If you’ve got $80 lying around, you can buy yourself a sealed copy of the 1970 Louie and the Lovers vinyl album Rise, or at least you could a few days ago when I searched for it on eBay. There was only one copy.

Aside from its rarity, what makes it so great, you might ask? Imagine four Hispanic teenagers from Salinas who sound like a mix of Los Lobos, Ritchie Valens, and Creedence Clearwater Revival playing rock, Tex-Mex, and Chicano swing, and you’ll have an inkling of why this highly collectible album is a record lover’s holy grail.

While it didn’t move a lot of units when it was released, it’s since become a cult classic due to its incredibly fresh sound, even today, 40 years after its release. Seriously, it’s a record that could have been recorded yesterday—there’s nothing dated about it.

The band even recorded a second album, a mythical thing since the master tapes were lost in a vault fire at Epic Records before it had a chance to be released.

While Rise was produced by Doug Sahm of the Texas Tornados and Sir Douglas Quintet fame, the untitled second album was produced by the legendary Jerry Wexler (he coined the term Rhythm and Blues and produced albums by artists such as Ray Charles, the Allman Brothers, Aretha Franklin, Led Zeppelin, Wilson Pickett, Dusty Springfield, and Bob Dylan). People have been dying to get hold of that second album for decades, but only one copy was known to exist, and it was on an old cassette tape privately held by ... wait for it … SLO’s own Louie Ortega, who is, after all, the famous Louie of Louie and the Lovers.

Now, for the first time ever, that second album along with Rise and some rare singles and outtakes are available together on a new CD issued by Germany’s Bear Family Records, titled Louie and the Lovers, The Complete Recordings. It retails for $24—not bad for a 27-track disc in an amazing package with great liner notes and some classic photos. Louie may look a bit older now, but I’m amazed how his voice sounds exactly the same after 40 years. Listening to these first songs he wrote, it’s clear his talent sprang forth early.

Bear Family was able to make a very fine copy of Louie’s old cassette tape, which blends right in with the tracks from Rise, which were recorded live in about 18 hours anyway. There’s something very immediate and energetic about the tracks, and Louie himself marveled over how fresh they sound, noting, “We were a bunch of kids and didn’t know anything about overdubs. Doug just said, ‘OK, get to it, boys,’ and we did.”

After the second album was lost and abandoned by Epic, Louie eventually drifted over to the coast, settling in SLO. He always kept in touch with Doug Sahm, who returned to Texas and formed the Tornados (with Augie Meyers, Flaco Jimenez, and Freddy Fender), who in turn tapped Louie as a guitarist and backup singer when
they toured and recorded. In fact, Louie won a Grammy Award with the Tornados in 1990 for the song “Soy de San Luis.”

Doug Sahm passed away in 1999, and while the Tornados were recording a tribute album, Louie was playing one of his songs in the studio between takes, and Freddie Fender tapped him on the shoulder and asked, “Whose song is that?”

“Well, write down the words. I want to record it.”

Louie’s song “Llevame,” which means “Take Me There,” will appear on the forthcoming Texas Tornados recording due out next year.

So, did Freddy sing it better?

“Different,” said Louie. “I sang background, but he did a great version. He’s a master.”

It was one of the last songs Freddy Fender recorded before he passed away in 2006. After his death, his estate essentially blocked the album’s release until now, and the Texas Tornados have since reformed with surviving founding members Augie Meyers and Flaco Jimenez, who along with Louie and other collaborators recently played Lincoln Center, the first of many new upcoming gigs the band’s going to do with Asleep at the Wheel.

Perhaps more importantly, to Louie anyway, is the Louie and the Lovers recording, which has reinvigorated his old bandmates. Frank Paredes is also a local musician, and he and Louie are starting a new side project, a trio called Rio Salinas; and former Lovers Albert Parra and Steve Vargas have agreed to reform Louie and the Lovers.

The music biz is a weird and wonderful thing, and it looks like Louie’s career is starting to fire on all cylinders again.

For now, you can see Louie Ortega play solo at Cambria Pines Lodge on Tuesday, Dec. 1, The Cliffs on Friday, Dec. 4, the Carlton (as a duo) on Saturday, Dec. 5, and Las Cambritas on Sunday, Dec. 6.

I bet if you ask, he’ll bust out some of those old Louie and the Lover tunes. After all, he’s going to need to brush up on ’em if the Lovers take to the road. 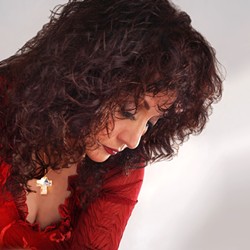 Aren’t you excited that Maria Grazia Rosa Domenica D’Amato is returning to the Red Barn Community Music Series on Saturday, Nov. 28? (7 p.m., or come at 6 p.m. for the potluck; $15 at the door). Huh? You don’t know who I’m talking about? Then let’s call her Maria Muldaur for short.

She got her start during the Greenwich Village folk heyday, where she shared the stage with Bob Dylan, among others. She also sang with the Even Dozen Jug Band, where she met and eventually married Geoff Muldaur. Apparently, after her “Midnight at the Oasis” fame, she’s returned to her roots, because her new band is called Maria Muldaur and Her Garden of Joy Jug Band. 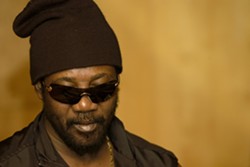 Reggae superstars Toots and the Maytals return to Downtown Brew on Tuesday, Dec. 1 (7:30 p.m.; 18-and-older; $27 presale or $30 at the door). If you dig your reggae upbeat and delivered by old-school masters, be there. Rey Fresco opens.

Like it or not, the holidays are upon us, so you might as well get yourself in the spirit, and there’s no better way than music.

Start the season off with Canadian Celtic powerhouse group Leahy, a troupe of eight musical brothers and sisters who have literally been playing together their entire lives.

Titled A Leahy Family Christmas, their show offers “an emotional ride through music, dance, and song. In some numbers, Leahy will be joined onstage by their children to sing, play, and dance—just as they would if they were at a Leahy gathering back home in Lakefield, Ontario Canada.”

There’s nothing like a chorus of unaccompanied trained voices singing in harmony, and that’s exactly what you’ll get on Wednesday, Dec. 2 when Cal Poly’s Take It SLO presents an a cappella holiday concert at 8 p.m. in Room 218 of the Davidson Music Center on campus. These 15 gifted students will fill you with seasonal spirit for the low, low price of $3!

You’ll want to take The Long Way Home home after you leave the show at the Porch on Friday, Nov. 27, which Skip Heller is playing to support his album called The Long Way Home. Heller plays at 7 p.m. during the 6:30 to 9:30 p.m. songwriters’ showcase. A graceful picker and charming vocalist, Heller sounds like Dave Alvin and writes songs like Lyle Lovett, which means he’s awesome.

Pianoman Brent Dannells is primed and ready to entertain at the Clubhouse on Saturday, Nov. 28 from 11 a.m. until 2 p.m. during brunch. Grab a bite to eat, sip a mimosa, and do your best to stump Dannells on a song request: “My request policy is that if I know it, no problem; if I have the sheet music, I’ll attempt it; otherwise, maybe next time, unless it’s for a Barry Manilow number. No offense to his fans, but he’s just not my type.”

How often have you pondered over these very pages, struggling to decide between a rock act, a reggae band, a funk outfit, or a blues group? You can have all four when The Matt Clark Band brings seriously good “World Rock” to Frog and Peach on Saturday, Nov. 28 at 10 p.m. Genre-jumping tunes with a positive message? Damn straight, Skippy!

Bob and Wendy along with opener Jameson Swanagon will hit the Steynberg Gallery for a free show at 3 p.m. on Sunday, Nov. 29. Everyone knows Bob and Wendy, but according to his website, “Jameson Swanagon is a guitar composer in the tradition of John Fahey and Leo Kottke, but with the pathetic minimalism of punk rock, and the experimentation of free jazz. His solo finger-style guitar concerts consist of short, dense improvisations as well as tightly composed vignettes he thinks of as sad toys.”

The Nathan McEuen Band, fronted by Nitty Gritty Dirt Band dude John McEuen’s son, is no stranger to SLO County, having played here several times. Now they return with a show at Paso Robles’ La Bellasera Hotel on Thursday, Dec. 3, at 7 p.m. Tickets are $15, reservable at  discoverypointentertainment.com or by calling 674-7060.

Astra Kelly, a Chicago native now residing in San Diego, will deliver her lyric-based melodic sound—an original blend of her Chicago roots in funk and blues merged with rock and acoustic elements—to Frog and Peach on Thursday, Dec. 3 at 10 p.m., with opener Richard March. Kelly’s a three-time San Diego Music Award nominee, and she recently inked a management deal with RYOT Entertainment, so get her while she’s hot. ∆

Glen Starkey wants a Red Ryder BB gun with a compass in the stock so he can shoot his eye out. Tell him how dangerous that is at gstarkey@newtimesslo.com

Leaning on the enchanted and leisurely vibraphone style of Arthur Lyman, the Chicago-based duo On Fillmore updates his lounge sound by cutting out the easy-listening schmaltz, and mixing in subtle dashes of esoteric arrangements. Composed of Wilco drummer Glenn Kotche and bassist Darin Gray, the focus is a laid-back version of Tortoise’s post-jazz bent, but reduced of any tedious excess. As the album title suggests, Extended Vacation feels comfortably undemanding. The ethereal fog that opens “Daydreaming So Early” parts to reveal a rainforest of exotica, complete with chirping birdcalls and the rumbling bellow of a jungle cat. It comes to its eleven-minute ending when cadence drumming and horns of a marching band begin to bleed into the sonics, yet somehow its effect is surprisingly unjarring. The ringing tones of the miniature composition “Off the Path” resemble the gamelan orchestras of Indonesia, while the bass line and xylophone in noir-tinged “Master Moon” compete with a clatter of percussion to feel provocatively thrilling. A hipped-up entry for fans of Martin Denny bachelor pad music or Thrill Jockey’s ambient jazz catalog.

An offshoot of Vancouver’s psych-stoner rock outfit Black Mountain, Lightning Dust plants its heels in the softer field of indie-rock, teetering on folk. Simple enough, but it’s the vocals of Amber Webber that open the ear for a deeper listen. Her quavering voice sits somewhere between Stevie Nicks and Grace Slick, drowning her emotive singing with near-breakdown vulnerability and unrestrained sentimentality. With the assistance of fellow Black Mountaineer Joshua Wells, Infinite Light opens with the gentle, earthy piano-rocker “Antonia Jane,” then offers one the few jump-starts on the album with bubbling synth and drum thrust of “I Knew.” “Never Seen” is so heavy in noir synths; it recalls Kate Bush’s ‘80s, and when “Dreamer” harnesses somber strings over the top of a military snare cadence, you sense the inventiveness of Fleetwood Mac’s Tusk-era being re-discovered. What Lightning Dust does isn’t new, but at 10 tracks, it’s delivered strongly from start to finish, with no filler to skip.