Writers-directors Dorota Kobiela and Hugh Welchman helm this story about impressionist painter Vincent Van Gogh (Robert Gulaczyk), exploring his complicated life and mysterious death. Shot with live actors, the film was then transformed into animation. A team of 115 painters working in Van Gogh's style painted each of the film's 65,000 individual frames. (94 min.) 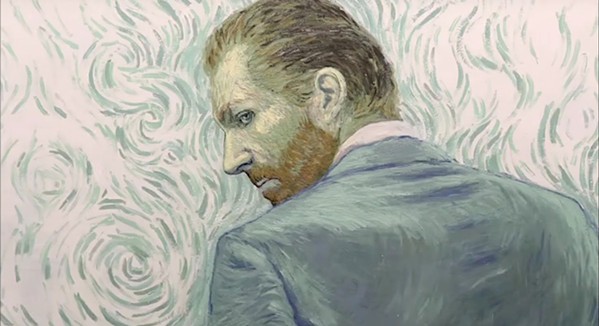 Glen What a spectacular and mesmerizing achievement! This film is a glory to behold, with paintings coming to life before your eyes. The story—written by the co-directors and Jacek Dehnel—takes place a couple of years after Van Gogh's death. When an undelivered letter is discovered from Van Gogh to his brother, Theo, the now famous artist's friend and frequent subject Postman Roulin (Chris O'Dowd) enlists his son, Armand (Douglas Booth), to carry the letter to Paris and search for Theo, since the forwarded letter had already been returned "undeliverable." Armand sets out on the train, and soon his task turns into a mystery story as he tries to find Theo, and barring him, his widow or someone else who should appropriately receive what was perhaps Van Gogh's last epistle. As Armand encounters those who knew Van Gogh and hears their stories, the film's animation shifts from the colorful impressionist swirling of Van Gogh's style to a smoothly painted black and white to depict flashback scenes. It's an interesting story that explores whether Van Gogh actually shot himself or was in fact shot by another. It also looks at Van Gogh's mental health and the effect he had on those he encountered. Even if you know all about Van Gogh's tragic life, you may learn something new, or at the very least be swept up in the unusual beauty of this unusual film.

Anna Loving Vincent is a visual feast. Solemn and built with the subtle air of a murder mystery, it's an astounding accomplishment by directors Kobiela and Welchman as well as the 100 or so artists that created each frame. Armand is a brooding pessimist with a fondness for too much drink, and when his father tasks him with the job of delivering Van Gogh's letter, he can't understand why his father would feel such urgency and importance in a dead, seemingly insane, man's words. The task soon takes on a life of its own for Armand, however, and he switches into detective mode as he tries to suss out who truly deserves to receive Vincent's final words. What unfolds is a story of a complicated and tortured talent, who is now considered the father of Impressionism, but at the time of his death had only sold one painting while completing more than 800. We all know the famous tales of Van Gogh, the nutty Dutchman who cut off his own ear and shot himself at a young age, but what Loving Vincent accomplishes is weaving the story of a man's life that far surpasses that of his death. With a format that's nothing if not a labor of love, this stylized, beautiful film is storytelling at its finest.

Glen It helps if you know Van Gogh's work, as many of the scenes are based directly on his paintings and portraits, which spring to life. The film especially concentrates on the complicated relationship he had with Dr. Gachet (Jerome Flynn), a frustrated artist in his own right, whose unorthodox treatments of troubled artists like Van Gogh have made him historically controversial. Was he helping Van Gogh or worsening his condition? Was he, in fact, exploiting him? After Gachet's death, art dealers had to try to distinguish the Van Goghs that Gachet "collected" (some argue "stole") and the many copies Gachet did of Van Gogh's originals. There's also an intriguing storyline about Van Gogh and Gachet's daughter, Marguerite (Saoirse Ronan). The film is certainly not the definitive version of Van Gogh's death—it raises questions but doesn't offer certain answers, just more conjecture—but it's entertaining, poignant, and visually arresting. See this one in the theater!

Anna I agree, this should be seen in a dark room on the big and clocking in at right around 90 minutes, it's a quick ride into another world. If anything, it's an excuse to stare at beautiful paintings and reflect on Van Gogh's brilliant style and get carried off into a compelling and reflective story. The weave of characters is delicate and complicated, not unlike the painter himself. Shifting focus from the desire to know how exactly his death came about to simply that of knowing his life—filled with passion and love, torture and solitude—the film does the artist justice with style. I love that we have the Palm Theatre to bring us films like this, and between the great ticket price and the delicious popcorn, this one is worth seeing in the theater any time you can.