Caught in the convergence of wildfire smoke wafting in from throughout the state and dust blowing from the nearby dunes, some of southern San Luis Obispo County's residents are about to receive a way to combat that air pollution.

At the Jan. 26 Air Pollution Control District (APCD) meeting, the board of directors approved a Clean Air Rooms pilot program helmed by fellow director and Arroyo Grande City Council member Jimmy Paulding. The project will provide free air purifiers to 600 low-income households in Oceano and on the Nipomo Mesa. 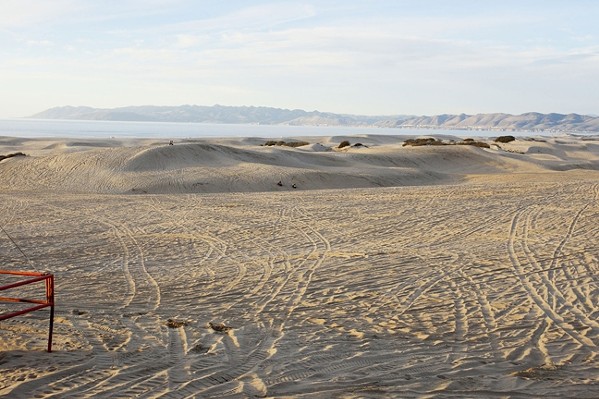 Called high-efficiency particulate air (HEPA) purifiers, the devices are supposed to reduce particulate matter by 90 percent. Further, the board agreed to allocate $100,000 to the scheme.

"We saw the wildfires in 2020 and the smoke impacts to our area. When our staff really started looking at developing a pilot program, they thought the best approach would be to focus on the areas of worst air quality in our county, which are South County, and the Oceano and Nipomo Mesa communities," Paulding told New Times.

"Air quality on the mesa is definitely not the worst in the nation in general, but it is true and fair to say that several times each year, the area has the country's worst short-term air quality, according to the EPA's official website," Tupper said.

Paulding mentioned that the Clean Air Rooms plan was inspired by the success of a neighboring county.

"Two or three months ago, I learned that the county of Santa Barbara was implementing a similar program. As one of the board members of the APCD, I agendized that a couple of meetings back," he said.

In a press release, Paulding stated that some of the most vulnerable South County residents are outdoor agricultural workers who are constantly exposed to dust matter from wildfires and dunes emissions.

Meghan Field, APCD's public information officer, said that several community members informed the agency that they couldn't afford to purchase air purifiers for their homes when smoke from wildfires crept in.

She said that providing these households with free HEPA purifiers could save them between $175 and $200 per device. Operating on a first-come, first-serve basis, APCD staff are aiming to hand out purifiers over a two-day period in late April.

The APCD will also work with the Center for Family Strengthening to provide translations in Spanish and Mixteco as a way to publicize the project. Residents can learn more details at the Clean Air Rooms website.

Paulding, who spearheaded the program, is also contending for the 4th District SLO County Board of Supervisors seat this year. Paulding identified public safety as a primary concern for his campaign, and that goes hand in hand with the air quality issues stemming from climate change.

"Clean air for our communities has always been a priority. When you speak to climate change, I like to talk about how wildfires and the impact they have on our community are a direct cause of climate change," Paulding said. "I can't say [climate change] will be a top item on my platform but public health and safety is a top item, and this is certainly one of those components of that." Δ