You can turn your back on a person, but never turn your back on a hangover, especially when it's waving a razor-sharp hunting knife in your eye. These were the Hunter S. Thompsonesque thoughts throbbing through my head as I struggled lamely to pay attention to the goings on of New Timesâ€™ weekly editorial meeting last Thursday. 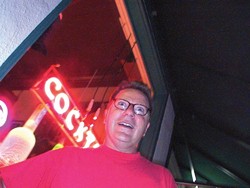 #As I looked around at the sagging faces of my co-workers, all of whom had joined me on a torturous four-hour pub crawl the night before, I knew we all had the same knife to our eye. Drinking is fun. Waking up the next day? Not so much.

Tomorrow (if youâ€™re reading this on St. Paddyâ€™s Day), millions of Americans will go mano-a-mano with their hangovers, a feeling like being wrapped in a syrup-soaked blanket while the sound of a thousand jet engines scream through layers of thick gauze. Why do we do this to ourselves? I tuned out managing editor King Harrisâ€™ bleating and began to search my mind, slowly piecing together the series of last nightâ€™s events that seemed to conspire against me.

In honor of the then-upcoming indulgence that is Saint Patrickâ€™s Day, we decided to bar hop from Paso Robles to SLO, chartering the super-swank rolling disco The Galaxy, Stardust Limousinesâ€™ flagship, a 22-seat party van replete with state-of-the-art sound system, 42-inch flatscreen TV, and fully stocked bar. All told, 16 of us staffers and friends, including The Shredder, set off on this little adventure, and I should have known straight away what kind of a night it would be.

Were we retarded for embarking on a night of binge drinking on a Wednesday? My pal Keith Bond seemed to think so. He took one look at the limo and said, â€œThis is like the New Times short bus!â€? Yes, it was going to be that kind of night.

Our hostess was Susie Martin, co-owner of the limo company. Her husband Ken was behind the wheel. Dressed in an aqua blue haltered cocktail dress, matching boa, and fuzzy black slippers, Susie sashayed around the bus building drinks for my companions.

As she handed a vodka and soda to my friend Jenny Anthony, Susie said, â€œThis is kind of weak, honey. Thereâ€™s no consistency on the bus. It depends on the bump or the curve. It could be weak or it could be really strong.â€?

Then she handed me a bucket of Jamesonâ€™s Irish Whisky â€” neat. Bump or not, thereâ€™s no way to pour straight whisky weak.

â€œThis is enough whisky to wash my car,â€? I said.

â€œWhat? Youâ€™ve never had a drink of alcohol in your life?â€? I asked incredulously.

Then something about blah, blah, blah. I donâ€™t know. I stopped paying attention as the warm whisky burned down my throat, washing over my mind like a whispered promise. I turned my attention to Jenny, whose black-and-white zebra-striped top foreshadowed the exotic animalistic night to come.

â€œWhere are we going first?â€? asked my bud Terry Joseph, an Australian whoâ€™s been known to throw back a rum and coke or two.

â€œWhat? I thought you did this before.â€?

#â€œYou did this before but you didnâ€™t plan it? Youâ€™ve got to have a firm hand in these things, like our oppressors during the colonization of Australia.â€?

Man, the progeny of criminals sure are pushy!

When we did this pub crawl back in 2002, we had meant to start in Arroyo Grande and go all the way north to San Miguel. We barely made it back to San Luis after only hitting four bars. I wasnâ€™t going to pretend to control the roiling monster that is 16 party animals set loose on a bus with an open bar and no worries about driving home. Iâ€™d rather herd cats.

The Galaxy pulled up in front of Busiâ€™s (pronounced boozyâ€™s), one of Pasoâ€™s most venerated watering holes. Jenny and Terryâ€™s fiancÃ©e Kathy Zurbach headed straight for the Ms. Pacman tabletop arcade game. Kerry Moore, a New Times sales associate, adjusted her cowgirl hat to a jaunty angle and made me wish for a mechanical bull. How far away was Big Bubbaâ€™s Bad BBQ? Too far, unfortunately.

The party was starting and everybody was a couple drinks in, feeling giddy and flirty and funny. New Times graphic designer Dora Mountainâ€™s piercing blues eyes were twinkling. My friend Larissa Collins, despite being in the middle of a three-month toxin flush (no alcohol, sugar, etc.) broke down and had a glass of red wine. New Times staff writer Jeff Hornadayâ€™s wife Franziska, normally a teetotaler, had a vodka and cranberry â€” â€œUm, yeah!â€? Associate Editor Kat deBakker, a woman so stoically dedicated and conscientious she carries a red Sharpie around to correct grammar and punctuation mistakes on signs, actually smiled at me. Put up a freakinâ€™ historical marker! Booze, sweet booze. It raises your confidence level, lowers your inhibitions, and makes guys like The Shredder drop his drawers and sit on an abandoned toilet parked behind a bar in Atascadero â€¦ weâ€™ll get to that later.

After Busiâ€™s, we made the short walk down the block to the Pine Street Saloon. Jenny and Dora, who had never met before tonight, started chatting each other up. Both girls stand nearly six feet tall and are drop-dead gorgeous. Guys were walking into walls and trying to pry their jaws off the floor. By morning, Jenny would find a note from Dora that read, â€œJenny, youâ€™re fun. Call me, Dora. 867-5309.â€? Okay, thatâ€™s not her real number. Simmer down, boys.

One of the nice things about Pine Street is its selection of salty snacks and processed meat products.

â€œWhatâ€™ll ya have, natural or unnatural?â€? joked bartender Leo Pisciotta.

Meanwhile, Johnny Cash sang â€œI Walk the Lineâ€? over the jukebox, reminding me of how happy I was to not be driving. By this time, not a one of us would pass a field sobriety test.

I asked Leo if he owned the joint.

â€œNo, Pat French does. And she runs this place with an iron fist. If you say the f-word, youâ€™re out of here.â€?

Yes, I was living dangerously.

I took a straw poll. Should we have another round here or get back on the bus and head to Atascadero?

We climbed aboard. Then I noticed Franziska looking at us curiously.

â€œBut thatâ€™s the whole point of getting drunk. You have an excuse!â€?

The music was thumping. People who were sitting demurely on the ride up were now laying all over each other, laughing and dancing in the aisle. The bus bounced and rolled. 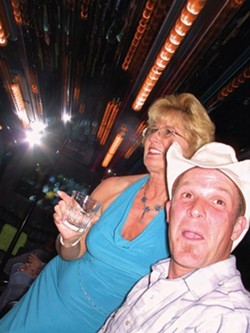 #Atascadero offers a wealth of bar choices, but when youâ€™ve got a rag-tag bunch of increasingly intoxicated partiers who are beginning to act inappropriately, thereâ€™s really only one place to go: the Ã¼ber-tony new Carlton Hotel. Looking positively aghast, the workers in the bar started stammering about how they were about to close. I could see the fear in their eyes, panic creeping up their collective spines. Iâ€™m sure we looked like a cross between the drunkards in early Irish novels and a team of yuppies. Thatâ€™s okay, I thought. The Carlton looks vaguely like a corpse laid out in a very expensive coffin. Or like that bar in â€œThe Shining.â€?

â€œItâ€™s Wednesday,â€? said staff writer John Peabody. â€œGive me a round of kamikazes.â€?

The bartender started mixing and pouring, pouring and mixing. A row of tall shot glasses lined the bar like sinister houses in a suburban housing tract â€” each one harboring a secret.

Peabody whipped out his credit card.

â€œI just took out a loan to buy these.â€?

When the bill comes next month, Iâ€™m sure regret will drain Peabodyâ€™s blood, but for now he said, â€œIâ€™m on a roll! I bought everybody shots. Iâ€™m kind of big pimpinâ€™ tonight.â€?

â€œExpense it out!â€? I yelled. â€œSteve Moss loves to pay for stuff like this!â€?

Abraham raised his glass and yelled loudly, â€œHereâ€™s to New Times for bringing us all together here.â€?

We were all out of our minds. I had abandoned taking notes, and what notes I had taken progressed from legible to some kind of cryptic runes â€” squiggly lines dancing across my notepad like Paleolithic graffiti. We stumbled en masse across the street to Terryâ€™s, a dive bar that embraced us as the rogues we had become. Soon The Shredder would find his way into the abandoned toilet, falling prey to photog Chris Gardnerâ€™s camera.

Things get fuzzy after that. Iâ€™m pretty sure I made a pass at Kerry (Iâ€™m a sucker for a hot girl in a cowboy hat), and Dora, and Jenny, and my married friend Larissa, and Kathy, and Kat. I may even have made a pass at Gardner, but I was blinded by the flash of his camera.

On our way back down the grade I heard Larissa tell her husband David, â€œYou should probably have a glass of water.â€?

â€œYouâ€™re probably right,â€? said David as Susie walked up and asked him if he wanted another drink. â€œYeah, Iâ€™ll have a whisky and coke.â€? 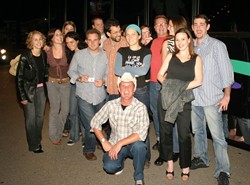 #I donâ€™t actually remember it, but we apparently made it to McCarthyâ€™s. I probably watched the Saint Patrickâ€™s Day countdown clock ticking off the days, hours, minutes, and seconds before the green beer starts to flow. I probably drank a beer and some Jamesonâ€™s. I probably slipped off a bar stool and landed in a pile of laughter. I probably did a lot of things, but I donâ€™t remember.

Booze will do that to you.

â€œOkay everybody, thatâ€™s it for this weekâ€™s meeting,â€? said King Harris, awakening me from my memories of last night.

â€œI feel like shit,â€? said Peabody, and I couldnâ€™t help but smile as I remembered â€” albeit vaguely â€” The Shredder squatting inside the bowl of the abandoned toilet.