"These times are getting scary. It's true. We must do what we can do. Careful what you say anymore, careful what you do. Careful where you go around here. What do you do when you're in hell? You just keep going! You. Just. Keep. Going," Donna Lu of Lu Lu and the Cowtippers sings on the opening track of the band's new seven-song EP, Just Keep Going.

Donna Lu and guitarist Todd Andrew wrote the song back in January before the pandemic brought live music to a screeching halt. 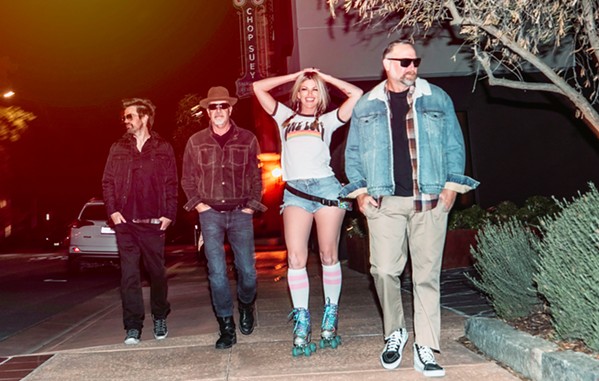 "We were going strong off our previous EP, One Boot Out the Window, doing awesome gigs at the Siren and Pour House, then, well you know, 2020," Andrew explained. "This first tune we wrote back in January, a simple writing session that me and Donna did at her place, wrote it in about an hour, not thinking much about how prophetic it would be for the coming year."

Prophetic indeed. Working musicians like the Cowtippers, which also includes Tyler Mitchell on bass and Dustin Mercado Willis on drums, found their music careers in jeopardy. But the show must go on, and the band has followed through with the release of the EP, now available on Apple Music and Spotify, and soon available on CD.

"We pressed up physical CDs, which will be unveiled on our EP release party at Pour House on Saturday, March 6," Andrew added.

The EP's second track, "Take Me," was "the first tune wrote under quarantine, back when we took it seriously," Andrew continued. "I made a guitar sketch and sent it to her through my phone, she wrote words to it about needing to get out of the house. This was only March, and we had no idea how long this thing would last."

Donna Lu sings, "Take, take me out. I've been dying here for days. I really need to taste, taste the music, give me some rhythm for my soul. I need a beat that I can dance to. I need a song that I can sing. Take me for a ride, on the Highway 1. I need a change of scenery. I've got a restless heart, I'm longing for some fun, a little sunshine on my face."

These songs are rocking, driven by Andrew's guitar, Donna Lu's bell-clear vocals, and the hard-crunching rhythm of Mitchell and Mercado Willis. This record rocks! Get some!

From SLO to Germany

I'm not sure if SLO pop singer Dasha is 20 or 21 now, but I've been listening to her music for years, since her dad and I are friends, and like a good father, he gushes about his daughter. Her talent landed her a single deal with Sony Germany a while ago for her song "Don't Mean a Thing," and she opened for a date on Lissie's U.S. tour. Now she's signed with Quadio Records to work in the writer's room with a number of pop artists.

Her first Quadio Records single, "$hiny Things," which was released last week, is a soulful dance pop number about the pitfalls of materialism.

"'$hiny Things' is all about confidence in the person you're with and within yourself," Dasha said. "The 'shiny things' are everything that other people have that you don't. Instead of letting that lead to insecurities, you gotta focus on all the shiny things that you have that others don't."

It's the first single for a planned EP, and you can listen to it on YouTube. Dasha's an artist on the rise, with confidence and inspiration to burn.

"I think about the women who came before me—my grandma was the only woman in her medical school class, and she was pregnant at the time. I think about my mom and my sister, who are so smart and confident, and keep going and pushing even harder than before," she said. "I get an idea and think, 'Oh my God, I have to write this song.' I'm obsessed."

COVID-19 restrictions continue to curtail indoor concerts; however, there is outdoor seating and dining at SLO Brew Rock until 8 p.m. You won't be inside near the stage with the bands, but it might feel closer than watching on your computer. Hear some great music, and if you're able, help out the food bank, which feeds food-insecure neighbors in your community.

If you're a Live Oaky, you've no doubt already heard that the annual music festival scheduled for June 18 to 20 will not be held in person this year. Instead, organizer and beneficiary KCBX 90.1FM—our local public radio station—will hold Live Oak on the Radio again, a mix of on-air programing and virtual concerts you can watch online.

My wife and our friends sure missed camping together last year, but we managed to re-create some of the experience in our driveway with our close friend group. This is KCBX's biggest fundraiser of the year, so if you're able, donate to keep this local gem on the air. Δ