Luck of the draw: Lucky B Design letters signs the old fashioned way

View a slideshow of Lucky B Design.

David Bond embraces the paintbrush like an old friend.

With classic country crooning on the stereo, he deposits a thick black line with cool precision—a technique decades in the making. Some artists grapple with the blank page: Bond contends with whole sides of buildings, sprawling glass windows, gleaming motorcycles, and shards of rusted metal. 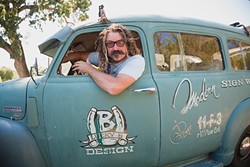 Today, working in his Templeton garage/studio, Bond’s transforming an old piece of wood into a fresh, hand-lettered sign. There is no “Command Z” in his world. The artist relies on his own two hands, and after 26 years in the biz, they’re more than capable.

“The younger generation is now relishing everything hand done and hand crafted,” Bond says. “People are sick of garbage. Whether it’s boots or hats or handmade signs, they want to pay for something done the right way.”

The longtime sign painter—known locally for painting iconic North County emblems for Hewitt Hardware, The California Mid-State Fair, and Vina Robles Amphitheatre, to name a few—has been in even higher demand as of late. Recent clients include Nike, Patagonia, and Volcom. They all want a taste of what flows  from Bond’s brush: a piece of the past.

“It’s just getting weirder and weirder, the people who call,” Bond says, brushing his long, wavy hair behind one ear. “I just worked for the Harley Factory in Milwaukee. They had me letter their ’51 Chevy truck. It’s pretty crazy for a Fortune 500 company to employ someone to do an old craft.”

Bond pauses to chuckle, as if he’s still coming to terms with his luck, adding, “They see the merit in it.”

Let’s get one thing straight: Sign painting didn’t used to be “cool.” Until the vinyl sign explosion of the late 1970s, darn near every sign you saw was created by a professional sign painter who learned the craft from another veteran of the biz. Now, the art form takes up a corner of the “specialty” market—a market that is currently exploding.

Bond’s work first caught my eye when I saw the ornate, curling script of “Molly Pitcher Brewing Company” adorning the façade and windows of the Atascadero watering hole. (He later re-painted the signs to reflect their name change to Tent City). I particularly enjoy the bar’s old-fashioned “beer” sign, complete with a pointing finger (he worked till 2 a.m. to get that one done). Now that I know Bond is behind so many of the signs around the county, I see them everywhere.

Skeptics might think the artist must rely heavily on computers to create his work, and that’s OK, according to Bond.

“You want to make it look good enough so that they think it’s done with a computer,” he says.

Bond’s not tooting his own horn; he admits there have been times he could have been helped by spell check (wineries isn’t spelled “winerys”). Still, the computer in Bond’s studio—which features the coolest Hamm’s Beer sign on the wall I’ve ever seen—looks more than a decade old.

The technology Bond takes the most stock in? His precious brushes—some dating back 70 years. He shows me a box of deadstock brushes that are too pretty to use just yet. Then, he fires up his electric “pounce” from the 1950s, which buzzes and fires little sparks as it transfers dots from one surface to another.

These are not the tools of a “fine artist,” and Bond’s hands are not the hands of a fine art painter. Weathered by the sun, his callused fingers are more akin to those of his father, grandfather, and great-grandfather: California ranchers who knew how to brand a steer, hitch a trailer, and mend a barbed-wire fence.

Bond named his design studio and logo after his  granddaddy’s cattle brand, “the lucky B.”

“I’m fourth generation Templeton, although I didn’t grow up here,” Bond says. “My grandparents were always here, so we’d come down constantly. A German Mennonite community out in Adelaide—that’s what I come from, and I’m related to a lot of people around here.”

The artist spent his early years on a Calaveras County ranch nestled near the Sierra foothills. The family eventually moved to Pleasanton, where young Bond doodled nonstop (much to the annoyance of all his teachers).

“My parents were supportive of my art and never told me I’d never make a living,” he says. “They wanted me to do it the best I could.”

So, Bond did a stint at the California College of Arts in Oakland. Spurred by a passion for history—he went on to study art history at UC Davis. It didn’t stick (the artist Bond wanted to study under, Wayne Thiebaud, had just quit).

“In what was probably a bonehead move, I bailed,” he says. “But the best thing about the way I grew up is that I didn’t have formal training. I created my own style.”

In 1989, Bond fell into the world of sign painting because, like all young college deserters, he needed a job. A 50-year veteran of the business showed him the ropes.

“The vinyl sign craze was going full force at that point, so the hand lettering I was doing was mostly on racecars and motorcycles—fancy stuff,” Bond says. “I just kept with it. I’ve always had a brush wet constantly.”

The act itself is a mix of work and zen. You can lose track of time.

“There’s days when I’ve lettered 16 hours and I can’t even see straight,” Bond says. “You can get in that groove and just cruise, sorting everything else out in your mind.”

More than two decades later, Bond’s still sitting at his workstation, most recently churning out a sign for Harmony Valley Creamery. What’s on his mind now? He says that’s easy: his supportive wife of 16 years, Teresa, daughter, Zoe (an entrepreneur like her dad), and all of the upcoming projects that keep rolling in. And they’re rolling.

With any luck, Bond will one day be 100 years old, painting sweet designs on old cars, fast bikes, and reclaimed wood.

“The reality of being self-employed is that you’re going to die at the easel, to some degree,” Bond said. “But the way I look at it, I get to live while I’m alive. Who wants to sit around and wilt? Every time I paint something really cool, I think, ‘That’s one more thing in the world that’s there after I’m gone.’”