A Cal Poly student returns to build her dream business

While searching for Luis Wine Bar I drove right past it on my first attempt to visit; its small, hanging sign was hidden by the trees and the large front windows blocked by big trucks parked in front. Once I parked and found it I was terribly disappointed to discover it was closed—the only day it’s dark is Tuesday. Luis really isn’t difficult to find, and once there you’ll never forget this modern wine and beer tasting room. SLO’s newest tasting room is in a great location on Higuera between Santa Rosa and Osos streets, between Firestone and Thai Classic on one side, and Black Horse Coffee and Fat Cats on the north side. The small front is deceptive, and once you’re inside you’ll be surprised by the spacious room.

Vanessa North, proprietor of Luis Wine Shop, described herself as a minimalist, yet her contemporary bar is quite comfortable. A cozy looking dark-chocolate-colored leather banquet runs the length of one wall, easily accommodating small parties and large. Large cushioned chairs with pillows and low tables take up the center space, next to the long bar. I enjoyed the seats near the enormous windows that open accordion style. There, you can sit and sip really good local wines and micro brews while watching people on foot and those driving along the always busy Higuera Street.

Luis specializes in Central Coast wines but North wisely brings in some of her favorite wines from northern California, France, or Italy in limited amounts. With nearly 30 beers offered, some on tap, most by the bottle, she’s keeping everyone happy at this new SLO hot spot. When I visited she had 46 white and red wines with half of them offered by the glass ranging from $7 to $16 each. She doesn’t load the featured wine list with any single variety of wine—only two Pinot Noirs were offered—to provide a wider range of possibilities. Every month there are two wine flights to choose from. In March the flights were Chardonnays and Syrahs, three two-ounce pours of each wine, priced $13 and $14 respectively.

“I like to offer wine flights made up from the same grape, but from different regions because they vary a lot,” North explained. For the Chardonnay flight, I chose a Paso Robles Chardonnay because it’s so different from the white Burgundy (in France’s Burgundy region the main white variety is Chardonnay; her third choice was a Chardonnay from Los Carneros). “It’s nice to compare and contrast to see how they differ, not necessarily to choose one over the other. It’s not a comparison.” Through the month of April she will offer a flight of Vermentinos and a flight of GSM blends (Grenache, Syrah, Mourvedre).

There are some wines that are only available by the bottle, but the list changes constantly. “Wines that are sold by the bottle will eventually be sold by the glass as we shuffle new wines in and replace wines that sell out. Most of the wines I bring in are from the Central Coast. But I like to add wines like Twisted Oak Tempranillo from Calaveras County, which was a favorite when I lived in the Bay Area, just because I can,” she added with a smile.

An industrial engineering major, North studied at Cal Poly and NYU. She started her career at Apple headquarters in Cupertino, admitting that after seven years she lost her passion for the job. That motivated her to return to SLO and begin building upon a dream she had only idly considered at first. But she had kept her eye on the building she now leases, which sat empty three years, and she found out it was affordable. She had to invest a lot in remodeling, including adding the accordion-style windows and a fire escape, but felt it was worth the investment. She intends to stay awhile. 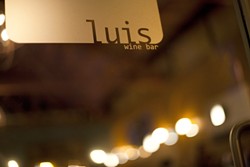 I did appreciate the fact that North seeks out the best locally produced foods for Luis. Her small menu features wine-friendly foods: pâté with cornichons and fresh bread; artichoke-rosemary cannellini dip with assorted veggies, crostini, or both; and an artisan cheese and meats plate with aged cheese and Allesina sopressa handcrafted salumi. The latter brand is by chef Antonio Varia of Buona Tavola.

Interestingly, online I found the Yelpers consistently mentioned the bacon s’mores. Go figure. That wouldn’t be my first choice while drinking wine, but North noted that many of her late night customers come in for a glass of Paso Port and cookies or a pot du crème. “I came up with the idea for bacon s’more which has a graham cracker crust, chocolate ganache with bacon pieces in it, marshmallow on top, and bacon sprinkles,” she said with pride. “We bring out a torch and melt the marshmallows at the table.”

Although she has a fairly-priced menu, North doesn’t mind if her guests want to bring in food from the nearby restaurants. She carries a few sodas and teas for those who don’t drink. Because her license is a strictly bar/tavern, Luis is not a restaurant, and no one under the age of 21 is allowed inside at any time.

North said she wanted Luis to be a place where people could get together with friends and stay as long as they like. “There’s no pressure to turn over the table or leave after a certain amount of time,” she finished. “We have retail sales but that’s not the focus. I compare it to going to a spa: You get to pamper yourself here. That’s what distinguishes Luis, it’s not a restaurant, it’s a lounge.”