LuLu and the Cowtippers release a new EP on Jan. 3 at The Siren

Photo Courtesy Of LuLu And The Cowtippers HOT TUBS AND ROCK 'N' ROLLERS Rock, cowpunk, and rockabilly act LuLu and the Cowtippers play an EP release party at The Siren on Jan. 3.

Was it the mid-'90s when LuLu and the Cowtippers were the hottest local band? It's all such a blur that it's hard to remember the dates and times, but it's easy to remember LuLu (Donna Lu Meazell) and her crystalline voice. Meazell has been in a number of local bands over the years, from Clearbell to President of the Pretty People and many more I can't recall.

This Friday, Jan. 3, Lu Lu and the Cowtippers will play an EP release party at The Siren (8:30 to 11 p.m.; 21-and-older; free). Known for "bombastic re-imagining of country staples," according to their current bio, the band also has some really hooky rock and rockabilly originals, as represented on their new eponymous five-song EP.

The collection, available to preview on ReverbNation.com, kicks off with "One Boot Out the Window," a straight-up '80s rocker that might remind you of Joan Jett or Stevie Nicks. The cowpunk-esque "This is Why" comes galloping up next with a boot-scooting backbeat that'll make you want to get up and dance. There's some wicked guitar licks propelling it along.

Things slow down a bit on "Own Way Home," a sultry slow-burn with an immediately accessible chorus that sounds positively haunting. Things return to a Cramps-like punk trot on "Red Flag," where Meazell laments, "Does anybody know how to love anymore? Does anybody want to be real?" The song drifts into Spaghetti Western territory and sounds like it's ripped from a Quentin Tarantino soundtrack.

The EP closes with "Believe Me," an arena-ready anthem that simply requires listeners to clap their hands over their heads. All told, this is an impressive return to the local scene for a storied band that's reinvented itself and once again risen like a phoenix from its own ashes.

Also this week at The Siren, check out Erin and the Earthquakes on Saturday, Jan. 4 (3 to 6 p.m.; 21-and-older; free), as they blend rock, funk, blues, and jazz, both covers and originals. Lead singer Erin Montgomery has a great voice and moves effortlessly between genres. 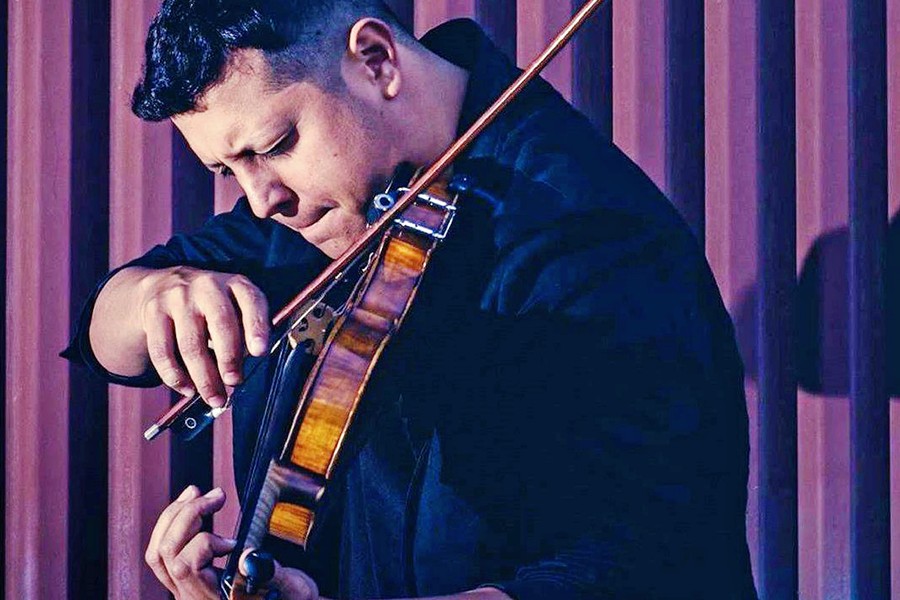 Later that same evening, Violin On Fire, featuring violinist Patrick Contreras, plays The Siren. He's an amazing player inspired by Latin, rock, soul, and hip-hop sounds. Dirty Cello will open (7:30 to 10:30 p.m.; $15 presale at Boo Boo's and eventbrite.com or $17 at the door).

Born and raised in Fresno, Contreras "has branded his style of playing with influences from Jimi Hendrix and Santana to become one of violin'srising stars with a completely unique sound," his bio reads. "Patrick thrills audiences wherever he goes with his original music and explosive interpretations."

The Bay Area's Dirty Cello takes a high energy spin on blues and bluegrass. Led by cellist Rebecca Roudman, "Dirty Cello is cello like you've never heard before. From down home blues with a wailing cello to virtuosic stompin' bluegrass, Dirty Cello is a band that gets your heart thumping and your toes tapping!" according to press materials.

Sounds like a great night of unusual string music!

Finally, Numbskull and Good Medicine Presents are bringing Scotland-born KT Tunstall to The Siren on Tuesday, Jan. 7 (7 p.m.; 21-and-older; $30 presale at Boo Boo's and eventbrite.com). The singer-songwriter and guitarist uses looping technology to create a rich, multi-layered sound, and she's got a sultry voice and style. Check out her YouTube video for her song "Black Horse and The Cherry Tree." She's remarkable!

Mississippi-born singer-songwriter Charlie Mars will open with his country- and folk-inflected pop. He self-describes as a "Guitar thwacker, boot stomper, yeller, story teller, part-time nomad. That about does it for now I reckon."

I have a feeling the state of the world might keep Who Can Sleep duo members Lex Helgerson and Dean Vivirito up at night. The married singer-songwriters often take on deep, dark subjects in service to their dark and dreamy songs, such as "The Debris of American Dreams," on which Helgerson sings, "Some nights I dream I'll wake like Marilyn Monroe, dream I'll be sluggin like DiMaggio, pick up a pen liked Miller did, everything clearer now, nothing hid. Waterbeds, motel rooms, collecting quarters and liquid screams, dirty rivers, kids who can't read. I can't eat, I can't breathe. I'm choking on the debris of American dreams. I'm choking on the debris of American dreams."

The song's accompanying video mixes America's splendor with its polluting ways—manufacturing plants, cookie-cutter housing tracts, cigarettes being manufactured, car-clogged freeways. It's a potent mix of words and images all wrapped in a haunting song. The song was also included on the 2019 list of top 10 singles by the Global Texan Chronicles.

The pair have been making music for four years, married for the last two, and according to their bio, "They've split up, musically, more than once to salvage their relationship. Yet out of their union come songs where their harmonies shine amidst a landscape that is dark, romantic, and dreamlike. Recent work includes covering Side A of Born in the USA and a music video for "Born in the USA."

I also highly recommend you check out their haunting video for their song "Jean Seberg," about the American actress who lived half her life in France and became famous for appearing in Jean-Luc Godard's 1960 New Wave film, Breathless. Seberg was a well-known supporter of the Black Panther Party, and she became the target of the FBI COINTELPRO project. She died at age 40 of a probably suicide, which her second husband blamed on the toll taken by the FBI harassment and false stories it placed in the media to discredit her. The video is an amazing visual and sonic interpretation of her tragic end.

This is a music endeavor that takes on tough, complex subjects with an artist's eye. Most worthwhile! Who Can Sleep plays Linnaea's Cafe on Saturday, Jan. 4 (7 to 9 p.m.; all ages; donations accepted). Δ