It seems inevitable. Our finest homegrown musicians too often take flight for wider skies. After enjoying SLO County success, garnering fans through touring, and feeling they’ve outgrown our area, off they go to Los Angeles, San Francisco, Portland, Seattle, and beyond. All too frequently, however, they disappear into the ether, lost amid the hundreds of other hopefuls who’ve pinned their dreams on big city success. Not so with Pam Delgado and Jeri Jones, two terrific local performers who in 2000 teamed up with Bay Area musicians Monica Pasqual and Renee Harcourt to form Blame Sally, an all-female group that’s developed a reputation for lush melodies, stirring lyrics, and spellbinding four-part vocal harmonies. 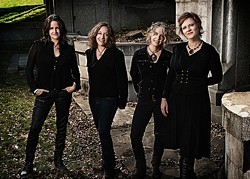 These four women’s talents are in full bloom on Speeding Ticket and a Valentine, their fifth full-length offering that takes its title from “Living Without You,” on which they sing, “sweet and sour at the same time/mink and a porcupine/speeding ticket and a valentine.”

They also just inked a five-year, three-album, mid-six-figure recording contract with Ninth Street Opus, the label behind the success of Carrie Rodriguez and Sarah Lee Guthrie and Johnny Irion. Considering the women joined forces while they were in their 30s and 40s, about the same time most bands are breaking up, theirs is a remarkable success story.

“One of the things I really enjoy about being in this band is how inspired our audiences are by us,” Harcourt said in press materials. “There’s a real openness and lovingness between the band members, and a lot of joy, and I think people get that when they watch us play. In addition to that, I think people find what we’re doing very inspirational, because it’s a time in your life when you’re thinking, ‘Am I doing what I really love to do?’ You start questioning your career choices around that time, along with a lot of things in your life. And we’ve been fortunate enough to be able to defy the odds and do what we love. People enjoy seeing that. There are a lot of people who become really connected to us, and fascinated by ‘Ooh, what’s their story?’ We’ve had  fanatical fans in their 40s and older, and also plenty of young girls who’ve been super into it. Just thinking that’s cool—‘Wow, that could be my mom!’”

See Blame Sally on Friday, April 22, when they play CD release shows at 7 p.m. and 9 p.m. in the Steynberg Gallery. Tickets are $20 presale, available at the venue. Call 547-0278 or visit steynberggallery.virb.com for more info. 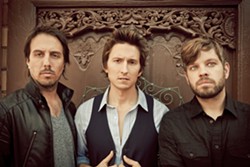 The Northstar Session will be swooping into the area this week for a blitzkrieg of appearances to promote their new album Late Bloomer.

They recently had their 15 minutes of fame when they appeared on the hit NBC show Parenthood on Sept. 21 (episode 2, season 2, “No Good Deed”), which you can see in the “gallery” section of their website: thenorthstarsession.com.

The infectious, lightly countrified rock act recalls the early work of Ryan Adams, though they also list Tom Petty and the Heartbreakers, Neil Young, The Beach Boys, Delaney and Bonnie, Little Feat, and others as influences. Haunting melodies, soaring vocal harmonies, and some hook-laden straight-up pop rock makes this trio a band worth following. 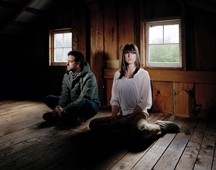 SLO Brew kicks off its full slate of shows with Phantogram on Thursday, April 21 (8 p.m.; all ages; $12 presale or $14 at the door). The trip-hop, psych-pop duo from New York features Joshua Carter (vocals, guitars) and Sarah Barthel (vocals, keyboards), and together they deliver “unique street beat rhythms, and psychedelic melodies, with combined technology and organic textures,” according to their bio. “The band practices and writes music in an out-of-town farm called Harmony Lodge, where they write and record songs using various samplers, tapes, records, synths, drums, and both percussive and stringed instruments.”

They’re touring in support of their Barsuk Records debut Eyelid Movies. Hot As Sun will open the show.

On Saturday, April 23, hear some great music and support a great cause when the Modern Music Academy (MMA) presents The Second Annual Big Benevolent Bash, with proceeds benefiting Guitars Not Guns (7 p.m.; all ages; $6). Featuring performances from MMA’s talened roster of students, the evening should be full of surprises, and 100 percent of the proceeds benefit the Arroyo Grande chapter of Guitars Not Guns, which helps needy kids with instruments and music lessons. 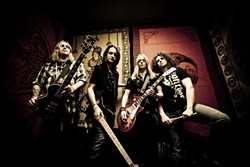 Get ready to pray to the gods of rock when Black Stone Cherry and local act Rusted Stone turn SLO Brew into a cauldron of head banging rock’n’roll on Tuesday, April 26 (8 p.m.; all ages; $14 presale or $16 at the door). Roadrunner recording artist Black Stone Cherry promises to bring “loud guitars and larger than life drumming … together with storytelling poetry.”

Steve Key’s Songwriters at Play has a great mix of local and touring singer-songwriters to keep you entertained for the week, starting on Thursday, April 21 (all ages; 6:30 p.m.; pass-the-hat), when Jade Jackson plays The Porch. Merle Haggard, The Charlie Daniels Band, The Devil Makes Three, Phil Vassar, and Billy Carrington are a few of the acts she’s opened for, and she recently released her engaging debut, Vintage Heart.

On Sunday, April 24 (all ages; 1 p.m.; pass-the-hat), at Sculpterra Winery, hear local radio personality and performer Rob Kimball, the host of public radio’s Pickin Up the Tempo Tuesdays on KCBX 90.1FM. Rob plays guitar and banjo, and is especially known for his work on the 12-string guitar. His roots are in folk, country, bluegrass, western swing, blues, and rock. Mika Ben-Yami, an independent Los Angeles singer-songwriter, will also perform.

I haven’t seen her perform in awhile, but it appears one of the county’s hidden treasures is coming out of seclusion on Tuesday, April 26 (6:30 p.m.; all ages; $5), at the Steynberg Gallery when The Karen Tyler Trio with Valerie Johnson & Al B Blue are the featured act. Tyler, an award-winning singer-songwriter and helluva guitar player, is teaming with Nipomo-based blues, jazz, and gospel duo Valerie Johnson & Al B Blue for what promises to be a memorable show.

Her hometown is Paris, but as her bio says, she’s “French at heart, but with a soul that’s truly international. Drawing from her multi-ethnic French/Chinese/American upbringing, her music fuses styles and languages, taking the listener on a twisting journey out of the French chanson tradition, into the lands of gypsy jazz, Chinese and Latin American folk music, and into the wilderness of her imagination.” 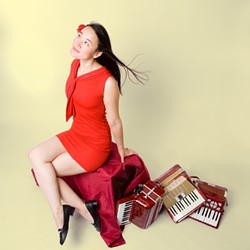 She now resides in Los Angeles. Le Secret is Finchot’s EP follow-up to Le Chemin, which won over audiences in France, China, Canada, Mexico, and across the United States. You’ll love her vocals and performance on toy piano and accordion, backed by a hot-hot-hot band consisting of clarinet/sax, guitar, and upright bass. Don’t miss Jessica Finchot on Sunday, April 24, at Steynberg Gallery (7:30 p.m.; all ages; $10 presale or $12 at the door).

Daniel Whittington, formerly of the SLO band Rhodes (which opened for Aerosmith in 2005), left town years ago and returned to his hometown of Austin, and the return to his roots has done him good. His 2010 album Things Change is a terrific collection of singer-songwriter tunes, immediately accessible, hooky, and worthy of repeat listening. Not only are Whittington’s songs infectious, but he’s got a rich, compelling voice you just want to keep hearing, like a comfortable pair of shoes or a T-shirt worn to perfection. Don’t miss him upon his return to the area, starting on Thursday, April 21, at Atascadero’s Haven Bar at 6 p.m.; then Friday, April 22, at Marisol at the Cliffs Resort at 6 p.m.; and finally Saturday, April 23, at the Cliffs Resort Bar at 4 p.m. You won’t be disappointed!

“Well, this is it … our last performance before our trip overseas,” said Café Musique’s Duane Inglish, who with his group will be entertaining on a cruise to France. Lots of local folks have signed up to go along for the ride. “We’ve worked our behinds off on new material and the past couple months have really helped us fine-tune our music.” Amen to that! The last time I saw them they were off-the-hook awesome—the perfect blend of poignant, funny, and stunning. See Café Musique on Saturday, April 23, at 4 p.m., in Steynberg Gallery ($15; 547-0278). Their sound is the perfect marriage of classical, swing, gypsy, folk, tango, and originals. 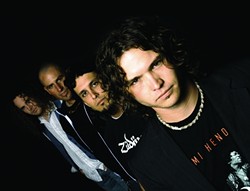 “Our band Motive is bringing Vains of Jenna to SLO to play with us at The Grad on Saturday, April 23,” wrote Rick Sr. “Vains of Jenna is a Monster Energy Drink-endorsed band that last year did an international tour and are from Sweden but for now based out of Los Angeles. They’ve been on MTV a few times and on the show Jackass.” Sounds like a real rocker.

The Dane Drewis Band, which called their 2010 debut Rock and Soul “both incendiary and nostalgic, combining the melodic feel of Motown and classic ’70s rock with a vocal style that is described as a mix of Bruno Mars, John Mayer, and Jack Johnson,” plays Frog and Peach on Saturday, April 23, at 10 p.m.

Local rock act Criticnue killed it at last year’s New Times Music Awards, and I’m expecting no less when this grunge-sounding rock act hits Frog and Peach on Tuesday, April 26, at 10 p.m. The band owes much of its excellence to its charismatic front man Heath Seager, but he gets plenty of help from Zac Cornejo (percussions), Robby Hart (lead guitar), and Dave Abbott (bass).