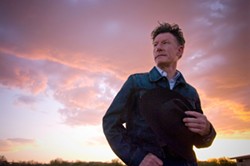 It’s pretty hard to pick a favorite Lyle Lovett album. His self-titled debut was a revelation and contained the hit “Cowboy Man,” not to mention “God Will.” But then Pontiac had “Give Back My Heart,” “She’s No Lady,” “I Loved You Yesterday,” and “If I Had a Boat.” Man, this guy writes great songs!

His third album, Lyle Lovett & His Large Band, had his excellent version of “Stand By Your Man,” plus “If I Were the Man You Wanted” and “Here I Am.” Of course, I loved Joshua Judges Ruth and its somber tone and songs like “You’ve Been So Good Up to Now” and “North Dakota,” though it’s hard to resist “Skinny Legs” off the I Love Everybody album, or “Don’t Touch My Hat” off of The Road to Ensenada. And let’s not forget “My Baby Don’t Tolerate” off of the album of the same name, or “South Texas Girl” off of It’s Not Big It’s Large.

Lovett’s career has been pretty amazing between the music and the acting in films such as The Player, Short Cuts, Prêt-à-Porter, Bastard Out of Carolina, The Opposite of Sex, Fear and Loathing in Las Vegas, Cookie’s Fortune, and The Open Road.

Then there was that much publicized marriage to Julia Roberts and the four Grammy Awards. Not bad for a notoriously odd-looking fellow.

I’ve seen him several times in concert and he never fails to deliver a great show filled with engaging songs. See for yourself next Thursday, Aug. 8 when Lyle Lovett & His Large Band plays the Vina Robles Amphitheatre (8 p.m.; all ages; tickets range from $43 to $83; visit vinaroblesamphitheatre.com).

You win when SLO Brew throws down three great shows this week, starting with punk legends Guttermouth and Agent Orange playing Thursday, Aug. 1 (doors at 8 p.m.; all ages; $15 presale or $17 at the door). Huntington Beach-based Guttermouth got started in 1988 or ’89, though its various members were part of the early ’80s Orange County punk resurgence in various other acts. The roots run a bit deeper for Agent Orange, which formed in Orange County in 1979 and made their bones with the song “Bloodstains,” a demo of which made its way to DJ Rodney Bingenheimer of KROQ and soon became one of his show’s biggest hits. Old school punk from the guys who started it all in California! 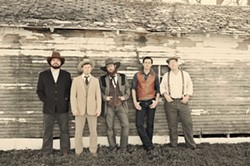 On Friday, Aug. 2, Night Riots will be releasing their new EP Young Lore, which they haven’t supplied me with, so I can’t tell you how awesome it is (WTF, guys? Get your shit together!). Finish Ticket will open the show (doors at 7 p.m.; all ages; $13 presale or $15 at the door). Night Riots, previously called PK and named “one of the top 16 unsigned bands in North America” by Rolling Stone magazine, were just featured in a full episode of Rockonomics on FUSE TV.

Then on Saturday, Aug. 3, check out Turnpike Troubadours (doors at 7 p.m.; 21-and-older; $12 presale or $15 at the door). This Americana act has won the hearts and minds of the hard to please Red Dirt circuit through tenacity and authentic music. “When we first started playing, people couldn’t have cared less that we were there,” recalls Troubadours’ front man Evan Felker. “They were there to drink beer and raise hell and they didn’t really care what music was playing while they did it. But as we went on and as we got better, they started to listen. I mean, they were still drinkin’ plenty of beer, but before too long, they were actually coming to hear us and asking us to play our songs, and not just covers of traditional favorites and all the other stuff we’d been doing.” The band’s 2012 album Goodbye Normal Street was called “the most unjustly overlooked Americana album of 2012” by the Washington Post, which added, “Whether it originates from curving two-lane blacktops, a pretty rich girl, or an army enlistment, the whiff of danger in these songs is thrilling.”

Austin-based singer-songwriter Susanne Abbott plays Linnaea’s Café this Thursday, Aug. 1 from 8 to 10 p.m., delivering an evening of contemporary folk rock and Americana balladry. Her most recent release, No History of Prevention, features songs that echo many of her musical influences: Terry Allen, Neil Young, Stevie Wonder, and even Stephen Sondheim.  She’s recorded with the likes of Darden Smith and the late great blues master Doyle Bramhall, Sr. According to the Austin Chronicle, “In a world where the [number] of navel-gazing folkies is at an all-time high, Susanne Abbott stands apart with a vision that’s equally soulful and dynamic.”

On Friday, Aug. 2, the Guy Budd Band with guest vocalist Inga Swearingen will perform blues, rock, R&B, and jazz songs as the next installment of the Concerts in the Plaza series from 5:30 to 7:30 p.m. in front of the SLO Mission. Budd’s a ripping guitarist and Inga’s got a heart-melting voice, plus you can buy beer and food!

The “Cabin by the Sea Tour” is coming to Avila Beach Resort on Friday, Aug. 2 (gates at 5 p.m.; show at 7 p.m.; all ages; $25 at Vallitix) featuring the Dirty Heads, the Expendables, and local favorites Bare Feet. The Dirty Heads of SoCal are touring in support of their newest album, Cabin by the Sea, another bracing collection of reggae, hip-hop, and ska-punk tracks that’ll have you on your feet. They’re perhaps the most prominent of the Sublime-inspired bands. The Expendables hail from Santa Cruz and also deliver jumping reggae influences by ska, surf rock, and punk. This show’s going to be a party!

Oliver Mtukudzi and The Black Spirits are Afropop legends in Zimbabwe, and now they’re coming to Castoro Cellars on Saturday, Aug. 3 at 7 p.m. ($25; call 238-0725 or purchase at Boo Boo Records). Mtukudzi has a deep, gusty voice and a talent for writing songs that reflect the daily life and struggles of his people. Known as “Tuku,” he’s earned a devoted following across Africa and beyond. He’s released 41 albums, and his music is influenced by “a humanist chimurenga ethos, which, in turn, is inspired by the hypnotic rhythms of the mbira (thumb piano),” according to press materials. “His music also incorporates South Africa mbaqanga, the energetic Zimbabwean pop style jit, and the traditional kateke drumming of his clan. One of Tuku’s biggest fans is Bonnie Raitt, who has not only called Tuku ‘a treasure’ and recorded a cover of his ‘Hear me Lord,’ but also credits Tuku as the inspiration for the song ‘One Belief Away’ on her album Fundamental.” For an additional charge of $15, this SLOfolks concert will also feature a catered dinner at 6 p.m. by Thomas Hill Organics.

Broadway performer Gale McNeeley (and accompanist Betty Faas) return to Steynberg Gallery on Saturday, Aug. 3 (8 p.m.; all ages; $10; call 406-4997 for reservations) to mount “a unique show of ‘Songs and Satire,’” according to McNeeley. “You’ll hear Tom Lehrer’s whacky songs like ‘Poisoning Pigeons in the Park,’ ‘The Vatican Rag,’ and ‘The Masochism Tango.’ You can also look forward to ‘Rinse the Blood Off My Toga’ and ‘Shakespearean Baseball Game’ by the Canadian comedy duo, Wayne and Shuster, who Ed Sullivan featured on his show 67 times.” The show will also feature a singing nun who’s running for Pope, Sister Dominiqee-niqee-nique, who will sing about her new job as manager of a medical marijuana club at Leisure World. McNeeley was in the original cast of Two Gentlemen of Verona with Jerry Stiller and Raul Julia, and appeared on Broadway in Cyrano with Christopher Plummer. He originated the character of “The Ghost” in the world premiere of the musical The Ghost & Mrs. Muir. This should make for some wacky entertainment.

New York prog rock band Event Horizon plays Saturday, Aug. 3 at Frog and Peach from 10 p.m. to 1 a.m. The band formed in 2008 and draws on influences from the classic rock bands of the ’60s and ’70s, as well as progressive bands like Yes, King Crimson, and Rush.

The Annual Sizzlin’ Summer Concert Series and Farmers Market at Ramona Garden Park in Grover Beach continues this Sunday, Aug. 4 from 3 to 6 p.m. with Local Vocals, featuring Jim Love and Kevin Mounts performing vintage and contemporary tunes “that set your toe a-tapping,” according to their Facebook page.

On Sunday, Aug. 4, the Famous Jazz Artist Series at D’Anbino in Paso Robles features Andy Martin, regarded by both musicians and critics as America’s leading jazz trombone artist. Besides his numerous jazz awards, Martin is one of the Hollywood recording studios’ busiest players, performing on countless film scores as well as annual orchestral appearances on the Academy Awards and Emmy presentations. Bassist Dylan Johnson and drummer Darrell Voss will back him up, and series co-producers Charlie and Sandi Shoemake (piano/vibraphone and vocals) will sit in. There are two shows, 4 and 7:15 p.m., for $15 each, or see both for $20. Call 927-0567 for reservations.

I think there’s something in the air down near the beaches of the South County. It started with the Dunites, who believed the Oceano dunes were one of the creative energy centers of California, and it never stopped. Take, for instance, the Spiritual Center for Creative Thought in Grover Beach, which seems to be continuing the Dunites’ creative work. “We at the Spiritual Center for Creative Thought in Grover Beach are proud to announce a transformational concert featuring Anton Mizerak and Laura Berryhill of Shastasong Records. They will be here—at 555 South 13th St.—on Monday, Aug. 5 at 7 p.m.,” wrote Rev. Jacque Edmiston, music organizer for the center. The duo plays music for healing and relaxation, playing sacred world chants, songs for new beginnings, songs for when angels dream, Celtic-inspired song, songs about myths, and participatory singing. Tap into your inner hippie and be creative! 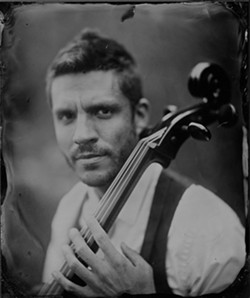 Denver-based cellist Ian Cooke plays Linnaea’s Café on Tuesday, Aug. 6, touring in support of his sophomore album Fortitude, which showcases his wide array of sounds, from “playful to dark and sincere at the flick of a cello bow,” according to his press materials. “Splicing in elements of indie, classical, progressive rock, and more, the album builds on the foundation laid down by his previous album, The Fall I Fell, and expands it with stronger writing and loftier concepts.” The show is at 7 p.m. and is free.

Lastly, Early Birdz and the Bees, an all-female soul-folk band based in Los Angeles that boasts intricate three-part vocal harmonies, is touring with The Steady 45s, a traditional ska and rock steady act, playing Linnaea’s Café from 7 to 9 p.m. on Wednesday, Aug. 7.