Lynch to appeal after sentencing 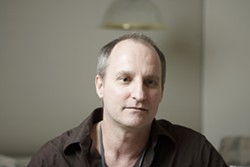 Local medical marijuana purveyor Charles Lynch is expected to be sentenced to five years in prison April 23 after the Department of Justice declined to intervene in his case. Lynch was convicted last summer in a federal court on five felony counts related to growing and selling marijuana from his Morro Bay dispensary. Lynch’s attorneys said they would appeal the conviction immediately after sentencing.

Lynch appeared in court March 23 for sentencing but was not given his punishment that day. Judge George Wu cited statements made by Attorney General Eric Holder indicating the federal government was changing its policy on medical marijuana to recognize state laws. At the March court date, Wu asked the prosecutors from the U.S. Attorney’s Office to get a Department of Justice statement clarifying any policy changes and how they might affect Lynch’s case. Many of Lynch’s supporters hoped he would not be subjected to the five mandatory years he faces now. The Justice statement was issued April 17 but it did nothing to help Lynch.

Holder made statements in March indicating that the feds would not raid medical marijuana dispensaries unless they violated both state and federal law. California was the first of a dozen states to allow the use of marijuana with a doctor’s recommendation, but the federal government has not recognized that the herb has any medical value, so all dispensaries were deemed to violate federal law.

Lynch’s case is unusual because the local Sheriff’s Department, not the feds, started the investigation into his dispensary. Though the investigation played out over a year and included the use of informants, undercover agents, and stake-outs, the sheriff never obtained a search or arrest warrant for violations of state law and no state charges have been brought against Lynch.

Nonetheless, the Department of Justice statement opined that “…The investigation, prosecution, and conviction of Mr. Lynch are entirely consistent with Department [Of Justice] policies as well as public statements made by the Attorney General.”

Lynch’s public defender, Reuven Cohen, said he is disappointed with the statement.

Lynch is scheduled to be sentenced at 3 p.m. His attorneys said they will immediately file an appeal.