A Cal Poly club shares its heritage, and art

For many children growing up in Mexican or Mexican American homes, watching ballet folklorico is a traditional family pastime. When those children grow up, it’s not always easy for them to find organizations that encourage and expand upon their interest in their cultural heritage—especially for students attending Cal Poly in San Luis Obispo.

In past years, the group has included students from all cultural backgrounds, but this year Castillo says the estimated 15 participants all hail from a background that includes childhood exposure to ballet folklorico. Still, their numbers are smaller than he would like. 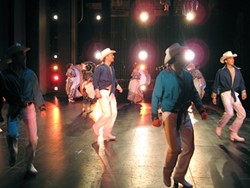 “It’s hard sometimes within our own culture,” he admitted. “Some students are reluctant to come in and express how they feel about our culture. That’s a big problem with other Hispanic clubs on campus, too.”

Despite pressure for students from different cultural heritages to assimilate into what’s perceived as mainstream American culture, and despite the fact that the campus is predominantly white, the club has been going strong for 20 years.

Their first quarter, they studied the folkloric dance of Sinaloa, one of Mexico’s 31 states. It’s one of the country’s largest producers of agriculture and has the second largest fishing fleet. The region’s dance has an upbeat music style demanding fast movements from the performers. The costumes are tropical, decorated with floral patterns. It’s the easiest of the dance styles.

Traditionally the club starts with the simplest dance, then progresses to the more difficult footwork as the quarter progresses. Some of the students have dance experience before they join the club, but it’s not a requirement, and many, like Castillo, do not. Sylvia Aldana, one of the club’s founders, still invests a great deal of time in the club, though she’s long since left the college. She draws on more than 20 years of experience and study to teach club members the dances of each region.

After learning the dance style of the Sinaloa region, the club progressed to Veracruz, a state with nearly 500 miles of coastline on the Gulf of Mexico. The music, called banda, is usually performed by a large ensemble. The dance style is more complicated, riddled with intricate footwork, and the performers wear white—pants and shirt for the men and a lace dress for the women. The men accessorize with a red sash and straw hat, and the women carry fans.

The final dance style is calabaceados, originating from Baja. The dance represents the ranches that dominate the region. Dancers wear traditional western attire, including cowboy hats and shirts. Castillo describes the music as norteño.

In addition to their own performers, and an additional dozen alumni who will likely help with the show, Imagen y Espiritu is hosting ballet folklorico from UC Santa Cruz and Paso Robles. The group from Santa Cruz will perform choreography from the state of Guerrero, where performers dance the cumbia and the salsa. And the Paso Robles folklorico group is representing the state of San Luis Potosi.

For those who haven’t grown up watching ballet folklorico, Imagen y Espiritu offers a glimpse into another country and a heritage shared by many Americans. And for anyone who’s been privileged enough to grow up watching the many regional dances, the performance should feel close to home. But one of Castillo’s primary goals is to make sure that his own cultural and artistic heritage is shared with people from all backgrounds.

“Our main goal is just to tell SLO County and everyone else around that if they want to learn something new about our culture, they’re welcome to come check us out,” he said. “We don’t segregate.”