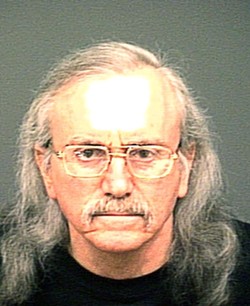 An Arroyo Grande man convicted in June of weapons-related charges has been sentenced to four years in state prison.

Howard Krinsky, 62, had contended throughout his two-week trial that he was a collector of rare and historic guns, but prosecutors alleged he provided illegal weapons to a close friend—Alan Garrison, who is currently serving a six-year sentence—for resale. Sheriff’s deputies found a cache of fully automatic rifles and other weapons and ammunition considered by state law to be “destructive devices,” including a 20 mm anti-tank cannon. In all, police confiscated more than 200 weapons from Krinsky’s home, including 26 illegal weapons.

So what happens to all those guns?

“We have a disposal order for some of the illegal weapons,” said Deputy District Attorney Karen Grey. She added that the Sheriff’s Department had expressed interest in donating others to the Veterans’ Association—after being demilitarized—because of their historic value. The confiscated legal weapons will be sold to local licensed gun dealers, the proceeds from which will go back to Krinsky, Grey said.

On May 21, Superior Court Judge Michael Duffy found Krinsky guilty of all charges after the accused had waived his right to a trial by jury. Krinsky faced a maximum sentence of more than
eight years.