For certain musicians, making music is like exploring a wide-open playground full of the best toys imaginable, and instead of, say, always playing tetherball or hopscotch at recess, every time they hit the playground they fearlessly try something new. That’s how I think of Forrest Day, whose joyous songs sound like they were constructed in Tom Waits’ mad scientist laboratory by Oompa-Loompas hopped up on bennies.

The singer-songwriter-producer-multi-instrumentalist-indie-rap- experimentalist had this to say in his bio: “I took down the cheesy bio. I’m Forrest Day, but my name also represents the illest eight-piece band you ever heard. The tracks you hear on this page are me in the studio with some great help from Chocolate O’Brian and Luke Dillon. I’m a beatmaker, songwriter, sax-player, and singer. SINGER!!! Now, however, I am going to record this beautiful band. If you have not been to a show then you are missing out; it is ridiculous! We are at our best now, a year and a half old, and beginning to reach other cities and states. My style is free, and I will continue to do whatever I want, even if it costs me your affection and attention. I am going city-by-city and showing people what we do, a truly grassroots effort. So come see us, and support real music, from people who do it for the love of it. Tell somebody!!! See you, and check back once in a while and see if we’re in town! And if we’re not, then help us get to your town! Love ya, good luck with yours!”

Music continues at SLO Brew on Friday, July 22, with reggae act Bare Feet (7:30 p.m.; all ages; $7 presale or $8 at the door). “We’ve been working with Kip Stork at Avalon Studios in San Luis Obispo,” said the band. “Closing in on finishing the mixes of our first studio EP. It should be ready for your listening ears by the end of September. We hope to see some new and old faces at our upcoming shows. Spread the word and invite friends and family to come out!” Tomorrows Bad Seeds and Klockwyze open.

On Monday, July 25, see former Cross Canadian Ragweed frontman Cody Canada & The Departed (7:30 p.m.; all ages; $10 presale or $12 at the door). He was just 16 when he made his way from Yukon to Stillwater, Okla., where he discovered a creative nirvana of musicians. “It was like the greatest place on Earth,” Cody recalls. “I met Tom Skinner, Scott Evans, Bob Childers, Jimmy LaFave, the Red Dirt Rangers, and they were all playing this really, really good music. It was kind of in that same vibe as the Allman Brothers and The Band. But what came out of it was really diverse. There were more country acts like Jason Boland. The All American Rejects were the rock guys. Then you had the whole Red Dirt hippie thing … I didn’t even know what Red Dirt was until somebody told me. I got turned on to it all, and it’s stayed with me ever since.”

Finally, on Wednesday, July 27, the incredibly dark, romantic, psychobilly act Nekromantix (8 p.m.; all ages; $13 presale or $15 at the door) returns to the Brew. They describe their music as “Elvis meets the Wolfman” with a punk attitude and a universe of monster-movie lyrics.

Steve Key’s Songwriters at Play showcases keep the talent coming with a featured headliner and several other performers playing four-song sets. For instance, on Thursday, July 21, you can see The Sassafras Union at The Porch (6:30 p.m.; all ages; pass-the-hat). They feature “high-spirited harmonies backed by banjo, fiddle, and guitar.” Led by Santa Maria songwriter Benjamin Ayers, the group includes multi-instrumentalist and singer Madalyn Hunter, Kate Feldtkeller (violin and vocals), and Joe Malfo (bass), describing their style as “65 percent folk, 20 percent blues, five percent rock, five percent techno, and five percent of something else.” Melody Stanford, Madalyn’s older sister, who was last year’s winner of the Clark Center’s Search for the Stars competition, is the special guest! 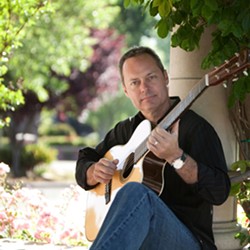 On Monday, July 25, check out headliner Janet Robin when she plays The Spot (7 p.m.; all ages; $10 at the door). The L.A.-based singer-songwriter tours all over the world as a solo artist, and sometimes in the role of backup guitarist to the likes of Michelle Shocked and Fleetwood Mac’s Lindsey Buckingham. As a teenager, she studied guitar with Randy Rhoads (Quiet Riot, Ozzy Osbourne), and became the lead guitarist for the all-female rock band Precious Metal. Expect powerful, passionate guitar work and an electric banjo played through wah-wah effects. Local guitar wizards Dorian Michael and Tim Pacheco will be there, plus an opening set by Craig Louis Dingman.

Finally, on Tuesday, July 26, Chi McClean is the featured performer at the Kreuzberg showcase (6:30 p.m.; all ages; pass-the-hat). Chi (pronounced Chai, like the tea) debuted in 2009 with Something Out There, an album that has received steady airplay on The Krush 92.5 FM.

Every July, sleepy Paso Robles hosts the biggest little fair anywhere, and they’re doing it again this year. As usual, there’s way too much happening at the California Mid State Fair for me to list it all, so your best bet is to visit their website at midstatefair.com, but here’s what I’d see.

The Counting Crows play the Grandstand Stage on Sunday, July 24, at 7:30 p.m., with tickets ranging from $25 all the way up to $70 (for that kind of dough, I want to sit on front man Adam Duritz’s lap while he serenades me!). I’d also take a gander at Kid Rock on Wednesday, July 27, at 7:30 p.m. (Tickets from $50 to $75! Ouch! Do you get a free line of coke with that snorted off the thigh of one of Rock’s groupies?) Beyond those two concerts, the Grandstand shows ain’t doing much for me this year.

All right, amigos, go get sweaty!

The Bluz Dogz play Frog and Peach Pub on Thursday, July 21, from 9:30 to 11:30 p.m., with lead guitarist and songwriter Dr. Hal Segal, Linda on keyboards, Bud on bass, Ken on rhythm, Jim on percussion, and Johnny on the blues harp. Dig their classic covers and groovin’ original tunes.

The recklessly disorganized, ridiculously entertaining, freewheeling and back-dealing wonder Truth About Seafood flops around like a recently landed marlin on the deck of the Paso Robles Concerts in the Park series on Friday, July 22, from 5:30 to 7:30 p.m. Get impaled on their pop-rock goodness.

On Saturday, July 23, the Cuesta Jazz Collective is the featured performer at the free Court Street Summer Jazz Series on the Court Street Terrace adjacent to Pottery Barn and Sephora from noon to 2 p.m. 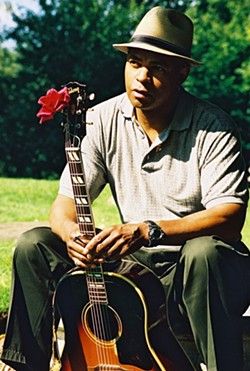 Actor, director, writer, composer, musician—and most importantly, bluesman—Guy Davis plays the next SLOfolks outdoor concert on Saturday, July 23, at 7 p.m. at Castoro Cellars (Tickets are $22; at Boo Boo’s or call 238-0725; bring an extra $15 for a catered dinner by Thomas Hill Organics; gates open at 6 p.m.). You can hear his music and listen to KCBX’s Songtown host interview him earlier in the day around 2:30 p.m. on 90.1FM. Don’t miss this virtuoso blues guitarist (slide, steel, dobro—he can play them all) and harmonica player, whose voice has been described as “like Howlin’ Wolf dipped in honey.”

Jangly, thrumping, hootenastic Santa Barbara owl-fetish quartet Howlin’ Woods returns to Frog and Peach on Saturday, July 23, at 10 p.m. They play mostly originals, but according to their bio, they’re “not ashamed to pay tribute to some of their greatest influences with cover songs ranging from Nick Drake to DJ Shadow, Grateful Dead to Talking Heads, Nina Simone to Pink Floyd, Otis Redding to Black Sabbath.”

Surf’s up on Sunday, July 24, when Merrell Fankhauser & Friends appear at the next free Arroyo Grande Rotary Bandstand concert at 1 p.m. To celebrate Arroyo Grande’s 100th birthday, the series has been marching through the decades, and this week it’s the ’60s with a man who lived through it all. Merrell and the group will perform many of his pop and surf hits from the 1960s, including his own “Wipe Out.” Though born in Louisville, Kent., he moved to California at 13, graduated from Arroyo Grande High School in 1961, and became one of the most recognized innovators of surf music and psychedelic folk rock. His material is continually mined for oldies collections, and he’s published and released more than 250 songs on more than 40 albums. Earlier this year he was nominated for a Grammy for his 1967 song “Tomorrow’s Girl,” which was featured on a new Rhino Records CD set.

The afternoon will also feature classic cars from the ’60s. 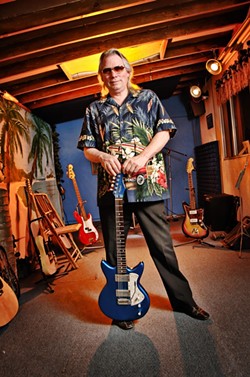 On Sunday, July 24, check out Soulamente during the free Sizzlin’ Summer Concert Series from 3 to 6 p.m. in Ramona Garden Park in Grover Beach. These concerts are free, and the farmers market is happening right next door if you need some provisions.

Experience “A Tribute to the Red Norvo Trio” on Sunday, July 24, during the next installment of the Famous Jazz Artist Series at The Hamlet. Red Norvo was one of the pioneers of the vibraphone, along with Lionel Hampton, and had an award-winning trio back in the ’40s and ’50s that featured the vibraphone with just guitar and bass. Charlie Shoemake (vibraphone), Luther Hughes (bass), and longtime Peggy Lee accompanist Barry Zweig (guitar) will recreate Norvo’s famous sound. Vocalist Sandi Shoemake will also appear. There’s a 4 p.m. show ($15), a 7:15 p.m. show ($12), or see both for $20. Call 927-0567 for reservations.

Fresno folk-pop act Brother Luke and the Comrades plays Frog and Peach on Sunday, July 24, with local opening act Gee Willikers, a married duo. The music starts at 10 p.m. Expect a banjo, a xylophone, a piano, a guitar! ∆