The work of Santa Maria photographer Mark Velasquez is naughty, but nuanced

Mark Velasquez was just 13 when he first encountered the obstacle that would make his artistic career the frustrating, delicious thing it is today: He was unabashedly fascinated by the human figure. 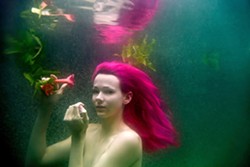 The young Velasquez had asked his mother for a book by artist Boris Vallejo, whose highly photorealistic depictions of ripplingly muscled men and buxom women—in various stages of bursting out of their minimal clothing—impressed the avid artist, who had already filled sketchbooks with his drawings of comic book heroes.

“I really wanted this book,” Velasquez remembered. “And my mom was like”—he made a disgusted face—“‘That’s kind of dirty.’ And I couldn’t convey to her, ‘I want to learn from this.’ All she saw was a 13-year-old boy wanting to see these half-naked women. And rightly so. It was the start of my whole view of the world.”

Decades later, the same conundrum follows the Santa Maria fine art photographer/fry cook. Here is a man whose provocative shots, often of beautiful, nude young women, have received criticism from both progressive, feminist types and God-fearing Midwesterners. The blue-collar workers who frequent his family’s burger joint, Tom’s Takeout, may enjoy his work on a base level—along the lines of “she has nice tits”—but the way Velasquez describes it, this reaction is hardly the goal. On the contrary, the artist, whose solo show “Keep the Faith” currently hangs at Steynberg Gallery, insists his art is more about making important statements—about sexism, fashion, censorship, religion, or art itself, to name a few examples—and that people who think his work is about ogling hot babes are utterly missing the point.

Velasquez, who holds a BFA from Cornish College in Seattle, discovered his passion for photography after exploring a long succession of other artistic interests. Drawing, painting, and etching gave way to sculpture and, eventually, performance art. A need to document his performance pieces—like the one in which Velasquez, as Jesus, dragged a 12-foot cross through downtown Seattle while his buddy, playing the part of a jeering Easter bunny, lobbed eggs at him—meant he was using the camera more and more.

The same performance-y quality, sense of humor, and wry cultural commentary lingered in his photographs, though their subjects tended more often to be slender white women than stout Mexican dudes. Images like Alice in Detox-land and Snow White and the Seven Paternity Tests referenced issues all too familiar to Velasquez’s hometown, while more political works like American Health Care (a sickly, scantily bandaged young woman, lying in the woods) and American Justice (an image of three bound, kneeling women, their heads covered, POW-style, by American flags) used supple female bodies to decry the country’s gaping oversights and atrocities.

But Velasquez has, of late, been moving away from such staged compositions, he said when we met at Steynberg. His “Keep the Faith” show contains what may be the last of them. There is Joan of Arc about to be burned at the stake, twisting mournfully against her ropes as flames begin to lick the pyre on which she stands. The same model, clothes-free, is pictured leaping into an azure sky in an image titled Ascension and emerging from the mud in a work titled Rebirth (formerly titled Dust to Dust).

There’s also a series of portraits featuring models in Dia de los Muertos-style face paintings and bearing titles such as Viejita—for an old woman, the sun waning behind her—and La Inocente, for a teenaged girl, holding flowers on a stridently sunny afternoon.

But proceed a little further, and the show also reveals more casual-looking photographs taken of Velasquez’s regulars. Most of them are friends; he rarely uses professional models. (A luscious underwater shot of the fuchsia-haired model Raven La Faye is an exception.)

While there’s ample skin to be seen, Velasquez said he’s made an effort in this case to have a show without nipples—and he’s almost succeeded.

In our conversation, he emphasized that the women he shoots are all very natural looking, in clothing of their choice (he asks them to arrive at the shoot looking the way they would for a trip to the grocery store), and that his photoshoots, these days anyway, develop very organically, with minimal staging. This is where I felt a twinge of doubt: His work sounds like it emphasizes “real beauty,” but why, I asked, are the primary subjects young, pretty, thin, white women? Don’t these images, however much they might lampoon other societal unfairnesses, also endorse a skewed, highly exclusive physical ideal?

“It’s a valid argument, and I can’t make much of an argument against that concept. Beautiful women are very nice to look at,” Velasquez began.

This was the unraveling of a very complicated answer. The photographer referenced an image titled Lust, in which a young man in an armchair—unapologetically dorky in constrictive business attire—is pictured between the red-stockinged legs of a slender woman standing in front of him. She towers, larger than life, while he appears diminutive, gaping with a mixture of desire and fear on his face. (“Who exactly is the object of lust here?” you might ask yourself. “Who has the power?” Or you might just think, “She has a great ass.”)

Velasquez said he meant the piece as a commentary on sexism, but also added, “But you can’t have that kind of photo with a woman with really big thighs and really thick legs, because it [becomes] a comment about fat people. Or if you use a Mexican woman instead of a white woman, now it’s a Mexican photo. It’s about Latina girls. But if you’re using white girls, it’s almost a blank slate. … You have to have a common language with which to speak. And so, if I’m trying to put myself in the fashion world, you have to speak their language by using pretty white women. But if you have a pretty white woman but she’s cutting herself and sad and depressed or whatever, now you’re making a comment about society. … It seems a little heavy-handed and high-minded to talk about half-naked women like this,” he admitted. “But this is genuinely how I view it.”