You can still get your Labor Day Pops fix this year when maestro Michael Nowak conducts a 60-musician-strong symphony concert on Sunday, Sept. 6, at the Alex Madonna Expo Center, with special guest Inga Swearingen.

This is the concert that almost wasn’t. By now, it’s not news that Nowak, after 31 years with the SLO Symphony, had his contract terminated. I can say without reservation that I’ve never seen a rift like this in nearly 25 years of covering the local music scene.

But Nowak is looking forward, not back, and no one—not the symphony board nor Nowak himself—seems interested in getting into the muck of this situation that confounded the public.

“The powers that be decided that they needed a new look,” Nowak said. “I feel very good about what we were able to accomplish. We were the pride of our community. The musicians and I love each other and truly enjoyed making music together. I had hoped to continue in my position for years to come.”

The real tragedy is that Nowak allowed his Hollywood career doing soundtrack and film scoring work to languish.

“My investment of time in the symphony did mean I gave up many opportunities in LA. There were really great films that I would have loved to have been a part of. There’s a whole new crowd of 30- and 40-year-old players down there who are at the top of their game. Starting over at this point in my life and career is pretty unexpected, to say the least.”

It’s not yet clear if the Hollywood work will be there for Nowak the way it was when he was working on films such as Life of Pi, August Rush, King Kong, The Kite Runner, and dozens of others.

“It is rough,” Nowak admitted. “It’s been a big change and it keeps me up at night. A lot of people have been asking me, ‘Will you be able to keep your house here? Can you stay in SLO County?’”

Since he was a contract employee with the symphony drawing a 1099 form, he receives no retirement or pension from them. Luckily, Nowak still has years of creativity left in him. The question is where can he profitably channel it?

“Since the symphony gave up its annual Pops by the Sea concert this year, [Avila Beach Golf Resort owner] Rob Rossi and I were in touch with each other about breathing new life into the event. Rob said, ‘I’ve always liked that event. If you can get an orchestra and program together, let’s make it work.’”

Nowak put the word out to symphony musicians and quickly had 60 eager players on board.

“We were off and running, selling sponsorship tables, but the situation sort of stalled and we had to look for another venue,” Nowak said, while crediting Rossi for being instrumental in driving the event forward. “We decided to create a Boston Pops style event at Madonna Expo Center, so it will have a little different look but still give people what they want, which is a Labor Day Pops concert.

“People can still bring a picnic like at Avila, and they can bring in beverages, just no alcoholic beverages, which will be available for purchase,” Nowak added. “And if people don’t want to bring a picnic, there’ll be a couple food trucks there. The folks at Madonna have been really kind and cooperative, and Clint and Connie Pierce and their staff have been excellent to work with. We intend to fill the hall with music lovers.”

Expect a program of Scott Joplin, John Williams, songs from Porgy and Bess, and much more, plus a special appearance by vocalist Inga Swearingen.

When I started covering music for New Times in 1991, one of the biggest acts in town was Intrinsic, a thrash-metal quintet with a rabid following. Long-haired, handsome, and dangerous—these rock ’n’ roll outlaws already had two releases out: their 1987 self-titled debut and their 1990 EP Distortion of Perspective. They were also hard at work recording Nails, which was to be their magnum opus.

“But while recording what would become our sophomore album, the direction of the music industry was shifting,” the band explained in recent press materials. “The industry had a ‘sound’ they were wanting and if it did not replicate Metallica’s Black Album, Pantera, or Helmet, most bands where pretty much out of luck. Having self-financed our new progressive thrash opus, we quickly found ourselves out of step with the industry. So the Nails sessions where shelved for nearly 25 years … until now.”

That’s right! After 25 years, Intrinsic—a band whose members are now scattered to the wind, all grown up with families and jobs—has released this long lost gem of ’90s metal, which they say will appeal to fans of Forbidden, Heathen, Toxik, Laaz Rockit, and Annihilator.

Of course, nothing is as easy as it should be. When the band struck a deal in 2014 with Divebomb Records to finally release Nails, the band discovered that its sole master recording DAT had degraded and was deemed unusable.

“Could this be the end before it was able to start?” the band wondered. “By a stroke of luck, the original engineer had preserved the session reels, and it was determined that a brand new mix could be created from scratch. Not being able to predict these new expenses, we turned to our longtime fans to help raise money via crowd funding, and the fans came through. The goal of the campaign was achieved in just three days. Nails was given new life.”

Divebomb Records packaged Nails as a special edition reissue with a 20-page booklet containing band-supplied archival photos and fliers, full lyrics, and an essay detailing the making of the album.

“This is a reissue for the fans, by the fans,” the band added.

Of course the real question is how does it sound? Just as crunchy, ripping, and dangerous as you’d hope, with intricate guitar work, kinetic drumming, and wailing vocals. It’s a real walk through the ’90s and a reminder why these guys were thrash-metal heroes. The musicianship is superb, the band sounds tighter than Nurse Ratchet’s white shoes, and the lyrics? Check out the first verse of the album opener “State of the Union:” “Decline and fall/ We once stood tall/ The future was at our command/ But the years of neglect erased the years of respect/ Now we bury our heads in the sand.”

Timeless! Nails is available at all the usual online locations, but I recommend the nostalgia of buying it the old fashioned way, at Boo Boo Records. Old school, just like this ripping blast-from-the-past band. Rock on!

Boo Boo Records hosts old-school LA punk heroes The Urinals in a free in-store this Thursday, Aug. 27, at 5:30 p.m. “These guys have roots to the late ’70s and have shared bills with Black Flag,” Abe Gibson of Boo Boo’s noted. “Their song ‘Ack Ack Ack Ack’ was famously covered by the Minutemen. In the last few years, Bay Area label Superior Viaduct reissued most of their back catalog, and earlier this year they released a new record.”

If you missed traveling troubadour Joshua Kloyda on Aug. 26 at the Old Cayucos Tavern, never fear. The acoustic blues singer-songwriter plays Last Stage West this Thursday, Aug. 27, from 6 to 9 p.m.

Columbian singer-songwriter Daniel Jimenez Afanador makes his SLO Town debut this Thursday, Aug. 27, at 9 p.m. at Frog and Peach. In June he released Deep Swimming in Brazil, his first full album of English-language songs. According to his bio, Afanador “listened to all kinds of music in his teen years—from Fabulosos Cadillacs and Counting Crows to Queen and Latin rock pioneers Sui Géneris. It was around that time—and after his mother passed away when he was only 16—that he realized that music had become a force of healing in his life.”

Good Medicine Presents and Numbskull Productions have another quiet week, but they will bring The T Sisters to Tooth & Nail Winery on Friday, Aug. 28, from 5 to 9 p.m. for a pop-up concert with great music, food, and wine. Siblings Erika, Rachel, and Chloe Tietjen (See why they’re just The “T” Sisters? I don’t know how to pronounce “Tietjen,” either!) were born to harmonize, which is what they do in their mostly original songs “brimming with folksy wisdom and youthful spirit,” according to their bio.

Rockers Truth About Seafood brings their award-winning sounds to Concerts in the Plaza this Friday, Aug. 28, at the SLO Mission from 5:30 to 7:30 p.m. Join 2,000 of your closest SLO Town friends!

Coalesce Bookstore presents Hawaiian multi-instrumentalist Led Kaapana in concert this Friday, Aug. 28 (7 p.m.; all ages; $25; call 772-2880). A master of strings instruments such as the slack key guitar and known for both his baritone and falsetto voices, this musical legend has been entertaining audiences for 40 years. Hawaiian slack key guitarist Fran Guidry will open and the Hoapili Pomaika’i Aloha Hula Dancers will join in. 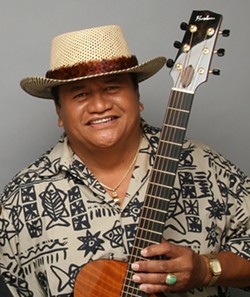 The universe’s best Gypsy, swing, tango, folk, and wild classical ensemble, Café Musique, returns for a concert at Steynberg Gallery this Friday, Aug. 28 (7:30 p.m.; all ages; $20; seating is limited so call 547-0278 and book now). A Café Musique concert is like taking a sonic and emotional tour around the world. I tend to find myself either laughing at their antics or quietly sobbing at their beautiful sound, which is more than anyone should expect from one band. Plus … accordion!

The Mother Corn Shuckers play the Sea Pines Barefoot Concerts on the green this Saturday, Aug. 29, with the Turkey Buzzards opening at 2 p.m., followed by the headliners from 3 to 6 p.m. This is a CD release party for their third album, California Grown, which they didn’t send me. I don’t feel the love.

The Cal Poly Collegians Alumni Big Band has been coming back to SLO Town for 48 years now, and they’re here again, playing a reunion concert from 7:30 to 10:30 p.m. this Saturday, Aug. 29, in the Madonna Inn Ballroom. The ensemble of about 20 musicians will re-create the swinging sounds of Count Basie, Duke Ellington, Benny Goodman, Glenn Miller, Les Brown, and other big bands of the 1940s through the ’60s—perfect for dancing or listening.

This Sunday, Aug. 30, get your hot jazz fix when the Basin Street Regulars hosts another day of Dixieland Jazz at the Pismo Vets Hall from 11 a.m. until 4:30 p.m. Pacific Swing will also perform ($5 for members or $10 for general admission).

Emily Zisman, an Oakland-based independent folk-Americana artist, may conjure memories of Joni Mitchell or Ani DiFranco. This week she rolls through the area in support of her latest album, Weeds & Wildflowers, making a stop at Sculpterra Winery on Sunday, Aug. 30, between 1 and 4 p.m. as part of the Songwriters at Play showcase; and later that night from 7 to 10 p.m. at Otter Rock Café.