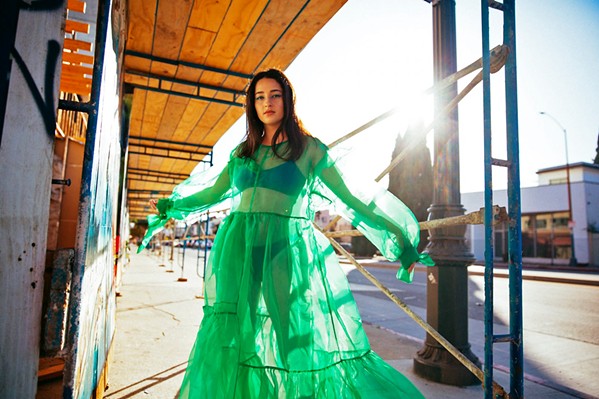 On Maeve Steele's new single "No Control," the Nashville-based singer-songwriter seems to channel the stress so many of us have been suffering through—that feeling that we can't do what we want, that we're too much in our own heads, that we want to throw up our hands and lose control.

Originally from the Bay Area, self-described "pop-noir" and "blue-velvet vocalist" has released a couple of singles—"No Control" and "Full Moon"—and as a lead-up to the release of her debut EP, Barefoot, she's traveling down the California coast on a virtual tour to benefit the fight against nationwide hunger. On Wednesday, July 29, she'll livestream a performance for the SLO Food Bank at 3 p.m.

"In lieu of ticket sales, Maeve has chosen to perform multiple livestreams to raise money for various hunger relief organizations along the California coast," her rep Anna Castle wrote in an email.

With the pandemic curtailing the livelihoods of many local residents, now more than ever the SLO Food Bank needs our help. The local nonprofit believes that everyone has a right to nutritious food. Tune in by visiting maevesteele.com.

Despite its theater being shuttered, the Clark Center continues its commitment to the local arts scene with a new series of free performances every Saturday through Sept. 26, including this Saturday, July 25, when you can see a one-hour concert by power folk duo Bear Market Riot at 6 p.m. on both the Clark Center's YouTube channel and their Facebook page.

The concert was recorded live for this year's KCBX Live Oak on the Radio virtual music festival, and it's only been seen once before. Proceeds from donations will be split between Bear Market Riot and the Clark Center.

The Holy Crow Jazz Band will livestream a concert this Sunday, July 26, at 2 p.m. as part of the Basin Street Regulars' dance concert series. Push your couch against the wall and get ready to boogie to this LA-based purveyor of old-time jazz and blues from 1900 to the 1930s. 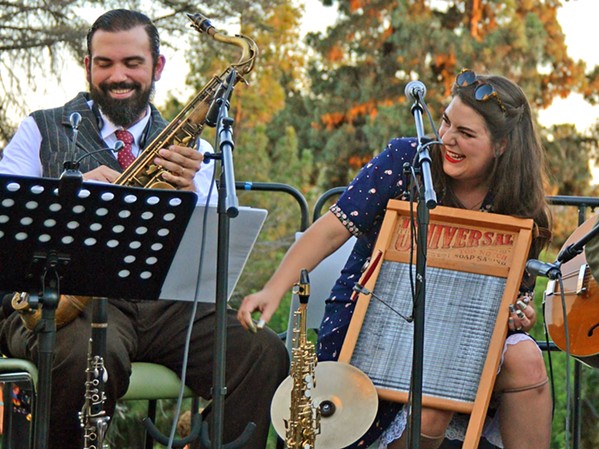 According to press materials, "The band's repertoire includes many popular and obscure songs recorded by such artists as King Oliver, Bessie Smith, Bix Beiderbecke, Bennie Moten, Jabbo Smith, and Louis Armstrong just to name a few."

Featuring Mario J. Maggio (reeds/guitar/vocals) and Jessy Carolina (vocals/washboard), "they formed the band in NYC in 2015 after having performed for five years as Jessy Carolina & The Hot Mess. In 2016, Jessy and Mario moved to the Los Angeles area and began playing with many outstanding California jazz bands and musicians such as the California Feetwarmers, Big Butter Jazz Band, Hi-Fi Honeydrops, Dave Stuckey, Marquis & The Rhythm Howlers, Becky Lynn Blanca, Andrew Barrett, among many others."

For this performance, they will be joined by two other musicians as they transport "audience members back through the times of feel-good Prohibition era speakeasies where people were untroubled by consequence, and hardships of the Depression era, when music seemed to be the only cure for sorrow and loss."

There will be a virtual tip jar at paypal.me/BasinStreetRegulars.

Virtual 'Saturday in the Park'

The city of Atascadero has moved its summer concert series out of the park and into your home to keep you safe. This Saturday, July 25, hear the Danny Grasseschi Band.

"For the safety and well-being of our community, we will launch the new concert series virtually! This event will start out with a fantastic virtual lineup that you can enjoy from your own backyard or plan a watch party with your family or friend group! The virtual concerts will be available live on KPRL AM 1230 from 6 to 7 p.m., as well as our YouTube channel and Atascadero Recreation Facebook page from 6 to 7:30 p.m."

Grasseschi's band plays a variety of blues rock classics, with music by the Allman Brothers, Stevie Ray Vaughan, The Grateful Dead, Eric Clapton, B.B. King, and more! This is a talent cast of local players, who'll put on a great show.

"Just found out from my Hollywood agent that 'LILA' from the Fapardokly album is in this new movie!" Fankhauser emailed. "Was set for October release but probably won't be out till next year due to COVID. Amazing how songs from that album keep coming back into the spotlight!"

The film in question is The Trial of the Chicago 7, which was written and directed by Aaron Sorkin (The West Wing, A Few Good Men, Molly's Game) and stars Eddie Redmayne, Alex Sharp, and Sacha Baron Cohen.

It chronicles the trial of seven people—Abbie Hoffman, Jerry Rubin, David Dellinger, Tom Hayden, Rennie Davis, John Froines, and Lee Weiner—who were charged with conspiracy, inciting to riot, and other charges related to anti-Vietnam War and counterculture protests around the 1968 Democratic National Convention.

If you have any livestream events, newly released recordings, or music news you want publicized, send details and a high-res photo to gstarkey@newtimesslo.com. Let's keep the local music scene going despite this pandemic! Also, remember that the New Times Music Awards are coming up, one way or another! Entries will be accepted beginning Thursday, July 23. Δ