Last week I told you a little about Makana, the slack key guitarist scheduled to play the Cayucos Pier Benefit Concert this Saturday, Nov. 16, but I recently learned that in addition to his performance on the pier, he’ll also play an intimate fundraiser for the pier the night before, on Friday, Nov. 15, at Cayucos’s historic Borradori Garage (455 N. Ocean Blvd.).

According to Steve Haney, owner of Good Clean Fun surf shop and organizer of the dinner concert, it’s going to be a “one-of-a-kind event, an elegant evening in an intimate setting.”

The garage can only fit about 150 people, who will be treated to a delicious meal donated by several of Cayucos’s finest restaurants. Cayucos Cellars and the Cayucos Beer Company will be providing the first two drinks (additional drinks will be $5, but hey, make sure you have a designated driver!), so it’s food, drinks, and music for $100 a person. Best of all, 100 percent of that $100 goes straight to savecayucospier.org, which last week I told you was trying to raise $100,000, but I recently learned they’ve already raised more than $350,000, and if this event sells out, they’ll add another $15,000 with your help. The county estimates the costs of repairs will be $2 million, but the group hopes to close the gap through grants.

I’ve got to say, I’m blown away by the outpouring of support for the pier and Friday’s event, which as of Tuesday was two-thirds sold. If you want to help out and see a great show, you can buy your $100 tickets at Boo Boo Records in SLO or at Good Clean Fun in Cayucos.

Apparently, this is the third time Makana has played the Borradori Garage.

“He’s not the usual Hawaii slack key guitarist that makes you think hula while simultaneously putting you to sleep,” joked Haney. “He’s really a contemporary folk singer, and his guitar playing will blow you away. He also plays piano. This guy’s amazing, He’s played all over the world, even the White House, but he loves Cayucos and the Borradori Garage.”

Born and raised in Hawaii, Makana (née Matthew Swalinkavich) is a name that means “a gift freely given.” He began singing at age 7 and started playing ukulele at 9. By age 11, he began learning the time-honored guitar style known as slack key, and by 14 he was playing professionally.

If you saw the George Clooney film The Descendants, you’ve already heard Makana, who provided a track for the film.

“This guy is captivating,” added Haney. “He’s a storyteller and an amazing performer. This is going to be a great night.”

And don’t forget to head to the pier on Saturday, Nov. 16 for the outdoor Cayucos Pier Benefit Concert, which is free and will be fun for the whole family. All the Front Street businesses and vendors will be donating their proceeds to the pier fund, and SLO Brew and Liberty School Winery—who paid for all the upfront costs of staging the event—will donate 100 percent of their profits as well.

The event starts at 11 a.m. and will feature performances by Matt Costa, Cayucas, Makana, Próxima Parada, the Julian Temple Band, Joe Koenig, The Monroe, The Cayucos Elementary School Steel Drum Band, and Taiko. It will wrap up by 4 p.m. Bring chairs or a blanket, find a spot on the sand, and dig the Cayucos beach vibe.

And since the Cayucos concert is put on by SLO Brew, I might as well fill you in on what they’ve got cooked up at the club this week.

On Thursday, Nov. 14, check out Larry and His Flask with opening act The Mutineers (8 p.m.; all ages; $12 presale or $13 at the door). Larry and His Flask is an Oregon-based sextet of musical anthropologists that started as a punk act but evolved into, as their bio claims, “a blurry blend of lightning fast string-band picking, gorgeous nods to old-school country, and sublime multi-part harmonies, all presented through a prism of punk chaos.” They’ve got horns and everything, and if you like Devil Makes Three … well, you’ll dig these guys! 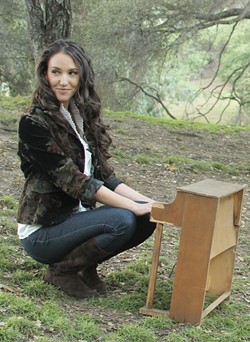 You’ll also dig Band of Heathens, who play Friday, Nov. 15 (7:30 p.m.; 21-and-older; $12 presale or $15 at the door). The Austin-based Americana band tours relentlessly and is currently on the road in support of Sunday Morning Record, an 11-track collection about which founding guitarist Gordy Quist said in press materials, “Sunday Morning Record was born in the midst of change. Life changes, lineup changes, geographic changes. It was a rollercoaster of a year, but that change served the album well and became our muse.” This is a great live band! Don’t miss it (unless you’re going to Makana and donating $100 to the pier … then you’re forgiven). By the way, Joe Fletcher opens.

This Thursday, Nov 14, American Dirt, Dead Volts, and Pete Stein are playing at Dunbar Brewing in Santa Margarita at 8 p.m. “Pete Stein is the singer-songwriter behind the acclaimed alt-country band Truckstop Coffee, now out on a solo tour supporting his new record Sleeping Giant,” explained Patrick Hayes, concert organizer and front man for Dead Volts. “Dunbar is just about the perfect place to see some twangy rock and have some of their expertly crafted beers.” On Friday, Nov 15, Dead Volts and Pete Stein will also be at the Libertine Pub in Morro Bay. “It’s one of those rare venues that you can actually have a singer-songwriter like Pete and then a raucous rock’n’roll band like the Dead Volts on the same bill and it works well,” added Hayes. “As an added bonus, the Dead Volts will be joined on guitar by Keith Kurzcewski of the Booker Tease. We’ve been longtime fans of Keith’s and are really excited to play a show with him.”

“We’re 21st century bards who play over 30 world instruments and have a great story to tell,” say Four Shillings Short, the Celtic-folk-world music husband-and-wife duo of Aodh Og O’Tuama from Cork, Ireland, and Christy Martin from California. This touring favorite has played our area plenty of times, and this Saturday, Nov. 16, they’ll appear at the Portola Inn (6640 Portola Rd., Atascadero) in a benefit concert for the Cuesta College North County Chorus. Reserve tickets ($20) are available through Cassandra Tarantino (ctaranti@cuesta.edu or 439-0547). Wine and hors d’oeuvres will be served at 6:30 p.m., and the concert begins at 7. All proceeds support Cuesta College North County Chorus 2014 Freedom Tour: “Lifting our Voices in Tribute to Veterans.”

Frog and Peach has The Podunk Poets this Saturday, Nov. 16 (8 p.m.). Formed in 2011, this is a classic country-inspired duet-fronted band from Los Angeles, featuring Kelly Kidd and Cindy-Lou, who are inspired by the sounds of Loretta Lynn and Conway Twitty.
Paso Robles Brewery will host a performance by Los Angeles singer-songwriter Shani Rose this Sunday, Nov. 17 (4 p.m.). The graduate of USC’s Thornton School of Music in jazz piano, songwriting, and composing has a voice that’s been compared to Adele, Sara Barreilles, Regina Spektor, and Norah Jones. She also writes compelling, thoughtful songs that have a way of sticking around in your head.

Have you heard of singing for your supper? Well, local jazz and folk chanteuse Inga Swearingen is going to be singing for their supper at the 5th Annual Music for the Soul concert this Sunday, Nov. 17 at Paso’s Studios on the Park (wine and hors d’oeuvres at 5 p.m.; concert from 6 to 7). The benefit concert hosted by St. James Church will donate a portion of the proceeds to the Food Bank Coalition of San Luis Obispo and Loaves & Fishes of Paso Robles—two organizations that feed the hungry in our community. Limited tickets are available: $125 per person by Visa or MasterCard by calling 238-0819 or 237-4040.

Reno-based soul-funk power-trio the Mark Sexton Band plays on Tuesday, Nov. 19 at Frog and Peach. Sexton, along with bassist Alex Korostinsky and drummer Daniel Weiss, will channel some Stevie Wonder-style sounds for your dancing pleasure. Prepare to get down with your bad self.

Laura Leighe—a pop duo out of Oklahoma City—plays two shows this week, first at the Frog and Peach on Wednesday, Nov. 20 and then at the Paso Brewing Co. on next Friday, Nov. 22. The new wave sound features Laura Leighe Stockton’s sweet and soulful vocals and keyboard and drummer Zach Dumbleton’s retro-punk style. They sound cute as hell.