Make a day of it at El Chorro Regional Park with the California Honeydrops, Proxima Parada, Nicki Bluhm, and Wordsauce

Is it just me, or do we need a Kumbaya moment?

With the Gov. Gavin Newsom recall election looming, the 20th anniversary of the Sept. 11 attacks, and COVID-19 continuing to drive a wedge between the angry as it spreads ever further through the population, a little outdoor gathering is just what we need to feel the love and (hopefully) not spread the virus.

Numbskull and Good Medicine Presents has just the ticket: the SLO Gathering at El Chorro Regional Park on Saturday, Sept. 11, where you can connect with the community in a COVID-19-safe outdoor space and plenty of California music. The California Honeydrops, Próxima Parada, Nicki Bluhm, and Wordsauce will play the daylong, family-friendly event (noon; all ages; $35 at eventbrite.com; kids 12 and under free), which will have beer, wine, and food available for purchase.

The Honeydrops have come a long way since guitarist and trumpeter Lech Wierzynski and drummer Ben Malament started busking in an Oakland subway station, but the band has stayed true to that organic, street-level feel. With the addition of Jonny Bones on tenor sax and clarinet, Lorenzo Loera on keyboards, and Beau Bradbury on bass, they've built a powerful full-band sound to support Wierzynski's vocals. For more than a decade, the Honeydrops have drawn on Bay Area R&B, funk, Southern soul, Delta blues, and New Orleans second-line to influence their infectious, vibrant energy.

Their concerts are like full-on dance parties, and the band likes to jam and interact with the crowd. They leave the stage and get down on the dance floor to boogie with you. The California Honeydrops shares one vision and purpose: to make the audience dance and sing.

"The whole point is to erase the boundaries between the crowd and us," Wierzynski says in press materials. "We don't make set-lists. We want requests. We want crowd involvement, to make people become a part of the whole thing by dancing along, singing, picking the songs, and generally coming out of their shells."

And Próxima Parada is no slouch either when it comes to getting the audience engaged, dancing, and singing. The SLOcal blue-eyed soul band—whose music promotes introspection, vulnerability, human connection, and a hell of a lot of joy—released a new album this year, Kind Reminder, and is getting set to head out on national tour—again!

Starting as a group of college friends wanting to extend their dynamic to their community in San Luis Obispo, they never dreamed that their passion would reach a global audience, that they'd perform at beautiful historic venues and music festivals, that their music would soothe and inspire people around the world. But it does and you can catch them while they're home!

California native Nicki Bluhm currently lives in Nashville, and she's heading into her second decade of releasing albums. Bluhm stepped out on her own in 2018, with the release of To Rise You Gotta Fall, a collection of songs exploring old endings and new beginnings. Her "vintage-tinged rocking country soul" (according to the Chicago Tribune) can set your mind at ease with completely new music that sounds familiar. She's excited to return to the road playing live shows as a solo artist after years of touring with her band, The Gramblers.

She puts on a great show!

So does seven-piece live hip-hop/funk band Wordsauce. Drummer Bill Gerhardt and bassist Wesley Price, guitarists Kevin Strong and Shawn Warnke, saxophonist Samuel Franklin, turntablist/producer Eric Mattson, and emcee/vocalist/producer Rick "Risko" Loughman began developing their own style of live hip-hop with funk instrumentation, and rhythmic, catchy vocals. The SLO-based band's new album Juice, shows that their music is constantly evolving and that they're determined to take their live show all over the world—including, of course, a SLO Gathering at El Chorro.

Benatar's knock-your-socks off vocals pair nicely with Giraldo's artistry as a guitarist, producer, and songwriter, forging a unique sound that created some of rock's most memorable hits—"We Belong," "Love Is A Battlefield," "Promises In The Dark," and "Heartbreaker." They have sold more than 30 million records and won four consecutive Grammy's.

Ziggy Marley plays tribute to his father at Vina Robles on Saturday, Sept. 11 (8 p.m.; all ages; $56 to $86 at vinaroblesamphitheatre.com). The eight-time Grammy winner, Emmy winner, humanitarian, singer-songwriter, and producer has released 15 albums to critical acclaim. His early immersion in music came at 10 years old, when he sat in on recording sessions with his father, Bob Marley. Now, with his own label, Tuff Gong Worldwide, and publishing company, Ishti Music, Ziggy has control of his master recordings and publishing. In May 2018, he released his most recent album, Rebellion Rises.

The seven-piece Con Brio from San Francisco comes at you with energetic soul, psych rock, and R&B grooves at The Siren on Thursday, Sept. 9 (7 p.m.; 21-and-older; $17 at eventbrite.com or $20 at the door), with Silk Ocean opening. Named for an Italian direction meaning "with spirit," Con Brio will convert anyone who sees frontman Ziek McCarter, who brings "the dance moves, splits and all, of James Brown" (KQED), and the tight, veteran band that "comes across like a party punk version of Sly and the Family Stone" (Consequence of Sound). 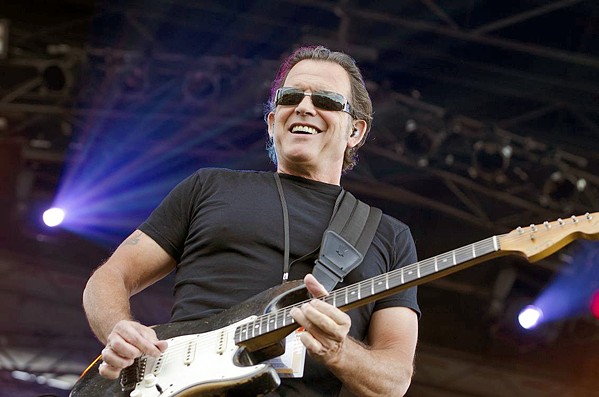 Tommy Castro & The Painkillers are at the Fremont Theater on Friday, Sept. 10, with special guest Atomic 44 (8 p.m.; all ages). Castro first picked up a guitar at the age of 10 and fell under the spell of Eric Clapton, Elvin Bishop, Taj Majal, Mike Bloomfield, and other blues rockers. Since then, he's honed his blues-rock and soul music sound and won six Blues Music Awards.

His new album, A Bluesman Came to Town, comes out on Sept. 17. Castro calls it a record of songs that tell a story about a young man whose life was never the same after a guitar-playing bluesman comes to his small town.

"It's based on a classic hero's journey—the odyssey of a musician's life," he said in press materials. "In telling the story, I've tried to touch on the many different styles of music that I love."

The Mo Betta Jazz Quartet presents A Night in Paris at The Penny in SLO on Tuesday, Sept. 14 (7 p.m.; $35 suggested ticket donation). The soiree includes food and beverage. To reserve your spot, email mobettajazzmusic@gmail.com by Sept. 13. Δ

Editor Camillia Lanham is filling in for Glen Starkey this week while he vacations in paradise. Send complaints, notes, and music news to gstarkey@newtimesslo.com.