It’s a hot, near summer’s day on May 11 in Mission Plaza when my girlfriend and myself make our way from booth to booth in the first ever San Luis Obispo Mini Maker Faire.

Off the bat, I’m struck by the sheer amount of energy that the smaller versions of our species have in 80-plus degree heat and sweltering humidity.

A toddler, looking like he’d just completed the Iron Man, bumps into my calves like a drunken sailor looking for the next watering hole. Before he even has time to fix the Velcro on his Batman sneakers, he spots the robot-building station and bolts for it in a way that only leash-free toddlers can.

“I’m melting,” I say to my girlfriend Aileen just as a man in a full, vintage suit and a monocle struts by, with a look on his face that says, “Lady, don’t even … .”

The Mini Maker Faire is an offshoot of the original Faire held each year in San Mateo, and according to the organizer’s webpage, it’s a “place to share and show off what we are learning. It’s a place to celebrate the fun and freedom of being an amateur.” 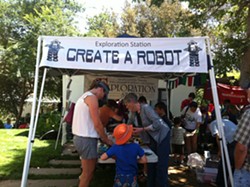 True to its description, the faire seems to be run mostly by 20-something engineering students and industrious 8-year-olds. The excitement for what they do is palpable, and the kids are just eating this place up.

The parents seem to love the Mini Maker Faire, too. I see a dad serenading his pre-teen kids with a sweet, sweet banjo tune a-la Deliverance. The kids, however, seem more interested in the Ernie Ball Guitars booth and finding a way to pretend this man didn’t contribute to their genetic profile.

Aileen and I stop by a booth with robot cars that have dusters attached to the ends of bumpers.

“Maybe this will get Aileen to dust her apartment once in a while,” I think to myself, but don’t say out loud, because I’m pretty sure there aren’t any robots that can set broken bones at this thing.

We mosey along and walk by a booth featuring an old piano that’s been gutted and fitted with an iMac computer. A little girl sits at the bench and orchestrates her own music, which is just about the cutest thing ever (and I’ve been to that cat section of YouTube).

There are so many cool booths with genius 7-year-olds here that I’m considering repeating the third grade if this is the kind of stuff they teach now.

There’s a 3D printing station at the SLO Makerspace booth where two dudes are churning out 3D plastic figurines of all sorts of things. I want to ask if they can immortalize my cat in 3D print, but they seem busy fielding questions from an older dude who seems way more excited about it than the 10 kids at the booth.

Aileen and I are starting to feel the effects of the heat and looking around, and I begin to realize that children aren’t immune to heat; they’re just evil little geniuses who take advantage of their height and use adults as sunshields.

Suddenly, my beer radar goes off and I can sense that there’s an alcohol-related booth somewhere in the plaza. I follow my ninth sense (the extras are devoted to finding Costco samples and sensing when my cat is sad) to an arcade game situated in the Far East corner of the plaza. To my surprise, I find that the stand-up arcade game is actually called ARKEG and is designed by two entrepreneurs, Brant Myers and Dan Grimm, to distribute thermoelectrically refrigerated drafts while you play video games. The unit is dry, because there are kids playing it (something my free sampling sense should have picked up on), but the fact that two geniuses are devoting their powers to such good works is enough to satiate me.

But the call for beer and gravy fries becomes too great for Aileen and me, so we head over to SLO Pasty Co. to escape the heat and celebrate our Irish heritage.

I, like the many folks of all ages I saw in attendance, had a great time at the Mini Makers Faire, and I highly recommend that they keep doing this thing and keep kids off the streets with robots and banjos. For more info on the Mini Maker Faire, visit minimakerfaire.com. ∆

Calendar Editor Maeva Considine can barely make toast. But she wants you to make comments and send them to mconsidine@newtimesslo.com.