Pressing Matters is on display at the San Luis Obispo Museum of Art through Oct. 14. Visit sloma.org for more information.

For Juan Fuentes, art and politics have always been intrinsically linked. Across more than 30 years of working as a printmaker, Fuentes has crafted posters for South African President and revolutionary Nelson Mandela as well as the women's rights movements.

Fuentes grew up in the farm labor camps of Monterey County, picking fruits and vegetables alongside his family. His work takes inspiration from the social movements of the 1960s and '70s.

"I grew up with the Chicano art movement and those posters," the San Francisco State University alumnus said.

So Fuentes felt in his element when he juried the art pieces for the Pressing Matters show at the San Luis Obispo Museum of Art (SLOMA), with themes ranging from migration to pollution.

"It really kind of hits home for me," Fuentes said.

The show is currently on display the Central Coast Printmakers' annual exhibition, and it features the works of 51 artists from across the country. The association picked Fuentes as the show juror after several members took workshops with him in the Bay Area.

"We're always looking for content experts," SLOMA curator Ruta Saliklis said. "Juan is so involved with cultural and political matters and being a poster maker, he was a perfect fit."

Fuentes looked for a similar level of detail when selecting which piece to give the juror's award , ultimately settling on Das Narrenschiff, an etching by San Francisco artist David Avery.

"I was kind of intrigued by the detail in the work and the technical mastery," Fuentes said. "He seems to be telling a story in each of the pieces."

Das Narrenschiff translates to "Ship of Fools" in English. A 1490 painting by Hieronymous Bosch, Ship of Fools, served as the inspiration behind Avery's piece, according to his online statement.

Saliklis noted that the title also alludes to Anne Porter's 1962 book of the same name, which served as an allegory tracing the rise of Nazism.

With the current rise of the "alt-right" and marches supporting white supremacy, Saliklis said the message behind Avery's and Porter's works are still current. 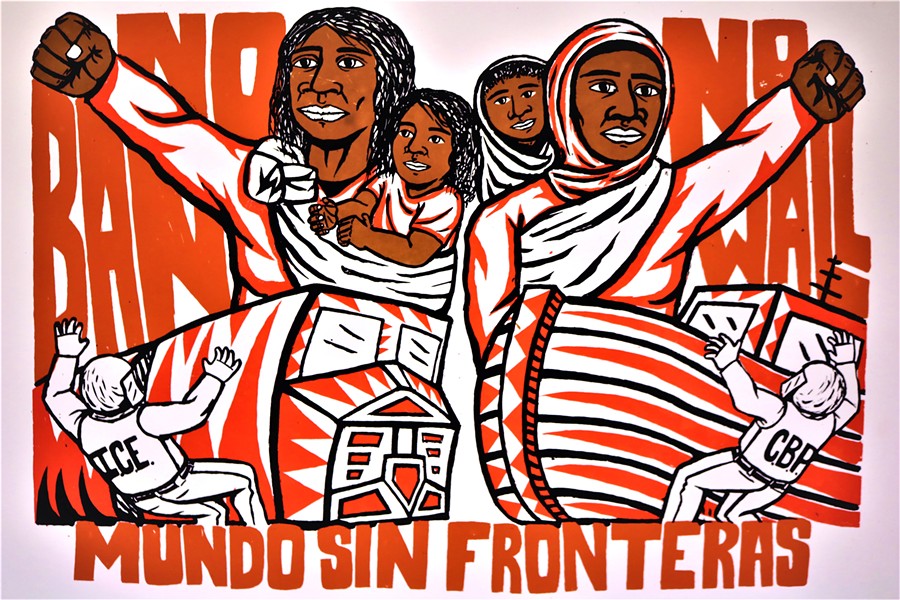 "He is just amazing technically," Saliklis said of Avery. "His prints look like something from the 16th century. It has these tiny, tiny, details. It's timely, really something also happening now that also feels like a ship of fools. It's just as relevant as when the book came out."

The SLOMA show also features a chalkboard where anyone can respond to the question, "What's your pressing matter?" which plays on the name of the show.

"We've all got our pressing matters," Saliklis said. "And there's so much happening in the world that it's nice to see things through the eyes of the artists. But we're also trying to get feedback from viewers."

Answers range from Deferred Action for Childhood Arrivals funding, to the drought, to even a new art museum.

"It's kind of what's right in front of you that's your pressing matter," Saliklis said. Δ

Arts Writer Ryah Cooley is working on her hand lettering skills at rcooley@newtimesslo.com.