Every morning, retired Los Angeles Police officer Jerry Mag would wake up and walk from his home down to the pier and into the Cayucos Veterans Hall. He would start his day by grabbing the ice machine’s scoop and chipping away at the ice that was stuck in the machine to get it going again. That’s how Breck Smith, events coordinator for the Cayucos Lions Club and Veterans Hall, remembers the former Lions Club member who died last year.

“So now when I come down, I think to myself, ‘This is for you Jerry,’ and I get the machine going,’” Smith said. 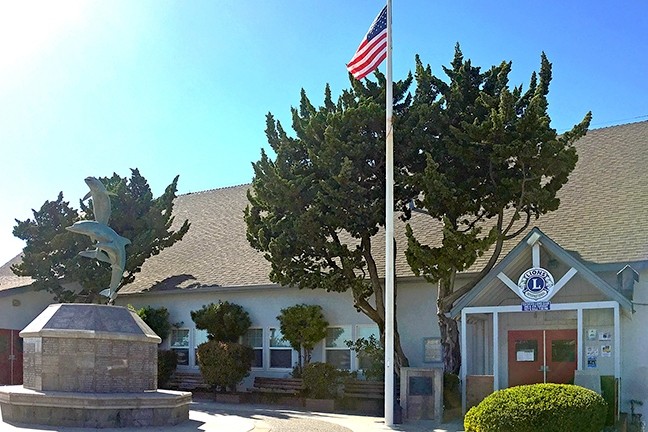 He said that there are many Lions who have come and gone in the club, and they’re a great group of friends who work to better their community.

This chapter of the Lions Club operates the veterans hall by booking events such as weddings, birthdays, festivals, and memorials. The hall has a big significance for the club, as it was the meeting place for the members, a source of revenue, and a community outlet.

The San Luis Obispo County-owned building was condemned in May 2016 after county inspectors found major issues with its foundation and existing framing. When the hall closed, many weddings canceled their booking, leaving the club with a $28,000 loss in revenue last year.

Smith said the closure of the building presented some challenges for the Lions Club, but those are nothing they can’t handle. His role as coordinator was taken to another level when the club started operating out of a tent.

That temporary tent, which the county provided for the club, is currently used to host events like weddings and the Cayucos Sea Glass Festival. The tattered white canvas structure sits right behind the hall, and its fabric walls sway with the wind. Smith spoke about finding white guerilla tape that he uses to discreetly mask the tears that are wearing into it. One club member has gone so far as to put up a rain gutter along the side of the tent facing the ocean, to keep the rain out.

During the March 21 SLO County Board of Supervisors meeting, more than a dozen people spoke on behalf of the veterans hall, calling for supervisors to approve the funding for a rehabilitation project.

Among the public commenters was a representative for the Cayucos Art Association, a group that had used the hall to display its members’ art.

She said that with the sudden closure of the building, the association was given two days to remove everything from the gallery.

“We miss greeting visitors and acting as the unofficial ambassadors to Cayucos and SLO, since we were often their first point of contact,” Everett said. “We loved answering their questions.”

The Board of Supervisors unanimously voted to approve the $236,600 project to renovate the hall. Taking those first steps, the board also approved $96,160 that will go toward a consultant services agreement with Studio Design Group Architects in San Luis Obispo. The project is expected to be finished and ready for use in 2020.

“Those are just time frames that we mash our teeth over, but they’re inevitable and understandable,” Smith said.

He said he is looking forward to the refurbished building, but, for now, he’ll continue to mend the tent alongside his fellow Lions.

• Cuesta College’s current Rodeo Club Men’s Team was recently ranked No. 1 in the nation after it was established three years ago. The team beat both community colleges and four-year university clubs through the National Intercollegiate Rodeo Association.