When Aric Sweeny decided to join the student newspaper at SLO High School his sophomore year, he wasn't the kind of person who was eager to walk up to a total stranger and ask them questions.

"I was not really outspoken," Sweeny, an 18-year-old who just graduated, said. "I would say that, socially, I was kind of anxious ... I wanted to change that about myself." 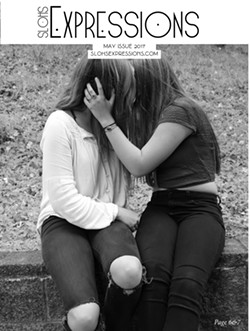 As a student journalist for Expressions, SLO High School's print and online news outlet, that's just what he'd do. The class, offered as an elective, not only teaches students the nuts and bolts of reporting and writing news, but requires students to get out and talk to their peers, teachers, and administrators, a tall order for young people who might be a little shy.

"A big part of the first year was being assigned an article and having to interview people I'd never met before," Sweeny said. "To a socially anxious 15-year-old, that can be a scary thing."

But Sweeny stuck around, staying with the paper though the rest of his high school career, and becoming one of Expressions' editors.

SLO High School English teacher Scott Nairne teaches the elective and acts as Expressions' faculty advisor. Nairne said that he lets the students have complete autonomy with the topics they report and write about, as long as they are following all the established legal and ethical rules of journalism he's taught them in class. That autonomy allows the students who work on the website and paper to take on issues that matter to the estimated 1,400 students who attended the school.

"They want to talk about things that are happening on campus, and all the available views on those topics," Nairne said. "It is student run, and I want to honor that."

Those students don't shy away from controversial topics either. This year, Expressions was at the center of a media firestorm after it published a letter to the editor by then-teacher Michael Stack, who objected to a recent issue focusing on LGBTQ students. Stack cited biblical scripture that stated people who committed homosexual acts "deserved to die," and the publication of the letter sparked online outrage, protest rallies, and landed Expressions in nationally recognized media outlets like The Los Angeles Times, Teen Vogue and The Huffington Post.

Far from being cowed by the national attention and even some criticism that the letter shouldn't have been published, Nairne said many of the students at Expressions embraced the situation.

"The kids loved everything about that," he said. "They knew their press law and they knew they were in the right. They liked having that responsibility."

Sweeny was one of those students. As someone who said he "100 percent" opposed censorship, Sweeny said there was no question that the letter should have run.

'It was a really interesting two weeks. I am really glad that we did run [the letter] because we were able to bring an important topic to the forefront.' tweet this

"It was a really interesting two weeks. I am really glad that we did run [the letter] because we were able to bring an important topic to the forefront," Sweeny said. "It's cool to realize that in one day that anything you publish can be seen and read by everyone and recognized."

While many people might have memories of their own high school publications writing stories on more banal topics like the latest addition to the cafeteria's menu, student journalists today are taking on a variety of hard-hitting and important issues according to Laura Widmer, executive director for the National Scholastic Press Association (NSPA), a nonprofit organization that provides journalism education, support, training programs, and other resources to student news publications.

"You see them take on some great topics. Transgender issues. Racism. You see some heavy-hitting articles that are done well by these student journalists," Widmer said.

Currently, the NSPA has more than 1,600 member publications. Widmer said the rise of the internet and online media has made it easier than ever for high schools, junior high schools, and even elementary schools to start their own news outlets for next to no cost, which she sees as a positive not just for the students and their peers, but to the wider communities where they attend school as well.

"It helps to personalize and give a voice to those people who may otherwise feel voiceless," she said.

Those student reporters and editors willing to tackle tough subjects could be the next generation of professional journalists. Despite an ever-polarizing view of the mainstream media and an American public suspicious of "fake news," Sweeny expressed optimism for the future. The Expressions alumnus told New Times that he plans to double major in economics and journalism at San Jose State University.

"Reporting is great, but I also love creating content and being behind the scenes and seeing how things run," he said. "Journalism is definitely in my future." Δ