Making sense of the censure 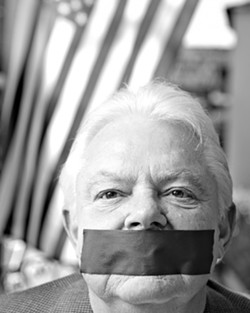 # At issue were e-mails he sent to city staffers questioning why, since the powerful Coastal Commission has called it improper, the city was still planning to install kiosks for pay parking in the city.

For his actions, they took away Rabenaldt's publicly funded laptop and credit card and told him he can't attend any conferences until his term ends in November.

Given all the fuss, we at New Times wondered what Rabenaldt had said in those e-mails, so we asked for copies and are publishing excerpts verbatim. We've cleaned up some of the punctuation to make these exchanges more understandable (it didn't help much), but we left in most of the exclamation marks and capital letters, because those are so fun.

Here are some excerpts:

Jan. 30, regarding a city job posting for the new position of Parking Enforcement Officer:

I believe that we were deceived when the majority of the city council approved the position of a parking supervisor. Many told the council and you that there would be a layer of bureaucracy created with this position. We have no meters in place, nor is there a plan for collection or enforcement that I am aware of, I suppose this is what you are trying to create, but what is this supervisor doing in his spare time? This is an insult to our community and I am particularly disappointed in this posting. Respectfully

Today most or all of you received a flurry of emails about where we are with the Coastal Commission as it relates to implementation of our paid parking program. The following are the facts to date

The Coastal Commission as to date have not taken any action relating to enforcement on the issue.

City staff is implementing the City Council number one priority that is to implement paid parking in the downtown.

Attached are copies of the letter I sent to the Coastal Commission and memo I sent to Council on our position with the Commission.

After my personal conversations with members of the Coastal Commission today, you either have more information than is in the attached letters or you have your head in the sand. Why in the world would you want to have an agency so upset with us? ...

Believe me, this is going to be a much bigger issue in the long run. An example is going to be made of Pismo at the state level and all we will have to rest upon is our arrogance. Good thing we are considering the sales tax so we can pay off Lucia Mar and the Coastal Commission. How dare you all do this behind your desks and not keep council (me) or the public in the loop. I'm pretty disgusted! Bill

p.s. I sent an email to the mayor and all she had to say was that staff told her they were right. What's up with that. I think we should just disband the council in November. You don't need us!

(For his part, Rabenaldt said it was the phrase "head in the sand" that got the staffers and other council members mad.)

The way you are dealing with this is unacceptable! Mass emails are a degrading and undignified manner in which to deal with any disagreement or discipline. If you have an issue with a subordinate (or anyone else), the only professional, reasonable way to deal with it is behind closed doors. For God's sake, grant these people the dignity that we all deserve as human beings and fellow citizens

You've been my friend and supporter for many years and I do appreciate that, and that makes it that much harder for me to say these things to you, but too often your behavior is a huge detriment to this city.

And (the timing from here gets a little unclear, as the exchanges digress into a confusing mash of replies-to-all)

That email went out on "Reply to all," the same who received your original email. Not so fun when you're on the other end, is it?

And if you're thinking that your much appreciated support and friendship through the years has purchased you carte blanche with me, think again. If you're thinking you can continue to act abusive and absurd with members of staff, council members, chamber members, fellow citizens, et. al., and that I am just going to blindly support you, think again.

I no longer want your support because I'm afraid people will think I have rolled over like you. You don't seem to understand that I have nothing against staff other than the direction they are moving. Kevin, Randy and the rest are first class and I have made that statement ad council and in letters. That is not the point. I could sit and have a conversation at any time as long as they understand my opposition to what they are trying to accomplish.

And later, talking about giving public funds to the local chamber of commerce

Did I make unflattering comments to the chamber director, yes. I wish I had that whole day to live over again because I am so ashamed of myself. I apologized to her and the then president at the sewer plant. And when one of their members gets up at council and shows articles about my wife and family does not endear me to them. I am sorry, but if you and others still hold a grudge, I can no longer do anything about it. Again, I am sorry and I apologize sincerely. When you talk about fellow citizens, I have never called anyone a co_ksu__er and only try to express my opinions. You seem to think I should just go along with whatever is going on and I WILL NOT!

You see, you are not a fighter any more and you were so good. What happened. Like council, you just accept what you're told and write letters to people like me that question authority. So be it.

I have always had the utmost respect for the job you and your staff are performing on behalf of our beautiful city. I am appalled, therefore, that a member of the City Council has chosen to ridicule the efforts of Randy Bloom in his dealings with the Coastal Commission. Randy is a first class professional and I am pleased to work with him and his staff. In addition, the actions by the councilmember may have violated the city's code of conduct (again.)

That's pretty much it.

Rabenaldt said he's gotten inundated with calls of support and people wanting to subscribe to his newsletter since the censure. As for the penalties, he said he hadn't used the credit card in a year and no longer uses the laptop, since it's five years old.

He said he's also considering a run for mayor.

Comments on this confusing exchange can be sent to Managing Editor Patrick Howe at phowe@newtimesslo.com.