Making sense of the mess at the DSS

Should the county be held solely responsible for a costly child welfare mishap? Director of Social Services Lee Collins doesnâ€™t think so.

The SLO County Administrative Office last week confirmed a million-dollar out-of-court settlement concluding a lawsuit involving three children, siblings who allegedly endured physical, emotional, and at times sexual abuse at the hands of several of the foster families where they were placed over a three-and-a-half-year period. 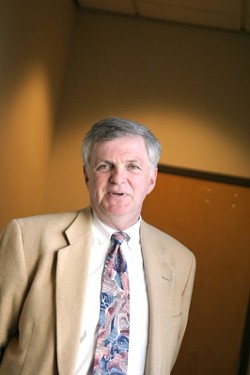 #
Between September 1999 and August 2003, the children, all under the age of six, were shuffled through 19 different homes, including one with a couple with a known history of child abuse. According to strict state guidelines, that couple never should have been licensed for foster care. At their home, attorneys allege, the children suffered the most offensive abuses. The State of California has agreed to pay $225,000 toward the settlement from its Foster Family Insurance Fund, but the bulk of the money â€” to the tune of $825,00 â€” will be shelled out by the county. County Counsel spent an additional $170,000 in public funds to settle the case, bringing the countyâ€™s bill to nearly one million dollars.

Lee Collins, director of Social Services for the county, agrees with the key allegations of the lawsuit â€” mainly, that the county failed to protect the children from the abuses they faced. He further admits that the number of homes the children were moved in and out of was unusually high, though he adds that such a problem cannot always be avoided, especially with multi-children placements.

As for the allegations of abuse, he says that only the last home was proven to have been an actual threat to the children, and then only after an investigation months after they had been removed. He cautions that the settlement is not the same as an admission of guilt, and insists that the county shouldnâ€™t be expected to bear the brunt of the blame. Indeed, he believes his department did everything in its power to help the children, including taking measures to ensure that such a problem would never occur again.

Within the Department of Social Services, a number of key staff contributors to the situation were fired, disciplined, or asked to leave, including the social worker who apparently issued the license to the couple in the first place. In her declaration to the courts, this caseworker alleges that a series of departmental defects led to the error for which she was held solely responsible. She adds that at one point the county almost lost its licensing privileges because of â€œinherent deficiencies within the department.â€?

Collins contends that several measures were taken to change fundamental proceedings within the department â€” all of this long before the civil case was ever filed. At no point does Collins suggest that he or Debbie Jeter, director of child welfare services for the DSS, were in any way directly responsible for the incident, though he does name other, outside factors that he says contributed to the childrensâ€™ suffering.

Heâ€™s genuinely frustrated that that no light has been shed on the role of such outside factors in the debacle. In a recent e-mail from Collins circulated throughout the DSS (and provided to New Times by an unnamed source), he specifically targets the childrenâ€™s court-appointed attorney and several Court Appointed Special Advocates, or CASA, volunteers. He contends that the volunteers and the attorney worked in concert with several county social workers â€œto thwart the efforts of the county to change [the childrenâ€™s] placement, delaying the move.â€?
Collins recently told New Times that his department tried to pull the kids from the offending home as soon as child abuse was suspected.

He says he was given an anonymous tip about the family in question, which led to an immediate investigation into their abuse history. But â€œpeople got in the way,â€? he says, and they used their influence with the courts to stall the kidsâ€™ removal. He found himself in a fighting match against the state to revoke the familyâ€™s license. The court process was â€œstrangledâ€? by â€œoverzealous judges and lawyers,â€? he complains, when everybody should have been caring for the children.

As a result, the kids very likely endured what he calls further â€œcruel, sadistic, and wholly bizarreâ€? treatment from their foster parents. As to why anyone, especially child advocates, would go out of their way keep the kids in such horrendous circumstances, Collins canâ€™t offer an explanation. He only notes that an independent investigator hired by the county concluded that these people played a part in the problem. Still, they were never involved in the lawsuit.

Neither the attorney nor several members of CASA who spoke with New Times wish to be identified, citing juvenile confidentiality laws that prevent them from speaking in detail about this case.

The attorney, however, expresses frustration at Collinsâ€™ allegations, adding, â€œFor him to point the finger at us, to say we did anything, thatâ€™s wrong and entirely unfair because he knows I canâ€™t say anything about this.â€? Teresa Tardiss, executive director of CASA, sadly notes that disagreements between â€œwatchdog groupsâ€? and the county were inevitable, and that Collinsâ€™ beef was just another example of that problem.

Several times during his interview with New Times, CollinsÂ  pointed out that the attorneys who filed the case against the county earned a huge profit for taking on the case â€” about $350,000, in essence suggesting that the suit was not motivated by compassion for the children, but by the opportunity to make a quick dollar. In response, Scott Radovich, one of the attorneys in question, has issued this statement:

â€œOnce again, Mr. Collins and the Department of Social Services have ignored their role in the gross mishandling of the three young foster children who were placed in 19 different foster homes over a period of three years. Some indescribably horrible things happened to these children, and all Mr. Collins is concerned with is who else he can blame and the amount of attorneysâ€™ fees charged. Unfortunately, this is the very reason a lawsuit was necessary, to make Mr. Collins and the DSS finally take responsibility for the injuries they allowed to happen to the most vulnerable among us.â€?

Collinsâ€™ big concern now seems to be that news of this settlement will further call into question the reputation of the DSS, which took a beating during the 2003-04 Grand Jury investigation. In that report, Child Welfare was cited for problems with faulty social worker training, low employee morale, and failure to properly report on suspicions of abuse, among other things. The report also identified serious flaws in 17 separate child welfare cases, though this particular case was not one of them.

Collinsâ€™ response to that report boldly disputes most of the Grand Juryâ€™s charges, but some observers conclude that any or all of these alleged internal problems could have contributed to this case. But Collins insists this case is an entirely isolated incident.

In fact, he says, the inner-department mayhem that resulted from this particular foster care case â€” along with the changes he says he voluntarily implemented â€” are what led to what he calls the â€œheavily flawedâ€? Grand Jury investigation in the first place. He says the Grand Jury stepped in just in time to see things in their worst light, and the damning report was the final blow in a losing battle for his department. Heâ€™s quick to point out the departmentâ€™s many successes, including recognition in December by the Childrenâ€™s Defense Fund, which has named the SLO County Child Welfare Services as one of the top-performing agencies in the country.

Deb Hossli, risk manager for the county, says this type of case is rare in the countyâ€™s history, and is the first sheâ€™s seen on this scale in her four years in office.

So whatâ€™s really going on within the DSS? Itâ€™s not easy to tell. Confidentiality laws, intended to protect the privacy of children, often work to prevent public scrutiny of potential problems until long after the courts have settled them. It may be that unless public funds are used to resolve issues â€” for example, the million dollars spent to settle this case â€” we will never know the severity of any problems.

And Collins steadfastly maintains his role as champion of the children. He adds, rather philosophically, â€œItâ€™s not such a bad thing, to be reminded that there are consequences for failure.â€? âˆ†

Staff writer Alice Moss can be reached at amoss@newtimesslo.com.