The story of Undine begins at the bottom of the Mediterranean. The year is 1711—though this fact is of little consequence to those inhabiting the ageless depths of the sea. 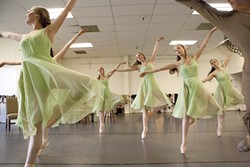 But time passes at a far swifter clip for those who live on the shore. Today, Friedrich de la Motte Fouqué’s slender novella, which tells the haunting story of a water spirit who gains a mortal soul, may be the only work for which the German writer is remembered—all else buried in the sleeping sands of history.

Time passes at breakneck speed for Theresa Slobodnik, Ballet Theatre San Luis Obispo’s artistic director and the creator of an original adaptation of Fouqué’s eerie, romantic fairytale. Slobodnik began developing the ballet roughly a year ago, after coming across the novella online during a search for literary inspiration.

“I went, ‘Oh my gosh, this is it.’ It’s got everything. It’s got imagery. It’s got beautiful settings. It’s got so much drama,” Slobodnik recalls, seated in the company’s downtown studio.

Fouqué’s fairytale had been adapted into a ballet before: the three-act production Ondine commissioned for the Royal Ballet in 1958, choreographed by Sir Frederick Ashton, and scored by Hans Werner Henze. But Slobodnik found that production skipped over all the best parts of Fouqué’s story, while Henze’s music, she said, “didn’t have the ethereal narrative qualities that I wanted. It seemed almost harsh.”

“Deep down under the blue waters, hidden from mortal eyes, are the palaces of the water spirits,” explains Fouqué’s tragic titular character, Undine. “Their walls are built of crystal and are hung with coral, their floors are paved with shining pearls. Deep down under the blue waters are yellow sands. There the merry little water spirits play their games and gambol all the glad long days.” 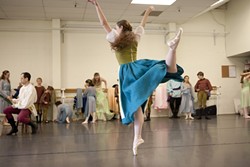 But Undine’s life proves markedly different from the other water spirits’. When she is still a small child, her father, the prince of the Undersea Kingdom, decides his daughter should attain a mortal soul. He asks his brother, the frightening spirit Kühleborn, to take Undine to live with a human family, so that she can have a chance to marry a mortal, thus gaining a soul. Meanwhile, in a small cottage by the shore, a fisherman and his wife (Blair London and Ana Allen) are happily raising a young daughter, Bertalda, a child of the same age. In a particularly heart-wrenching scene, the little Bertalda, reaching out to touch the water’s rippling surface, is whisked away by a sudden wave. But when the couple, stricken with grief at their sudden loss, discovers another strange little girl on their doorstep—dripping wet and spouting some childish babble about underwater castles and shining pearls—they decide to raise her as their own.

Shortly afterward, little Bertalda, whom the couple had given up for lost, is plopped into a meadow by Kühleborn, played by Asael Picasso, where she is adopted by a childless duke and duchess.

Fifteen years fly past. Bertalda, danced by Raquel Estrella, is now a beautiful and refined—if haughty—young woman. Undine, by contrast, is a lovely creature, yet as untamed and unpredictable as the sea. Played by Michelle McLaughlin, Undine often plays tricks on her foster parents, pelting their cottage with water, running away and hiding in the woods, testing their nerves; yet she melts into sorrowful tears when reprimanded. McLaughlin, willowy of build and capable of looking sweetly innocent while being enormously bratty, is a wonderful fit for the capricious title role.

“She’s done a lot of leads,” Slobodnik said of McLaughlin, “but this is the first time she’s created a role in an original full-length. To entrust a role like this to somebody, it’s huge. And she is the person to do it. She’s just this consummate dance artist.”

Costume designers Kimberly Eaton and Nancy Hopkins have created an extensive wardrobe encompassing everything from fisher girls’ simple, workmanlike dresses to the goblins’ uniformly raggedy, earth-toned ensembles to the regal finery of the duke and duchess.

The first act opens as the duke and duchess, Bertalda’s foster parents (Thomas Jogantgen and Claudia Worthen), have thrown a post-hunting party to celebrate the successful return of Sir Huldbrand, danced by James Van Lommel, from a hunt. At the party, the lovely, conceited Bertalda rejects the advances of several noblemen. Huldbrand asks for her glove, a token of her favor.

“You shall have it,” Bertalda replies snootily in Fouqué’s novella, “if you will go alone through the forest which men say is haunted, and bring me tidings of all that happens to you.”

Slobodnik repeated these words again and again as Estrella and Van Lommel rehearsed the pivotal scene in which Bertalda frivolously sends her admirer into certain danger—perhaps death.

“What are you saying to him?” Slobodnik rhetorically called to Estrella. “I like you, but I’m really a brat.”

This intention in mind, Estrella gestures airily in the direction of the Ill-Fated Forest with one hand—dangling her white glove tauntingly with the other.

Setting off for the forest, a place populated with eerie, shifting forms, the knight is confronted several times by Kühleborn, in various disguises, and then by a swarm of goblins (danced, fittingly, by small children; led by the elfin Niko Yaroslaski). Respighi’s Ballata delle gnomidi—the ballad of the gnomes—proves an accurate musical choice.

And Slobodnik abides by her source material, coaching her little goblins to creep quickly across the floor, hunkering low to the ground all the while, like animated clods of earth. As they surround the knight, a nearby brook begins to rise menacingly. (Water scenes in Slobodnik’s Undine—rivers, streams, two storms—are entirely created by dancers, who, through their movements, embody angry, lashing waves or a calm, serene lake.)

Huldbrand, grateful to come upon a humble cottage after the terrors of the forest, thus finds himself at the home of the water spirit Undine, under whose spell he quickly falls. But even the first blush of love is laced with a dull, implacable sense of foreboding—like gazing into a lovely, cloudless sky, all the while suppressing an irrational fear that a terrible storm is close at hand.

Arts Editor Anna Weltner has gadgets and gizmos aplenty. Contact her at aweltner@newtimesslo.com.