That's a seemingly mundane fact—except when you're talking about cannabis.

Over the last three weeks, two developments have come to light about the man who was recently on the short list to become President Donald Trump's secretary of agriculture: Maldonado has a licensed medical cannabis grow on the Santa Barbara County portion of his property. And on the SLO County side, he has a (much larger) industrial hemp farm. 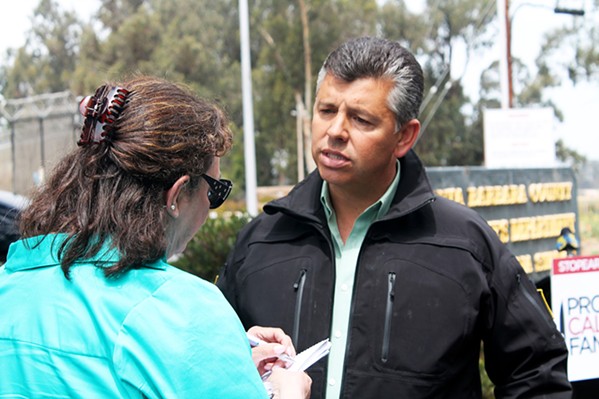 Late last month, the latter site—estimated at 30 acres in size—drew scrutiny from SLO County law enforcement. In stark contrast to Santa Barbara County, which leads all California counties with 1,379 temporarily licensed cannabis farms, SLO County has clamped down on cannabis since voters passed Proposition 64: Only 19 grows in its boundaries were licensed as of press time. Maldonado is not on SLO County's list of registered growers, so when Sheriff's deputies spotted Maldonado's young hemp farm, the county opened a cannabis investigation, which was first reported by New Times on Aug. 9.

The county asked Maldonado to prove the plants were hemp and not cannabis.

Since then, Maldonado handed over lab test results to the county. The plants are in fact hemp and not cannabis, both parties say. The difference between the two crops? Hemp is a particular strain of cannabis containing less than 0.3 percent tetrahydrocannabinol (THC) content (the chemical compound that gets you high), and it's harvested for industrial and medical purposes.

In a statement sent to New Times on Aug. 23, SLO County Planning and Building Department Director Trevor Keith confirmed the county had closed the investigation.

"Our code enforcement staff in coordination with county counsel reviewed documentation that provided evidence that the plants are a hemp cultivation site and there is no violation of county code," Keith said via email.

In a press release the same day, Maldonado rebuked county officials for their handling of the case and announced that he's "a strong advocate for industrial hemp and all its many commercial uses."

"At no time did Runway Farms or myself ever have an illegal 30-acre cannabis grow on my ranch as reported ... by local media outlets," Maldonado said in a statement. "The county staff member who falsely misrepresented that my industrial hemp crop as something other than hemp was 100 percent wrong.

"In the near future, I plan to publicly share more about my passion for industrial hemp farming," he added.

Like cannabis, hemp is also in the process of coming out of the shadows of prohibition. Proposition 64's passage in 2016 put in motion a new regulatory scheme for hemp—but the rules are still under development.

Until the state finalizes its regulations, hemp can only be legally cultivated for research in association with "an established agricultural research institution." It cannot be grown commercially yet.

When Maldonado handed over lab tests of his hemp farm, he also showed county officials a hemp research agreement with Terra Focus LLC. A Mendocino County-based company, Terra Focus registered with the state as an LLC on April 25. Maldonado started his hemp farm in May, according to Brandon Gesicki, his government affairs representative. On July 26—the same day Sheriff's deputies found the farm on routine patrol, sparking the investigation—Terra Focus filed more paperwork with the state labeling the business as an "agricultural research center."

Unlike cannabis, hemp production isn't regulated in SLO County—but it almost was. On June 19, the Board of Supervisors shot down an urgency ordinance that would have banned all hemp production with few exceptions, such as in association with a public research institution like Cal Poly (which does not sponsor hemp research). At that meeting, several local hemp cultivators came out to oppose the ordinance; its provisions would have made private research hemp farms—like the one on Maldonado's property—illegal.

One of those farmers was Frank Brown, a local hemp grower supplying product for research on cannabidiol (CBD), a non-psychoactive chemical in hemp and cannabis with medicinal properties. Brown said he's aware of several hundred acres of hemp being grown in SLO County.

"The supervisors said, 'You know what, let them grow it. There's nothing wrong with it,'" Brown told New Times. "Hemp is not cannabis. There's a world of difference."

Wayne Richman, the executive director of the California Hemp Association, told SLO County supervisors that the limbo period for hemp laws is making it difficult for the industry to find its legs.

"Our farmers are faced with a dilemma," Richman said. "The dilemma is there's a $1 billion market and we're being caught up in bureaucratic stuff." Δ