Like Ry Cooder or David Lindley, Joe Craven is not one to be limited by musical styles. He’s never seen a border he’s not willing to cross or a genre he’s not willing to bend, mash-up, or morph. Hence his new project, Mamajowali, and its style, “Afromericana.” 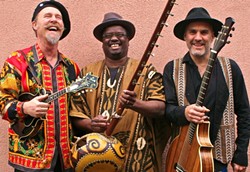 Indeed, on the two tracks I watched on YouTube, I witness three masters of improvisation sonically dance together, with Craven on bongos and body beat-box, sometimes on fiddle or mandolin, layering in the seemingly endless variety of textures over the playing of Sidibe on kamale ngoni and Strauss on guitar.

Even their band name is a mash-up: Mama-Joe-Wally!

To call Craven versatile seems a massive understatement. There’s nothing he can’t do musically, and there’s no object he can’t make into an instrument. In addition to being David Grisman’s sideman for 17 years, he’s been the long-running Live Oak Music Festival emcee, and he feeds off of performance—it’s his vocation, his calling, and he fully throws himself into it

Master kamale ngoni player Mamadou Sidibe is from the Wassoulou region of Mali in West Africa. “Twenty-five years ago, Mamadou played a groundbreaking role in transforming the music of this region from its origins in hunters’ sacred melodies to a music of philosophical observations, politics, and daily life,” according to press materials. “Mamadou was one of the first to expand the six-string donso ngoni (hunter’s harps) with two extra strings, creating the now-popular kamale ngoni. He has recently enhanced the kamale ngoni even further by creating 10- and 12-string kamale ngoni.”

Fingerstyle guitar wiz Walter Strauss draws on American roots, world music traditions, and jazz to create his unique sound. “An accomplished composer and lyricist, he has transposed the intricate music of the kora, a 21-string West African harp, to the guitar to create mind-bending renditions of traditional African melodies,” according to press materials. “Walter has toured with kora virtuoso and 2010 Grammy winner Mamadou Diabate. He has recently returned from Mali where he met and played with some of the great West African musicians, and he is currently working on a duo project with Sidiki Diabate, son of the legendary kora master Toumani Diabate.”

Don’t miss Mamajowali next Friday, Feb. 20, at St. Benedict’s Church in Los Osos at 7:30 p.m. (doors at 7 p.m.; $20 at brownpapertickets.com). This show is made possible through the generous support of KCBX Public Radio and Live Oak Music Festival. Craven says to prepare yourselves for some “listening, a little church dancing, and some musical mischief!”

I can’t imagine a better name for Amber Cross’s new CD than My Kind of Church, which conjures thoughts of both reverence and irreverence, piety and impiety. Cross, in a live recording from the Parkfield Bluegrass Festival, mounts an old-time, roadside, church tent revival with all the classic gospel music you’d expect but none of the fire and brimstone preaching. Instead, she weaves in comments about the traditionals and old covers she’s singing as well as asides about her youth as a Baptist minister’s daughter playing in the churchyard.

The recording—sparsely arranged with Cross on guitar and lead vocals, her husband James Moore on lead guitar, and Gary Arcemont on fiddle, banjo, and mandolin—starts with “Do Lord, Oh Do Lord,” a traditional to the tune of “This Little Light of Mine” written by Harry Dixon Loes circa 1920, and it sets the tone for the entire collection of some old songs (“Church in the Wildwoods” by William S. Pitts, 1857), some not so old (“He Reached Down” by Iris Dement, 2004), and even a couple tunes penned by Cross herself, both of which are fantastic.

Cross has a timeless voice that sounds like it might have been captured in an Appalachians field recording a century ago. When she sings a track like Albert E. Brumley’s 1932 classic “I’ll Fly Away,” you’ll feel transported to another time. And when Arcemont sings lead, backed by Cross on the old traditional “Working on a Building,” well … it’s magic, capturing the same sort of feeling the Coen Brothers and T Bone Burnett managed to capture in the 2000 film
O Brother, Where Art Thou?

You can hear Amber Cross on Friday, Feb. 13, at D’Anbino Vineyards and Cellars when she appears with The Old Time Fiddle and Banjo Show. Portland’s Anny Celsi opens the show
at 7 p.m. ($12; 227-6800). Check her website for other upcoming show: ambercross.com.

More importantly, do yourself a favor and get a hold of My Kind of Church, put it on your CD player some quiet Sunday morning, close your eyes, and be transported to a little white church tucked in among some poplar trees, the early morning light coming sideways through stained-glass windows, and just see if your spirit doesn’t soar a little and that your voice can’t stop itself from joining in as Cross sings “Just a Closer Walk with Thee.”

SLO Brew is at it again, with a whole spread of varied music this week. Things kick off Thursday, Feb. 12, with Tumbleweed Wanderers (7:30 p.m.; all ages; $10 presale or $12 at the door). The Americana-inspired folk, rock, and soul act has a sound that’s both retro and familiar but surprisingly fresh and fun. Check out their video for “Roll with the Times,” and you’ll see everything you need to know about how energizing this Oakland-based quartet is. But don’t expect to hear the horn-driven sounds on this video live. When they tour live, it’s Jeremy Lyon (vocals and guitar), Rob Fidel (vocals, guitar, and banjo), Patrick Glynn (keys and mandolin), and Greg Fleischut (vocals, bass, and guitar).

On Friday, Feb. 13, prepare yourselves for the Tijuana Panthers (7:30 p.m.; all ages; $10) with Magazine Dirty and King Walrus & The Magicians. Expect a barrage of punk, surf, garage, and alternative sounds that will remind you of what rock ’n’ roll is all about!

Get your underground electronica, hip-hop, and urban Latin-hop fix on Saturday, Feb. 14, when the Numbskull and Good Medicine presents The Rapture World Tour with Zion I, Los Rakas, Locksmith, Sunspot Jonz, and Scarub. This is the raw real underground deal—passion and glorious lyricism!

On Sunday, Feb. 15, a touring favorite rolls through once again. SLO Town can’t get enough of Paul Thorn (6:30 p.m.; 21-and-older; $20 presale or $22 at the door), a former prizefighter and preacher’s son turned singer-songwriter whose narratives songs pack an emotional punch. The roots rocker’s got a voice as comfortable as an old sweatshirt, he’s charming as hell, and his band is a tight machine that’s a wonder to behold. His new album, Too Blessed To Be Stressed, is a crowd pleaser.

“In the past, I’ve told stories that were mostly inspired by my own life,” he said in press materials. “This time, I’ve written 11 songs that express more universal truths, and I’ve done it with a purpose: to make people feel good.”

Chronixx and The Zincfence Redemption play Tuesday, Feb. 17 (8 p.m.; all ages; $22 presale or $24 at the door), bringing their rootsy reggae to town with supporting acts Kelissa, a vocalist hailing from St. Andrews, Jamaica, and up-and-coming reggae artist Keznamdi.

Finally, on Wednesday, Feb. 18, check out alt-rockers Cursive (8 p.m.; all ages; $15 presale or $17 at the door). The group’s newest CD, I Am Gemini, tells the “surreal and powerful musical story about Cassius and Pollock, twin brothers separated at birth. One good, one evil: are they two halves of one whole? An unexpected reunion at a house that is not a home ignites a classic struggle for the soul, played out with a cast of supporting characters that includes a chorus of angels and devils, and twin sisters conjoined at the head,” according to press materials. Twinsmith opens the show.

Love is in the air!

If you’re looking for something to do with your special someone on Valentine’s Day, there’s no shortage of events this Saturday, Feb. 14.

Pop singer-songwriter Jann Klose plays Last Stage West at 6 p.m. (free; 461-1393 for more info). Jann’s new album MOSAIC is now on almost 100 radio stations. He’s won the Vox Pop (People’s Vote) in all four categories that he was nominated in this year’s Independent Music Awards. He also sings the part of Tim in the film Greetings from Tim Buckley.

The last I checked, tickets were almost gone, but maybe there’s still a spot for you and your honey pot at the third annual Mardi Gras Masquerade Ball at 7:15 p.m. in the SLO Masonic Lodge (doors at 6 p.m.; $25 presale or $30 at the door; presale at Bon Temps, which will also provide food for sale; or burningjames.com). Top-notch New Orleans-style funksters Burning James and the Funky Flames will provide music for your dancing pleasure.

Central Coast swing favorites The Viper Six will be providing a great evening of vintage swing-jazz, from the romantic to the jumpin’ for your dancing and listening pleasure at D’Anbino (7:30 p.m.; $10). “From Duke Ellington, Benny Goodman, and Billie Holliday to Cab Calloway and Louis Jordan, the Viper Six mixes a cocktail that’s one part class, one part madness, and one hundred percent great music,” says the band.

A lot of women I know consider Damon Castillo a real dreamboat, so fellows, bring your lady to Steynberg Gallery at your own risk when Damon plays an 8 p.m. show, with percussion virtuoso Abraham Robles and keyboard athlete Kristian Ducharme in a stripped-down acoustic setting. “Without ‘Love,’ 99 percent of my oeuvre would vanish immediately,” joked Damon, who’s enlisted Reese Galido to open show. “I’ve been a fan of Reese’s forever, but this will be the first show that we have shared—a musician’s first kiss.” Tickets are $15 and seating is limited (547-0278).