Consider yourself lucky if you weren’t hanging around the 700 block of Marsh Street in downtown San Luis Obispo on the night of Nov. 27.

At approximately 9 p.m., police received a report of a male breaking windows on Marsh Street. According to a department press release, passersby witnessed Dabill throwing himself against windows of businesses lining the street, though police said he didn’t actually break any windows.

According to the release, however, Dabill then allegedly approached a woman getting into her car and attempted to force his way into the vehicle. The woman reportedly pushed the suspect out and got away. 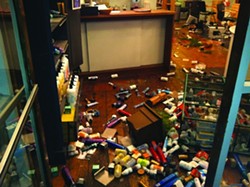 That’s when Dabill allegedly turned his sights on the neighboring Bluebird Salon. After reportedly overturning a couple of large potted plants in front of the salon, he entered the establishment, which was still open for business.

Sammy Williams, an employee working at the salon at the time, told New Times that the man threw a roughly 5-foot-tall shelf full of beauty products onto the floor and proceeded to launch chairs, products, and display items about the place. She said he was screaming obscenities directly aimed at “Bluebird,” indicating he knew where he was.

The staff and customers quickly exited through a back door, waiting outside until police arrived. She said the man left through the front. Luckily, no one inside was injured, though police estimated thousands of dollars of damage to the salon.

Dabill then allegedly fled the scene on foot, though witnesses were able to alert officers of his whereabouts. A few minutes later, a New Times reporter witnessed more than half a dozen police vehicles near the Highway 101-Marsh Street off-ramp, where it’s believed the suspect was apprehended without incident.

Dabill was booked into the county jail on suspicion of burglary, false imprisonment, and felony vandalism, with $20,000 bail. He remained behind bars as of press time.

SLOPD Cpt. Chris Staley said it was unknown as of press time what set the suspect off.