George Saunders reads from his novel onstage at the PAC

Acclaimed author George Saunders will
read from his recently published first novel,
Lincoln in the Bardo, at the PAC on
the Cal Poly campus on Sept. 30 at 8 p.m.
For ticket info, visit calpolyarts.org.
The cost ranges from $27.20 to $104 per person.

In his first novel, George Saunders takes readers into th 19th century, through death, and to the bardo, an in-between place where various souls are still hanging onto something dear from their lives. Dozens of characters populate Lincoln in the Bardo, and whether they've passed into the grave or are yet living, these souls are pressed up against their humanity in the face of loss and sorrow. 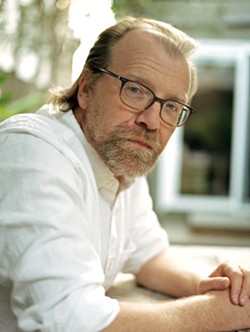 Come Sept. 30, the acclaimed author will bring his voice to SLO County by reading excerpts from his novel at the PAC on the Cal Poly campus.

Over the past two decades, Saunders has cultivated compassion and wit in his writings, and his style and voice have captured the attention of the literary world, students, and readers across the country and beyond. He has four short story collections to his name plus a novella, a book of essays, and a children's book. He has often been published in GQ, Harpers Magazine, and The New Yorker, and TIME named him one of the 100 Most Influential People in the World in 2013.

Accolades aside, Saunders' characters are relatable. His works cut to the heart of the human condition with equal parts grit and whimsy, sans sentimentality. He keeps readers on the hook, almost daring them to finish his stories without some level of understanding and empathy for his characters.

In Lincoln in the Bardo, Saunders weaves together historical and fictional accounts of President Abraham Lincoln grieving the loss of his young son. As in real life, some of these accounts differ, and the space between perspectives heightens the novel's drama and poignant emotions.

Saunders recently conversed with New Times over email regarding his upcoming reading, this first novel, and literature in general.

New Times: What do you enjoy most about reading to an audience?

George Saunders: Well, I'm a natural ham, so I like the sense of real-time connection—the feeling of everyone sort of leaning into the story together. Reading can underscore this idea that I feel is very important to my writing process—namely, that writing is a form of communication between reader and writer. Not a lecture or a performance, but an intimate connection, that either moves/persuades the reader, or doesn't.

NT: So much of Lincoln in the Bardo is concerned with characters telling their stories, to remember them and then share them. Why might it be important for us to hear—beyond reading—stories?

GS: Well, in their case, they are telling their stories to underscore their identities—sort of like The Ancient Mariner, in the Coleridge poem. Beyond that—I was raised on the south side of Chicago, which, it turns out, is a real storyteller's paradise. But so much of what is good about a Chicago story is in the spoken voice—the small emphases and pauses and even, you know, the eye-rolls, or assumed accents. So I've noticed that people will sometimes say that they understand my stories better once they hear them read aloud.

NT: How do you choose what to read to an audience, especially from Lincoln in the Bardo? What types of scenes do you gravitate toward when reading aloud?

GS: Generally, I like to read something self-contained and entertaining. Funny is good. Again—I want to make it fun for the audience and for them to feel like we've been through an experience together, preferably a pleasurable one.

NT: How are you planning to present the reading? Will you perform different voices for the many characters?

GS: That book is tough. It's made up of hundreds of monologues, and it's a tough sell if I'm the only one doing it—I can't do that many voices. We've been doing a staged reading from one section, that uses six actors. So, planning is ongoing for the Cal Poly reading.

NT: After writing primarily short stories, you turned your energies to what is now Lincoln in the Bardo. In a 2013 conversation with David Sedaris, you'd said the novel in its early stages was shaping up to be a "worthy adversary." How did your relationship to the novel's writing process continue—did it remain a worthy adversary? And do you find that kind of challenge motivating to you as a writer?

GS: Yes, it was a worthy adversary right to the end. I love the notion of writing as a form of self-expansion—to take on a project with the hope that it will challenge you technically, because a technical challenge always leads to personal growth, or a corresponding expansion in your understanding of the world. Form and ethos are connected that way, I think. And I am also a big believer in "not knowing"—that is, not knowing in advance what you want to say, or what your theme is, or ... well, anything. Let the story tell you what it wants to be. I find that really exciting.

NT: One of the most striking aspects of Lincoln in the Bardo is its form. What inspired you to write it in such a visually airy way? Had you ever seen a novel presented in a form like that? 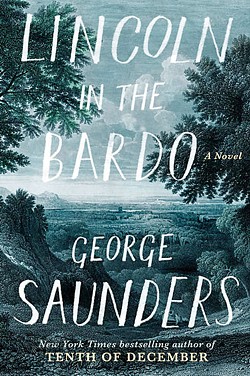 GS: That was suggested to me by the material. One good writing-related mantra is, "Try not to suck." When I tried to write this particular (Lincoln-involving, 19th-century) story in more conventional ways (or, more truthfully, when I thought about writing it in those more conventional ways), the potential for suckiness was great. So, one way of thinking about form is simply: to find form, lurch away from suckiness. This monologue-based form was a way of avoiding those obligatory third-person sentences like, "On a stormy night, Abraham Lincoln, having just lost his beloved son, Willie, walked into the deserted graveyard." Ugh. I think I was influenced, also, by that George Plimpton book, Edie—an unconventional biography of Edie Sedgwick, made up of hundreds of (sometimes contradictory) personal stories about her, told by friends and acquaintances—no authoritative narrator, no final arbiter—just a bunch of voices, and the final story is just that accumulation of notions.

NT: You mentioned in the Sedaris interview that you'd had the idea for Lincoln in the Bardo for 15 years—were you doing research in that time?

GS: No, the delay was just because I wasn't ready to write it yet. The book required a tone that I wasn't confident with when I was younger. Hard to explain—but I think all of the writing I was doing all of those years taught me some things I would need to know to do this story justice. Something to do with being confident enough to be a little less manic, and confident that I could find some verbal charm, even when contemporary diction was denied me.

NT: What are some non-writing-related practices or disciplines of yours that help your writing the most, that shape or inform you as a writer? Where do you turn to be nourished and grounded?

GS: I love music. I listen to it and play it (badly). During the last stages of this book, I'd take breaks from writing and crank up some Wilco or Sleater-Kinney, just to remind myself of what intensity felt like on the receiving end, and then I'd listen to Copland or a beautiful song called "Appalachia Waltz" by Mark O'Connor, to take myself back into this sort of pastoral 19th-century mindset. Music sort of resets my aspiration-to-beauty—makes me want to make something as moving and intense.

NT: What were some of your favorite stories or types of stories as a child?

GS: There were a lot of good storytellers in my family, and I think what I retained from that was how mixed-mode the stories were—funny and smutty, sometimes, but also moving and human and sad. In retrospect, I can also see that in many of the stories, the joke was "on" the storyteller; he or she was put through some funny/degrading thing. I once heard Junot Diaz say that he thought writers tended to come out of backgrounds where they learned that language was power; in our family, if you could get somebody to laugh, that was a very powerful thing. For a few minutes, a kid got upgraded to a full adult, if he could get a laugh.

NT: What excites you—and what do you think readers should find exciting—about the current state of American fiction?

GS: This might be a weird thing to say but I think American lit is starting to get more spiritual. There's more attention being paid to the notion that we live in this world by grace and have to make it worthwhile, and take responsibility for our presence here. I don't mean stories that are preachy—but stories that are sane and thoughtful and humane. I see fewer stories that seem to be filled with posturing, or exist as vehicles to show how cool and edgy and naughty the writer is. That is: stories where the things that actually matter, actually matter.

NT: Many of your stories are about characters choosing or rejecting empathy, and in the novel the main characters are changed through selfless, empathetic acts. Do you see anything different today vs. when you were writing some of your earliest stories about how humans treat each other and themselves?

GS: Not really. I mean, I have always hoped to be writing with the long view in mind—hopeful that my stories, at their core, will still have meaning in 50 years, i.e., are concerned with things that, for better or worse, will still be going on in human hearts and heads at that time. The one thing I've noticed (that I maybe wasn't aware of when I was writing them) is that my early stories almost all concern money, specifically the shortage of it, and the degrading effect this has on people. They are, essentially, class stories. They were written at the beginning of that great and terrible movement wherein all of the money went up, to those at the top of the heap, and I feel that in the stories, this sense that the paradise that America was supposed to be was being actively gutted, by corporate greed and materialism, and that the people in the stories are suffering from the early effects of that. And I can't help but connect that with our current political crisis, in which that agitation and sense of being left behind was co-opted by a cynical movement that, instead of blaming income inequality on the forces that really caused it (see, "greed and materialism," above), chose to blame it on "the other," and, in misunderstanding it in this way, will only make things worse. Δ

Proofreader Andrea Rooks is as excited about the 30th of September as the Tenth of December. Comment at arooks@newtimesslo.com.