Most victims of sexual violence don’t report their stories, according to Jeni Ambrose. She draws these figures from several organizations, including the World Health Organization. But she also draws upon her own experiences as a licensed therapist in a private practice located in Santa Barbara.

Working with survivors of sexual violence, Ambrose sought to make a bigger impact and began looking for comprehensive data on this subject. Much to Ambrose’s surprise, she realized the information she wanted was either scattered or non-existent. 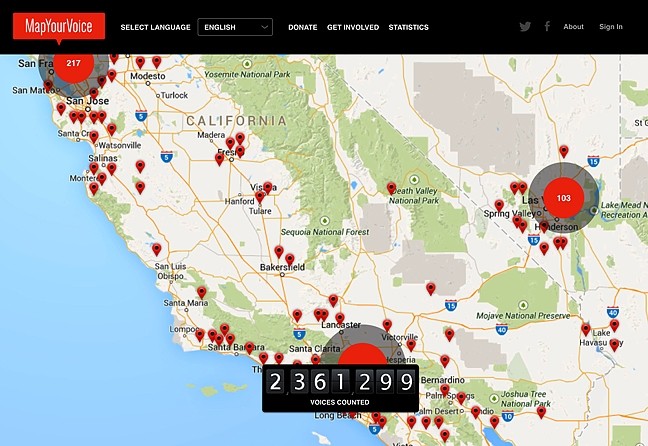 “I wanted to find something that I can jump on board with,” Ambrose said. “I did a lot of research and found nothing on any sort of significant scale.”

Ambrose realized that the lack of technology became a barrier for victim reporting and data collection. This became the catalyst for MapYourVoice.org, a website for survivors of sexual violence to anonymously report their stories. The site was created by Ambrose and her nonprofit, the Global Change Project.

Currently in development, the website acts as an intake for victim’s stories. It will offer a questionnaire to those who want to report and maps the reports based on ZIP code. Due to the taboo nature of sexual violence, Ambrose said that getting their stories out is the first step for victims on their way to recovery.

The plan is to demonstrate what the problem is in a visual way. From the reports, the website will provide data to law enforcement, advocates, academia, and public health officials. The two main goals of doing this, according to Ambrose, are to help survivors and prevent people from becoming victims.

She mentions the “Bill Cosby effect”—where one person speaking out causes a flood of more people to come forward with their stories.

“It’s kind of a snowball effect of empowerment,” Ambrose said.

Ambrose is counting on three functions of the project to make this happen: the use of social media in concert with the website, a geomapping capability, and the use of smartphones and mobile devices. Victims’ stories appear as a dot on a map based on ZIP code.

“With the data from MapYourVoice, we are looking to provide information—data sets—that doesn’t exist,” Ambrose said. “When you’re talking about a global epidemic of people who tell what happens to them, it’s not like malaria where people aren’t ashamed of having malaria.”

Through her research, Ambrose estimates that 87 percent of victims don’t report their stories. The statistic is even worse for men, she said.

“We’re talking about incredibly taboo topics,” Ambrose said. “Specifically males, who feel so much more intimidated about speaking up. Maybe this can be a platform for them.”

It gets even more difficult for victims in rural or remote areas, Ambrose said, where resources are scarce. Because of the pervasiveness of smartphones in the last five years, more people have access to the outside world than ever before. MapYourVoice will also include a free smartphone app.

A beta version of the project is currently in development, and Ambrose hopes to have it ready by this fall. In order to make that possible, a crowdfunding campaign is underway to fund the rest of the project. The goal is to reach $35,000 by the end of September, but the-sooner-the-better, Ambrose said. As of Aug. 19, the project was 22 percent funded, having collected $7,725.

She is also looking for local philanthropy. Ambrose believes her project could be a good social investment for local tech companies.

The website is not fully functional, but Ambrose said she’s already received a flood of emails from people claiming to be survivors, which she will use to build the website. She’s already seeing data emerge from several parts of the Central Coast, including SLO County.

“Watching the list grow is part of the validation,” Ambrose said.

To donate to the MapYourVoice project, visit crowdrise.com/mapyourvoice/fundraiser. All donations are tax-deductable.

Sun Staff Writer David Minsky from New Times sister paper to the south wrote this week’s Strokes and Plugs. Information should be sent to the strokes@newtimesslo.com.