Social dancing is always a blast to watch. The formal elegance of ballroom, the corny joy of square dancing, the swagger of hip-hop, the percussive bounce of tap—I love it all. But for sheer, unmitigated exuberance, nothing beats swing. Whether it's East Coast, Jitterbug, modern jive, or Lindy Hop, swing is king, and this Monday, May 6, at the Madonna Inn ballroom, you can check out swing dancers from the SLO Rugcutters as they dance to the sounds of MarciJean and the Belmont Kings (8 to 11 p.m.; all ages; free).

Want to join in but you don't know how? Never fear! The SLO Rugcutters will offer free lessons! 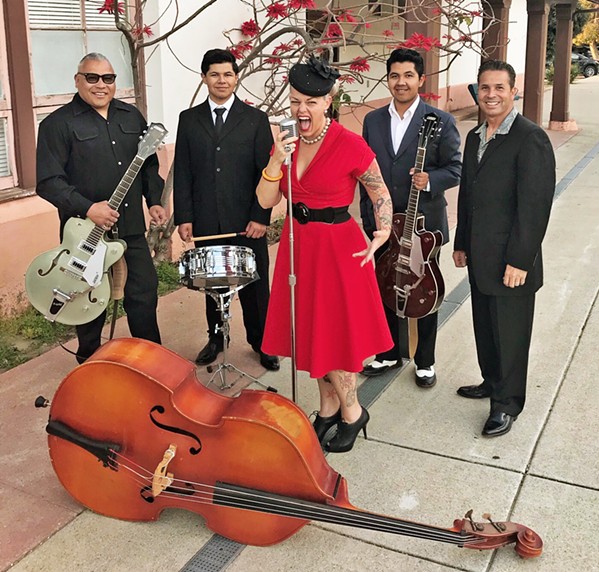 "My whole life I've been spellbound by swing," lead singer MarciJean Fambrini said. "I've spent many years in different swing bands in the Bay Area, but the kind of swing that gets me excited is jump blues. In the '40s and '50s, all the fancy 15-piece orchestras were playing in the high society supper clubs. I would kill to be a fly on the wall during that era! But if I had a time machine I wouldn't go there, I would go to the juke joints! The African-Americans' culture from that era is what gets me really going! MarciJean and the Belmont Kings is our attempt to bring you with us to the juke joint on the other side of the tracks."

The Belmont Kings is made up of Mark Garza and Dave Bourbon, formerly of The Hydromatics. Garza also plays in the Drive-In Romeos from Santa Maria. The band also includes brothers Emanuel "Manny" Martinez and Jonathan "JJ" Martinez, who "are from an incredibly talented musical family and have a band called UMO," Fambrini noted.

Put your dancing shoes on and get ready to boogie-woogie!

Hot on the heels of the Earth Day Festival, Laguna Lake Park is ready to host another big outdoor event, this one geared toward college-age kids. Shabang Reborn started small—a few friends and a guitar—but has grown into a massive music and arts festival on Saturday, May 4 (noon to 10 p.m.; $38.28 presale, $9.52 presale shuttle, $107.50 VIP at shabangslo.com). It features three stages, games, vendors, food trucks, and more.

"A portion of the profits generated from Shabang is given to a local nonprofit that is chosen by our attendees in the weeks prior to the event," Shabang organizers said. "In the past, we have gifted enough musical equipment to the SLO Boys and Girls Club to start a music class, and continue to help the local community in any way we can. Join us for a Shabang that will exceed all expectations. The sun will be shining, and the trees will be singing. We can't wait to see you there."

After the Shabang, head over to the downtown SLO Brew for the after-party with DJ Sevens and Sean Ross, hip-hop opener Wynn, and headlining party act James Kaye (10 p.m. to 2 a.m., 21-and-older; free with a Shabang wristband).

James Kaye was a super popular local performer and New Times Music Award winner who now resides and works out of the LA area. According to his manager, Vic Alvarez, "He recently collaborated with DJ Pauly D from Jersey Shore on a new single, 'Silver and Gold,' which has been gaining a lot of traction. It was recently featured in variety.com, Live with Kelly and Ryan, and it's currently being played in over 2,000 locations nationwide."

"Since I've been in LA, we've opened a recording studio in North Hollywood, and I did that Pauly D thing, and played Las Vegas," Kaye said. "I'm recording a new five-song EP, The Coconut EP, which should be out at the end of May, and I'm hoping to come back to SLO for an album release party."

"Dude, LA is awesome! I was kind of nervous coming from a small town, but I've met so many cool people, producers, and artists coming to follow their rock 'n' roll dreams. I've always loved SLO—that's where my roots are, where I cut my teeth—which is why I love coming home."

Welcome Kaye back after the Shabang!

While we're on the topic, SLO Brew Rock has a Cinco de Mayo fiesta with Latin ska, reggae, and cumbia band Mento Buru (noon to 8 p.m.; all ages; free). You can try their new line of Tío Rodrigo Craft Beer Micheladas! Guests can expect a fully stocked build-your-own michelada bar with chamoy, tajin, fresh mango, tamarindo sticks, and blood oranges, among other fixings.

Also at SLO Brew Rock, KCPR presents Omar Apollo on Tuesday, May 7 (7 p.m.; 18-and-older; $18 presale at slobrew.com, $25 at the door, $58 VIP; standing room only). According to his bio, "after dropping out of college only two weeks in, Omar Apollo, a 20-year-old, first-generation Mexican-American singer from Indiana, began writing and recording his own mix of jazz, R&B, funk, alternative, soul, and pop music. Omar is going to release his debut EP this summer featuring songs in both English and Spanish." 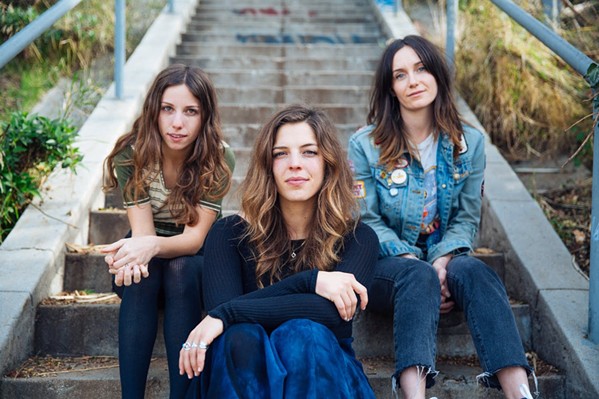 Three at the Fremont

You can still snag tickets for husband and wife Gungor on Thursday, May 2 (8 p.m.; all ages; $30.83 to $42.56 at fremonslo.com or Boo Boo Records), with The Brilliance and Propaganda opening. Gungor is Michael and Lisa Gungor, who've been compared to Arcade Fire, Bon Iver, and Sufjan Stevens. 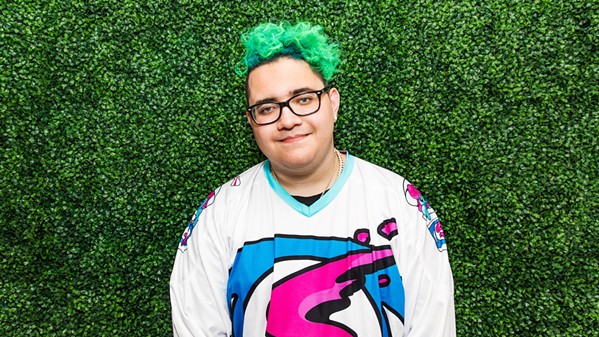 Slushii plays on Tuesday, May 7 (8 p.m.; 16-and-older; $35.52), on the Monster Energy Outbreak Tour. The DJ, singer, and producer delivers candy-coated pop nuggets in the dubstep, future bass, electro house, and trap music genres. Imagine you're high on sugar and trapped inside a video game ... yay!

Electronica, synth-pop, and neo-psychedelia act STRFKR (pronounced "star fucker") plays on Wednesday, May 8 (9 p.m.; 16-and-older; $27.31). They're touring in support of their fourth album, Being No One, Going Nowhere. This is indie pop at its most charming.

He's enjoyed international hits with songs such as "Lost My Sonia," "Tune In," and "Rocking Dolly." The Jamaica-born artist was only 14 years old when his first song, "Searching In The Hills," was released in 1974. The song "was far from a financial success," according to his bio, and he turned to work as a jockey and fisherman, but he eventually returned to music, and success found him in 1983 with "Rocking Dolly."

This is a must-see for reggae fans!

Singer Mary Anne Anderson has created a really interesting one-woman show called Happy to Make Your Acquaintance, which will run Friday, May 3, and Saturday, May 4, in the Cambria Center for the Arts Theatre (7 p.m.; all ages; $22 at my805tix.com).

In it, snippets of songs such as Harry Belafonte's "Day-O," Richie Havens' "High Flyin' Bird," and Carmen McRae's "Happy to Make Your Acquaintance" trigger Anderson's memories of her past and the music that informed her own artistry. In all, she talks about inspiration from 21 artists and more than 30 of their songs.

She describes the show as "narration on tape with gobs of music, telling my life story through the portal of music—songs that played throughout my lifetime and the events that occurred then. It's a musical memoir of sorts."

It's quite a ride!

Jineanne Coderre will release her new pop EP, Listen, on Friday, May 3 (5 to 8 p.m.; all ages; free), at Presqu'ile Winery in Santa Maria. Damon Castillo produced, engineered, and mixed her EP, and The Damon Castillo Band will open for an hour before she joins the band to showcase her original songs.

The Red Barn Community Music Series presents Casy Meikle on Saturday, May 4 (5 p.m. potluck, 6 p.m. show; all ages; $15 at the door; BYOB). Meikle's an old-time fiddler who'll be joined by Brock Rovenstine and Austin Derryberry of Middle Tennessee, as well as a variety of locals, to make for a special evening among friends. Δ