Locals may have tipped back a bottle or two in honor of Fat Tuesday, but the overall Mardi Gras mood was subdued this year in San Luis Obispo. In the days after what was historically a weekend of intense revelry and celebration in the city, the San Luis Obispo Police Department reported long lines at bars but scant parties throughout the town for 2007. 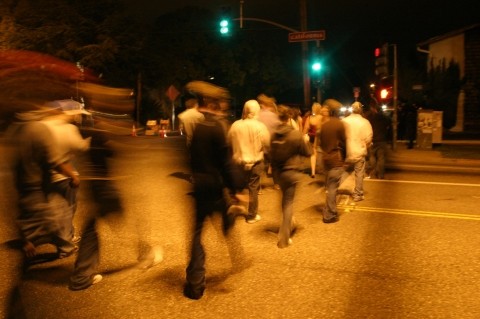 # Confident that the party spirit was sufficiently broken in town, officials this year stepped back the major law-enforcement crackdown that first surfaced after a 2004 skirmish between hundreds of rowdy partiers and police. Still, city ordinances that upped the penalties for a variety of offenses including underage drinking and public urination during the days before and after Mardi Gras remained in effect.

Capt. Dan Blanke of the San Luis Obispo Police Department prepared a report following the end of this year's law-enforcement operation. That report recapped the history behind 2005's "The Party is Over Campaign," which kicked off a three-year operation "to end the over-indulgent, violent conduct associated with celebrating Mardi Gras in San Luis Obispo."

This year, the department sent about 120 personnel from the SLOPD, the California Highway Patrol, the SLO County Sheriff's Department, and other agencies through the city on the Friday and Saturday nights before Mardi Gras. On the night itself, about 30 personnel patrolled the streets.

Overall, the department reported that arrests made during the Mardi Gras window this year were down 35 percent from the year before and down 85 percent from 2004.

The department noted that the arrest totals from Saturday and Tuesday nights this year didn't rise to the level of even a typical Saturday or Tuesday night.

The costs associated with the 2007 operation won't be calculated for several weeks, but the department reported that the multi-year effort to turn San Luis Obispo's Mardi Gras into a non-event and erase it from the public's memory exceeded $2 million. ?