Mare of Easttown is a thorny mystery and gripping character study

Craig Zobel directs this story by Brad Ingelsby about Marianne "Mare" Sheehan (Kate Winslet), a detective sergeant in Easttown, a suburb of Philadelphia. The former high-school basketball star and local hero for the game-winning shot in a state championship 25 years ago now finds her life in a shambles—a son lost to suicide, a divorce, and an ex-daughter-in-law with a drug problem battling for custody of Mare's grandson. She's investigating the murder of an unwed teenage mother while she's been unable to resolve the case of another missing teenager who's been gone for a year, leading many in the town to doubt her abilities. (seven 58- to 76-min. episodes totaling 403 min.) 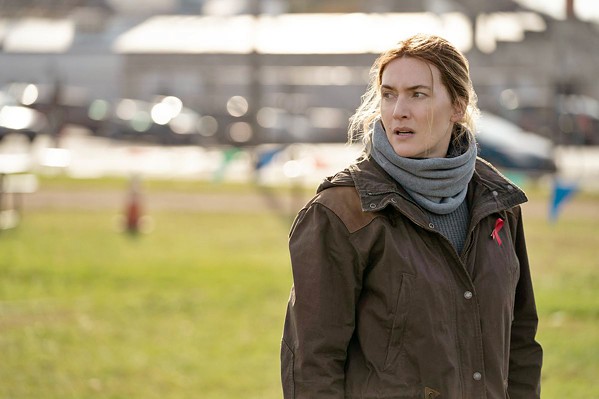 Glen You know you're onto something that's struck a chord with the public when Saturday Night Live is lampooning your miniseries before it's even finished airing (See "Murdur Durdur" on YouTube). Mare is such a compelling and tragic character, and Winslet is wonderful in the role of the stoic detective who can never let her guard down. Winslet has to pull off the impossible task of communicating her deep pain while actively hiding it from others, and watching her work here is a reminder of just how gifted this Oscar winner can be with the right material. Thanks to creator and screenwriter Brad Ingelsby (Out of the Furnace, Run All Night, The Way Back), we've got a cracking good mystery afoot. Like any good crime thriller, there are plenty of red herrings to misdirect you, and just when you think you have it figured out, you don't ... right up till the very end. Now that all seven episodes are out, prepare yourself to get sucked in. We've been watching week by week, but I bet if I started it today, I'd let it eat up the whole day. It's that engrossing. The characters feel so authentic, and the series is grounded in a real sense of place and a sense of community. This could be any small town and anyone's tragedy.

Anna Winslet is utter perfection for this gritty and twisty thriller. What a stunning reminder of her force of talent. She's so adept at finding the realness in her characters, and Mare gives her plenty to work with—a flawed and tough character who can't bear to deal with the pain of losing her son and pushes it far below the surface. It's inevitably going to surface though, and watching this character not only work through her calculated and honed skills as a detective but also make incredibly rash and terrible decisions in her personal life is a delicate balance, and Winslet pulls it all off beautifully. The entire cast deserves recognition, from Jean Smart as her mother, Helen, who is a constant but ultimately caring thorn in Mare's side to her partner in the investigation, Detective Colin Zabel (Evan Peters), who we learn is trying to earn the bravado he has taken credit for in the past. Everyone here is fantastic, and whoever the dialect coaches were for this crew did a phenomenal job. It felt and sounded authentic all around.

Glen This series really proves the power of long-form television. For years, the movie biz was the big kahuna and TV was low rent, but now we're seeing big movie stars like Winslet, Amy Adams (Sharp Objects), Nicole Kidman (Big Little Lies), Hugh Grant (The Undoing), and Chris Evans (Defending Jacob) in these richly developed, thoroughly engrossing stories that can do things you just can't do in 90 minutes or two hours. The murder of Erin McMenamin (Cailee Spaeny) may have provided Mare of Easttown with its plot, but this is also a character study of mothers and an examination of motherhood. Mare's mother, Helen, must confront her former neglect of Mare. Mare's ex-daughter-in-law, Carrie (Sosie Bacon), must admit her inability to care for her son—Mare's beloved grandson. Finally, Mare's best friend, Lori Ross (Julianne Nicholson), must learn to live with her decisions regarding her children and husband. We get to vividly know these characters, and their sadness becomes palpable. They're imperfect, sometimes downright terrible, but they're tangibly real.

Anna It really is a heartbreaking journey into the worlds of these everyday people who are just trying to get through the daily slog and find some peaceful resolution. We're drawn in by their stories and the talent behind the characters, and intrigued week by week as the story unfolds, refolds, and eventually falls open. The community around Mare is almost like one big family, but a dysfunctional and difficult one. While this is bingeable now as all episodes have been released, I loved watching the story drawn out over time and looking forward to Sunday night episodes. There's a lot of meat here, and it's worth it to give the story time to breathe—who doesn't like a whodunit and a twisty-turny plot line? I've heard this series talked about anywhere and everywhere, so I doubt it hasn't already fallen on most people's radars, but if you haven't jumped in yet, now is the time. It's totally worth every heartbreaking moment. Δ