The county's only medical marijuana dispensary has shut down, although its owner hopes to reopen in a new location. 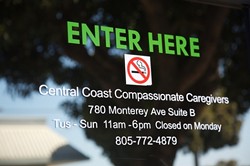 # served with a warrant in March in a joint operation by the U.S. Drug Enforcement Administration and the SLO County Sheriff's Department ended operations on May 16.

According to the cannabis club's attorney, Lou Koory, the club was informed by its landlord, Bob Davis, that he had been contacted by DEA officials and told the building could be seized under federal law if the dispensary continued to operate.

Davis declined to comment when reached by New Times.

Koory said club owner and operator Charles Lynch was told of the DEA's intimidating talk in a phone call by Davis more than a month ago. Following that call, the club was given a 30-day notice to vacate from the property on Monterey Street.

"He did what he thought was necessary," Koory said.

Koory said Lynch would like to reopen and would prefer to stay in Morro Bay, but the city currently has a moratorium that would prevent any dispensary from applying for a business license.

The attorney noted that Morro Bay city officials are working on an ordinance that would allow a certain number of dispensaries to operate in the city. He said, however, that it's more likely that a dispensary would be accepted in unincorporated towns such as Los Osos, Oceano, and Templeton. 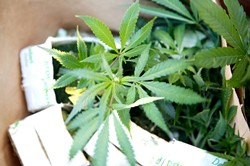 # The club closed for a brief period after the March 29 search warrant was served and sheriff's detectives and federal agents seized marijuana, computer hard drives, and other club property.

California's medical marijuana dispensaries operate in a legal gray area although state voters legalized marijuana for medical uses with a doctor's prescription in a ballot initiative, the state's stance conflicts with federal law and the DEA has taken actions against dozens of dispensaries.

DEA special agent Sarah Pullen said she couldn't verify if the phone call with the landlord took place because of the ongoing investigation. However, she did say the DEA has used similar tactics before.

"It has happened in the past," she said. "It is under civil forfeiture law that property is [vulnerable to] seizure if it is used for criminal activity."