Marijuana dispensary is back in business

Alittle more than a week after federal agents and county detectives served a sealed warrant on Central Coast Compassionate Caregivers in Morro Bay, the medicinal marijuana dispensary reopened its doors for business. 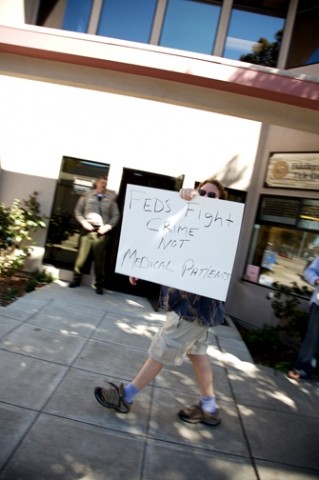 # On March 29, about a dozen law-enforcement officials from the U.S. Drug Enforcement Administration and the Santa Barbara County Sheriff's Department arrived as Charles Lynch's business was opening for the day. All told, the agents hauled away several large plastic bins of marijuana, computer hard drives, and boxes and bags considered evidence. They also wrote down information from patients who arrived throughout the day.

Lou Koory, attorney for Lynch and Central Coast Compassionate Caregivers, said that the cannabis club re-opened on April 7, the day before Easter.

They're keeping normal business hours, Koory said, "and continuing to comply with state law and the business license issued by Morro Bay.

"There are conditions on that license," Koory added. "They're pretty strict."

In the days after the action, several patients reported that they hadn't heard from any agencies in regard to the information that was collected under the warrant or as they approached the door to the business during the raid.

As of April 10, Sheriff's Sgt. Brian Hascall said that the warrant as well as one served on Lynch's Arroyo Grande residence would possibly be unsealed in a week to a week and a half. The sealed nature of the warrants prevented him from commenting on the initial trigger for the investigation, though he did say the Sheriff's Department started it and then requested assistance from the DEA.