Marriage fight may go on

Decision could be challenged.

At press time, the supporters of Proposition 8 had declared victory with a 52 percent to 48 percent lead that amounted to about 400,000 votes. Supporters of same-sex marriage, however, weren’t conceding, noting that several million absentee and provisional ballots remained to be counted.

Even if the law is overturned, one legal expert predicted Proposition 8 will likely face a legal challenge.

Law professor Eileen Scallen, a legal expert on the California Supreme Court decision that allowed same-sex couples to marry who spoke at Cal Poly last month, said a court challenge could be mounted. 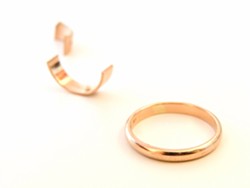 “It seems to me that it is a violation of minority rights for the majority to be able to essentially vote on other peoples’ civil rights,” said Scallen, who teaches at William Mitchell College of Law in Minnesota. “That violates, I think, every fundamental principle of fairness in our federal Constitution as well as the California Constitution.”

If Proposition 8 stands, it’s unknown how it will affect those marriages already performed since the decision.

“Ordinarily, legal changes are applied only prospectively, forward, rather than retroactively,” she said. But, she added, “This leaves those individuals in legal limbo.”

Legal experts say California is unusually liberal in allowing its constitution to be amended with a simple majority vote. Other states, including Minnesota, have higher bars.

In an election-eve statement, Yes on 8 Chairman Ron Prentice called the apparent victory “a great day for marriage.” He went on to state: “Just as it was before the Supreme Court’s ruling, only marriage between a man and a woman will be valid or recognized in California, regardless of when or where performed.”

In California, where Sen. Barack Obama’s victory was widely expected, Proposition 8 was the most hard-fought election battle.

Spending for and against the measure reached nearly $75 million, much of it from out-of-state groups including the Church of Jesus Christ of Latter-day Saints.

Locally, donations were heavily tilted in favor of the proposition banning same-sex marriages. According to the most recent results in a database compiled by the Los Angeles Times, $300,256 had been contributed from county residents in favor of Proposition 8, compared to $36,723 opposing the proposition.

The vote in San Luis Obispo County wasn’t nearly as lopsided as contributions and closely matched the state outcome, with 51 percent in favor of Proposition 8 and 49 percent opposed.

The fight grew out of an earlier ballot measure banning gay marriages eight years ago; the Supreme Court decision overturned that ban.

Although the original ban carried handily, with 61 percent support, same-sex marriage supporters voiced optimism heading into this battle, convinced that opinions and attitudes had changed.