Marx is the new SLO mayor; council will choose a new member

It's a new day for the San Luis Obispo City Council. 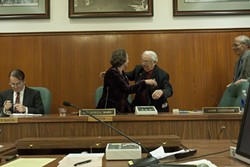 Jan Marx was sworn in as mayor at a special council meeting on Dec. 1, taking the gavel from retiring Mayor Dave Romero.

Re-elected Councilman Andrew Carter was sworn in for another four-year term, as was former council member Kathy Smith.

Handing the gavel to the new mayor was the final act in Romero’s long career with the city. The ceremony capped his more than 50 years of service for San Luis Obispo, first as the long-time director of public works and then as city councilman and mayor.

Councilman Allen Settle also stepped down after a long tenure on the council as council member, as well as mayor.

After the swearing in of the new City Council, the new body had to deal with the vacancy left by Marx when she won the mayor’s seat; she had two years left in her term when she ran.

The three council members and new mayor voted to fill the vacancy by appointment, a method the council used to fill vacancies in 1994 and 1998.

Applicants have until Dec. 13 to submit an application to the city for the council seat, and the vote takes place Dec. 21. Each applicant, according to the city charter, “is encouraged to submit a 200-word statement of qualifications stating the amount of time available each week to devote to the Council, reasons for wanting to be appointed, involvement in community affairs and organizations, especially in the preceding 23-month period, personal qualifications for the position, and prior experience in government, or areas associated with or doing business with government.”

If the City Council can’t agree on a choice for the seat, the public will make the choice in a special election.

Several city residents have put themselves up for consideration for the vacant council seat. One is Dan Carpenter, who was the leading runner-up for City Council in the Nov. 2 election. Carlyn Christianson, a county planning commissioner and former member of the city Planning Commission, has also declared her interest. Kevin Rice, a local activist, has also announced he’s interested in the council seat.

Patty Andreen, a former school board member who lost to Jerry Lenthall in a county supervisor race in 2004 and a supporter of both Mayor Marx and Smith, is in the running. ∆