'Mary Poppins Returns' is a worthy sequel to its 1964 original

Rob Marshall (Chicago, Memoirs of a Geisha, Pirates of the Caribbean: One Stranger Tides, Into the Woods) directs this sequel to the 1964 classic about a magical nanny who helps two neglected children reconnect with their father. This time around, Mary Poppins (Emily Blunt) returns to the Banks family children who are now adults. Michael Banks (Ben Whishaw) lives with his three children—Anabel (Pixie Davies), John (Nathanael Saleh), Georgie (Joel Dawson)—and their housekeeper, Ellen (Julie Walters), in the same house on Cherry Tree Lane. With encouragement by Michael's sister, Jane (Emily Mortimer), and the help of lamplighter, Jack (Lin-Manuel Miranda), Mary helps the new set of Banks children find the joy in life. (130 min.) 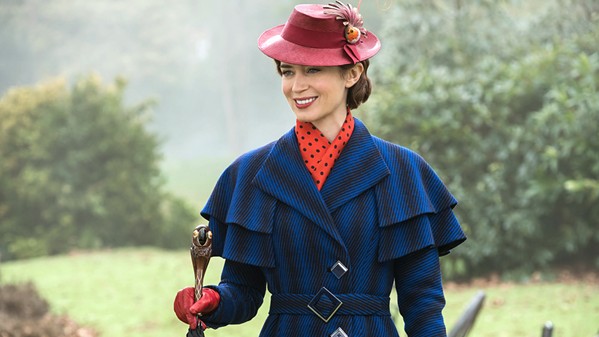 Glen I'm happy to report that this sequel—54 years after the original!—is just as wonderful and magical as the first one. Rob Marshall and company have truly done the original justice. The story, the music, the acting, the cinematography, the special effects, and the direction are all superb! With his beloved wife dead and his finances in a shambles, Michael Banks is adrift. The cupboard is nearly bare, and his house is being foreclosed on by the same bank he works for, which his father helped found. If a family ever needed a magical nanny, this one does. The film focuses on the Banks children learning important lessons about using their imaginations, accepting loss, and being brave. Meanwhile, in an effort to save his house, Michael and his sister, Jane, frantically search for a missing stock certificate while the bank president, William "Weatherall" Wilkins (Colin Firth), pays Michael and Jane lip service about wanting to help them but is actually conniving behind their backs to steal their family home. Like the original, the film mixes live action with animation. There are a lot of spectacular song and dance sequences, my favorite being a big number with a troupe of lamplighters riding bikes and dancing to "Trip a Little Light Fantastic," one of 10 terrific original songs in the film written by Marc Shaiman and Scott Wittman. Color me surprised and impressed!

Anna I'm so incredibly happy that this film did its predecessor justice and brought its own flair to the big screen as well. Poppins is an iconic character, and I can't help but picture Julie Andrews when I hear the name, but Emily Blunt is just as charming and perfectly posed as the practically-perfect-in-every-way nanny. Equally iconic is Dick Van Dyke's chimney sweep character Bert, taken over in Mary Poppins Returns by Miranda's Jack, a sweet and silly tagalong to all of the adventures Poppins and the Banks children embark on. The soundtrack is really dynamic, from big and bold to quiet and tender; the songs had me laughing then tearful from one minute to the next. I was a bit nervous about this one as the original Mary Poppins is near and dear to me. I watched it pretty obsessively as a child (and, honestly, as a stoned teenager—those animation scenes are crazy!). I trusted Blunt to be spectacular in all she does, and she doesn't disappoint. Magic is in the air, and when Mary Poppins comes to call you know things are going to work out just fine, and once again it does. I'll be re-watching this one. It was too much fun to view just once.

Glen I thought Blunt was perfect, and she's got a lovely voice to boot. She certainly takes cues from Julie Andrews' performance. After all, it's supposed to be the same character. I was also wowed by Miranda, who I only know of from his Broadway musical, Hamilton. I can see from his résumé that he's done a few films and a lot of TV, but this role is definitely his star turn. He adopts a cockney accent and sings and dances his way into the hearts of the Banks children as well as spinster Jane Banks. Meryl Streep pops up for a great cameo as Cousin Topsy, who teaches the kids to see life from more than one angle. I also loved the last-minute cameo by the original's costar, Van Dyke, who might be 93-years-old but can still dance and sing and shoot twinkles out of his eyes. The always-welcome Angela Lansbury also shows up at the end as the Balloon Lady. This film is a nostalgia-fest for parents and an introduction to a new world of wonder for kids. If I had some little ones, I'd take them straight to the theater to see this film and then straight to the record store to buy the soundtrack. Mary Poppins Returns is an instant classic! 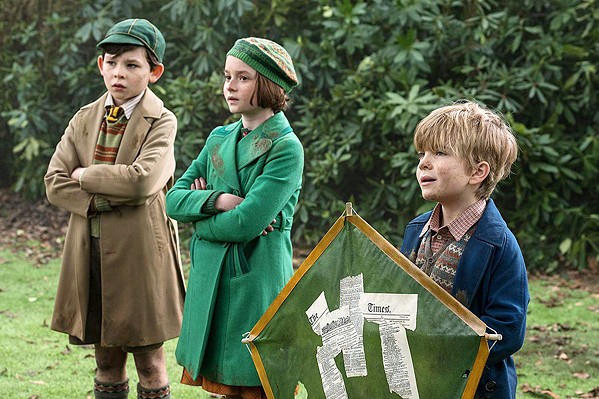 Anna The cameos were a lot of fun. I always appreciate a "kids" movie that pulls off being genuinely enjoyable for adults too, and this one hits that sweet spot dead on. At no point was I bored—the sensory feast for the eyes and ears flew by and left me both satisfied and wanting more. One of the animated scenes was particularly fun. The children and Poppins venture into the world of a cracked bowl after a mishap to help the painted characters repair the damage. What follows is a raucous ride, an over-the-top cabaret, and a nasty wolf whose wily ways teach the Banks children the truth behind the phrase, "Don't judge a book by its cover." From the out-of-this-world colors, to the nostalgic similarities to the prior film, it all just works. I loved Streep's character, Topsy, as well, and the musical number that accompanies the scene is fantastic. This movie is just a ton of fun—showy yet sentimental, sweet, and silly. Get to the theater and bring the kids along—this one is meant for everyone! Δ