The rattling tinkle of ice furiously tumbling in a metal shaker is drowned out by voices colliding against the tall rough-hewn timber and brick walls of a cozy cocktail bar in downtown Arroyo Grande on a Friday night.

A July evening breeze eases in from a warehouse-door-sized open window overlooking the sidewalk. People stand by the entrance, waiting for a table or a seat at the bar, peering into what could easily be a dimly lit, smoke-filled basement speakeasy. A sort of mod—not necessarily hipster—1920s vibe leaks down from rows of filament light bulbs covered with mason jars.

“The Village needed a spot like this,” says Steve Tolley, sitting at the bar to my right. “An adult place for adults to go have a drink.”

He just finished telling me about the chile verde enchiladas. They’re his favorite. Since the Mason Bar opened two months ago, he and his wife shimmy up to the bar regularly. What’s he drinking?

“A margarita,” he says. “The best margarita.”

The bluesy-rock, raucous sounds of not-so-poppy Black Keys permeates the silent spots between sentences and questions. It’s “Goodbye Babylon” from their Magic Potion album: the album that got me hooked.

What am I drinking?

A Manhattan. It’s been a while, and as I stare at ice dropping into a pool of Four Roses Bourbon, I know why. It’s a dangerously fantastic cocktail. One I’ve always loved. And this one’s aged. 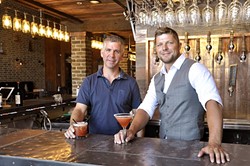 Restaurant manager Dustin Winkelpleck, who was a Giuseppe’s staple for the past 10 years, says barrel-aging cocktails is great because it takes the edge off alcohols like bourbon and gin, giving ingredients time to meld and mature. Miniature oak barrels breathe that cocktail in and out of pores, the same way bourbons and whiskeys did before they hit the bar shelves. Subtle vanillas and caramels edge out the harsher flavors.

The barrels are stacked on shelves at one end of the bar. Negroni—New Amsterdam gin, vermouth, Campari, with an orange twist—is in one of them. Not everyone likes gin’s in-your-face herbal-infused heat, but Winkelpleck says the aged negroni will, and has, turned gin-haters into gin-lovers.

Mason Bar owner Daryl Cope of the Rooster Creek family started his restaurant career in the early ’90s, tending Santa Barbara bars on State Street, where they used to sling drinks as fast as they could. Tequila shots. Rum and cokes. Jaegermeister shots. The occasional gin and tonic.

“When I was bartending, I never would have dreamed of barrel-aging my own cocktails,” Cope says. Then, he referred to the “new age” bartenders—like Winkelpleck—working Mason’s cocktail menu. “It’s amazing what they’re doing these days. … It’s kind of fun.”

Although, Cope did say, back on State Street, they also served up the occasional lemon drop.

The tweak happens to make Mason’s lemon drop an even-keeled, fresh, fruity beauty—coloring the martini glass pink with a soft white sugared rim, minus the sickly sweet that brings on after-cocktail headaches. It’s a strawberry-basil lemon drop, and ingredients are straight from the farmers’ market. Well, except for the Platinum vodka and probably the ice.

Restaurant chefs hit up the markets twice a week to bring back the goods for items like the Chef’s Burger: prime rib eye on a house-baked rosemary brioche with shoestring potatoes, smoked gouda, heirloom tomato, and bourbon caramelized onions. Or the Market Salad: blue cheese, barbecued walnuts, Mary’s organic chicken breast, and a white wine peach vinaigrette with balsamic reduction.

“We kind of go with what’s in season,” Winkelpleck says. “Even down to the cocktails. Peaches are in season right now, and so we have a peach julep.”

Rosemary simple syrup, muddled peaches, and Buffalo Trace whiskey. It’s strong, even for me. But it’s also, like all the other drinks I’m trying, not too sweet. And, like everything on the Mason Bar’s menu, it’s subject to change. Winkelpleck says the menu was revamped weekly at first, but as they figure out what works—and customers are vocal about what they like—those menus are starting to solidify somewhat.

A big hit are the lobster corndogs. Can you taste it? Light, succulent, salty sweet meat dipped in corndog batter and fried. Brought to you with a tasty remoulade to dip them in. Initially, it was one of those menu experiments.

“We took them off the menu for like four days,” Winkelpleck says. “I thought they were going to burn the place down. Everyone was freaking out.”

You’ll be happy to know that the lobster corndogs are on the menu to stay, but the plan is to keep the majority of the menu seasonal, with the whim of twice weekly farmers’ markets ruling its flavor. Basically, the Mason Bar’s not afraid to try things, to change things, to experiment. If it doesn’t work, scrap it. If it does, then you get yourself a Rabbit Chaser—a high-end greyhound with house-made grapefruitcello.

And it is exactly what Tolley with the margarita says it is: a place for adults to go, which, according to Cope, is the point. There isn’t a kids menu, so although kids aren’t explicitly barred from Mason, they do need a somewhat refined palate. On this July evening, there isn’t a single person under 21 in the place. In fact, most are probably older than 30.

Cope says this is the kind of place that The Village was missing. A place where bartenders wear vests and hand mix old school cocktails; bottles of high-end liquor are scattered across a wall, lit up from behind; mason jars hang from the ceiling; and it’s easy to enjoy a conversation with a friend—or a stranger—over drinks, without shouting at them.

“This is … an adult playground,” Cope says.

Editor Camillia Lanham is always ready for a cocktail. Reach her at clanham@newtimesslo.com.