Despite the best efforts of the prosecution, the jury in the criminal case against a San Luis Obispo firefighter couldn’t reach an agreement as to who was the aggressor in a brutal June 2011 bar fight. 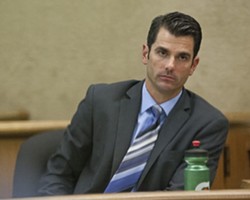 On Sept. 27, jurors split 8-4 in favor of exoneration for John Ryan Mason after a trial that lasted about three weeks and saw both the prosecution and defense call some 38 witnesses to the stand, including the alleged victim and defendant.

Following the verdict, both parties quickly filed out of the courtroom without speaking to press. Jurors also reached an agreement not to speak about the case that day.

That decision was only for that day, according to Kevin Hunt, who later identified himself as a juror and spoke via telephone to New Times.

According to Hunt, jurors debated both felony charges of assault and battery, and despite the major injuries Los Osos resident Jory Brigham sustained in the altercation, even the battery charge didn’t seem to be proven in court.

Furthermore, it seemed it was the four witnesses who each saw parts of the incident in the bathroom who held more credence than Mason or even Brigham as witnesses.

“Mainly, it was more with the prosecution that they could have done a better job,” Hunt told New Times. “We all felt sorry that Jory was hurt, but it’s hard … he didn’t help us much either.”

“I thought [the trial] went exceptionally well, although I obviously was disappointed we could not receive a unanimous verdict,” Mason’s attorney, Chris Casciola, told New Times.

Where the case goes from here is uncertain; both parties have a scheduled Oct. 28 hearing in San Luis Obispo Superior Court, where the District Attorney’s Office has the option to re-file charges against Mason.

“My hope is that they’ll save our county taxpayers’ time and money [by not retrying the case],” Casciola said.