Mason trial feels as brutal as the alleged crime

As both the prosecution and defense rested their cases Sept. 24, the packed courtroom drew a breath of relief. 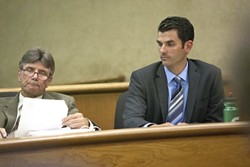 It was an awkward trial, to say the least, full of deeply private issues discussed in front of strangers. Friends have turned against friends, marital discretions have been rehashed in a public forum, and even a New Times reporter felt uncomfortable at times.

The last person to take the stand was Mason himself, claiming that the alleged victim, Los Osos furniture maker Jory Brigham, was the aggressor in the late-night incident. Mason said he feared for his own safety.

Under cross-examination by prosecutor Kristy Imel, Mason had to explain why he fled the scene without waiting for law enforcement officials to arrive. He claimed the bar was full of Brigham’s friends and that he feared a bigger fight might break out. Mason’s wife had previously testified that Mason told her upon his leaving the bathroom, “It’s not safe here.”

In emotional closing arguments, Mason’s attorney, Chris Casciola, choked up as he described how a fearful Mason came to his home, afraid for the fate of his job and family in light of the charges.

Casciola invoked the classic Christmas Story, where protagonist Ralphie beat up his long-time bully, and how—had police arrived at that pivotal moment—Ralphie would have likely been perceived as the aggressor.

Casciola also described Brigham as a “talker” who was pressing the issue about Mason’s alleged marital problems, and who played the role of “moral police,” after becoming inebriated by drinking “top-shelf” tequila, Cazadores.

“It’s not a drink you sip, it’s a drink to get hammered,” Casciola said. “He started the fight, and now he refuses to admit it.”

Cazadores is, in fact, not top-shelf—as any New Times reporter will attest—but Casciola argued it gave Brigham “liquid courage” to confront Mason. He further alleged that Brigham had retained an attorney to pursue Mason for civil damages, which was never proven in court.

“He used the district attorney’s office as his tool,” Casciola told jurors. “Don’t be used by Jory Brigham. Don’t be a tool of Jory Brigham.”

“Think to yourself: Is this reasonable?” Imel asked jurors. “There is no question that the injuries [to Brigham] were overwhelming and devastating. And now [Mason] is trying to minimize what he did to Jory. It’s insulting.”

As of press time, the jury remained in deliberation. Check newtimesslo.com for updates as they become available.