Morro Bay's harbor director is stepping down after 20 years 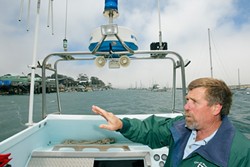 His hands steady on the helm of a sleek Harbor Patrol boat as a stiff wind whipped up whitecaps, Harbor Director Rick Algert carefully backed the vessel into its slip, winning kudos from his staff for a “no-touchy.” After 20 years of steering the activities on Morro Bay’s harbor, Algert will soon give up the helm.

So far there’s no word about whether he’ll be replaced, and city officials remain tight-lipped. The Morro Bay City Council discussed the issue in a closed session on June 14, and councilmembers are due to consider a report on reorganizing the Harbor Department on June 28, three days after Algert’s retirement.

From the bottom of the deepest channel to the tip of the highest roof along the waterfront, Algert knows Morro Bay like the back of his own steady hands, overseeing everything from fish landings to visiting yachts, from pier-side pump-outs to a new waterfront boardwalk.

“There’s a lot more than just driving a boat all day,” he said, adding, “There’s a lot of paper-pushing.” His cramped office is a silent testimony to that fact, the desk and floor stacked with mounds of reports and files.

And there’s a lot of meetings. Over the years, Algert has become the voice of the harbor, advocating for the local fishing community at countless federal, state, and local meetings.

The focus of the Harbor Department he runs isn’t just on the water. Algert is also responsible for leasing out the city’s waterfront to the dozens of businesses sited there. The money generated pays for the services the Harbor Patrol provides, such as emergency rescues. Every year, Algert has managed to maintain a balanced budget—$1.8 million this year.

“And not a penny comes from taxes,” he said.

Out on the water, a boat trip around the harbor gave an indication of the range of activities involving the Harbor Department, with Harbor Patrol manager Eric Endersby and business coordinator Sue Lichtenbaum also along for the ride.

The Harbor Patrol boat glided past the hulking shape of Morro Rock, where a graffiti removal project was nearly complete. At the harbor entrance, the U.S. Army Corps of Engineers dredge, the Yaquina, continued its 24/7 operation, digging out sand to clear the channel next to the breakwater.

“[Congressmember] Lois Capps fought hard to get the funding for dredging all the channels in the harbor,” Algert said. “She’s always had a special place in her heart for Morro Bay, ever since she first came here with [her late husband and former Congressmember] Walter. We took them out on the water, and we got his feet wet—I remember he was wearing probably a $200 pair of Italian shoes,” he laughed.

A smaller dredge was moored inside the harbor, waiting to return to channel-clearing work later this summer. Algert and Lichtenbaum discussed the fee they’ll collect for the watery parking spot: $150 a day.

Fog came out of nowhere to obscure the top of Morro Rock as the wind intensified, churning the sparkling blue water to gray. Algert waved to the crew of a gleaming white yacht from the Cayman Islands before heading closer to the shore along the southern Embarcadero, where workers were busy replacing rotting pilings on a short jetty.

“Are you going to cut it off there? It looks good,” he called out.

Many of the old wooden buildings along the waterfront have been redeveloped over the years, with more in the works. Each time, the Harbor Department requires what’s known as “lateral access,” where a wide pedestrian boardwalk is taking shape along the edge.

“The boardwalk has gotten a lot of compliments. It’s a huge hit,” he said as he pointed out the next area where it will be extended.

Still, he said, fishing is looking up, compared to being “almost dead” a few years ago. Fish landings have doubled in value, thanks to the development of the black cod fishery and the efforts of The Nature Conservancy, working with local fishermen to sustainably harvest local fish.

Guiding the boat along the waterfront, he told Endersby and Lichtenbaum that a local oyster company wants to find a site where its customers can enjoy a picnic.

At Tidelands Park pier, the heavily used sewage pump-out is now back in business after a blockage. “It’s hard to maintain,” he said. “People put all kinds of things down it. Eric once had to pull out a paperback book!”

Years ago, the harbor waters extended to the base of the bluff above Tidelands Park. All that changed during World War II, when the U.S. Navy installed a long rock wall, creating the Embarcadero and the waterfront land you see today. With the fear of a Japanese invasion, the Navy also built first one and then another rock breakwater in an effort to create a better harbor entrance by Morro Rock.

“They started building the harbor without any design, in that environment,” Algert explained. “The first plan was to make it a submarine base. You hear apocryphal rumors of secret submarines by the Rock, but they’re not true. The Navy realized that Morro Bay isn’t deep enough for submarines, so they created a landing-craft training base instead.”

Various development schemes for the harbor and the sand spit were put forward in the decades after the war, including one plan to build a bridge and an entertainment park on the sand spit, and thousands of boat slips. Once the city of Morro Bay was incorporated in 1964, city leaders decided that the harbor would see no major development.

As he spun the boat around to back it into its slip, Algert said, “I feel like the luckiest guy in the world. I know it sounds corny, but I found something I like, being of service.”

Soon, though, he’ll step off the patrol boat for the last time, heading to his boat-like, curved-beam house and future vineyard in the hills of west Templeton.

Contributing journalist Kathy Johnston can be reached at kjohnston@newtimesslo.com.