The peak of Beatlemania in England was a time to twist and shout to the rock ’n’ roll melodies that emerged from the fab four in 1963.

It was also the year that Laurence Juber finally got a guitar for his 11th birthday after nagging his parents for one. This new band and the new twangy sounds of the guitar convinced Juber that he wanted to pick up this instrument and learn to play. 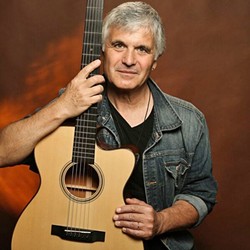 He started his music career playing in a local bandstand at weddings and events back home in London. After attending London’s Goldsmith’s College to study music, Juber was a featured guitar soloist with the National Youth Jazz Orchestra. His career took a turn in 1978 when he was recruited to play in Wings, also known as Paul McCartney and Wings, by Denny Laine, former Moody Blues guitarist and then current member of the Wings band. Juber said that performing with a former Beatle was “cool on many levels.” He also got the chance to work with George Harrison and Ringo Starr—all three experiences he calls an amazing education.

“I like to say that I got my master’s degree from McCartney University,” Juber said.

While Juber’s Beatles days are behind him, guitar fiends and music lovers alike can look forward to Juber performing in Morro Bay on Dec. 8 at The Siren. The show will benefit Infinite Music, a foundation in support of innovative music programs and events for children. With the recent release of his new Christmas album Holidays and Hollynights, Juber will perform solo pieces as well as play with his bandmates in The Laurence Juber Trio. The audience can also expect to hear Juber’s take on the jangly sounds of The Beatles music.

Working with musicians like McCartney gave Juber the chance to learn how to be an artist, not just a backup musician, by being part of the creation, sounds, and emotions of the music. Rather than being star struck, Juber said he was at a certain point in his professional career that he thought it was cool to be working with these artists but wanted to focus on creating music.

“As far as being on stage with Paul and it’s like, ‘Wow this is really cool, but wait a minute I’ve got a guitar solo to play here,’” he said.

Wings disbanded in 1981, and Juber decided to move to New York. He met his wife, Hope, a California native, in the Big Apple, which prompted his move to Los Angeles where he established himself as a studio musician once again.

Juber can be heard on soundtracks from TV shows such as Home Improvement, Happy Days, and 7th Heaven, to name a few. He has also worked on music for motion picture soundtracks such as Dirty Dancing, Good Will Hunting, and Pocahontas.

Gradually Juber worked on his own compositions as well as covering The Beatles music with his signature twist.

“It’s taking a Beatles song and deconstructing it and rearranging it on a solo acoustic guitar,” he said. “It’s a lot of fun, and audiences like it because they get to hear familiar tunes in a slightly different way.”

With each strum of his guitar Juber has accomplished some of his musical ambitions by learning to master his instrument, playing with The Beatles, and becoming a studio musician.

“It’s all interconnected. I mean I live in this musical space and I’m just blessed to be able to play guitar and be able to apply myself to whatever the circumstances may be,” he said.

Karen Garcia is twisting and shouting at kgarcia@newtimesslo.com.