A shift in the path of higher education is taking place in California as career and technical education (CTE) gains more support. Here on the Central Coast, students are gaining skills at the high school and junior college level because of one CTE program—SkillsUSA.

John Cascamo, dean of workforce and economic development at Cuesta College, told New Times about a conversation that changed his perspective on the necessity of a bachelor’s degree for career success. He was chatting with his uncle on the ride home from his father’s funeral 12 years ago.

His father had a career in welding and his uncle in plumbing. Cascamo asked his uncle why Cascamo was never taught to study a trade.

“He paused and said, ‘Well you know your grandfather came from Italy and he came here with no money, no language, and the only option for him was the factories,’” Cascamo said, “‘and he told us when we were coming up that the trades would be our way out.’” 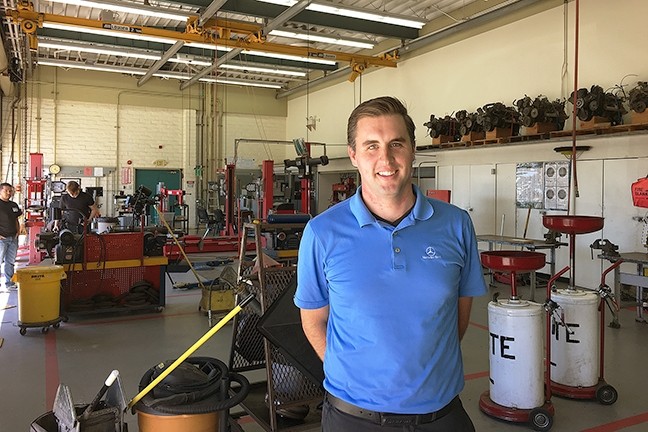 Cascamo’s uncle, on the other hand, wanted his children to be successful by way of a college education. After a few minutes of silence, his uncle asked Cascamo how much he made as an educator.

“And he said, ‘You borrowed money, you borrowed money to get a job like that?’” Cascamo said, “‘Do you know that all I would have to do is install two hot water heaters a week to make what you make in a year?’”

Cascamo said that the lesson he learned from that conversation with his uncle was that society has created this artificial expectation that having a successful career means getting a college degree. With that career path, traditionally, junior college is seen as just a stepping stone, he said, for students to transfer and continue their path of obtaining higher education.

That doesn’t have to be the case for some Central Coast students, as many are participating in the SkillsUSA program offered at certain high schools, Cuesta College, and Allan Hancock College. The program trains students in specialized skills and includes general education as part of the plan.

Kinesiology, criminal justice, nursing, and business administration are just a few examples of specialized areas of training. Automotive training caught the attention of former Cuesta College student Daniel Lehmkuhl as a possible career path. He had a passion for working on cars since he was a child and joined SkillsUSA at his high school to see if that was something he wanted to do professionally.

The program prepared him for the start of his career as an automotive technician and currently as the director of parts and service at a local car dealership.

Lehmkuhl told New Times that he feels he has been able to achieve what he would consider a significant success by taking the CTE path.

“But I have not had to go to a four-year college and earn a bachelor’s degree,” he said. “Not that there’s anything wrong with it, but for me, I found that my passion, my drive came from vocational trades.”

It’s important for students at the high school level to understand that a four-year career path isn’t their only option said Randy Fiser, CTE teacher at Arroyo Grande High School. Fiser said that programs such as SkillsUSA are helpful to students who aren’t sure of what career path they want or if they want to pursue a skill at the university level.

“So many high school kids and even college kids don’t even know what they want to do,” Fiser said, “College kids have a major but sometimes it’s chosen because they didn’t know what else to do.”

• Cambria Christmas Market is now running until Dec. 23. Friends and family can enjoy the display of vibrant lights and vendors. Festivities are from 5 to 9 p.m. at 2905 Burton Drive in Cambria. For ticket information visit cambriachristmasmarket.com.