Masters of the stage

Revolution is alive and well at PCPA 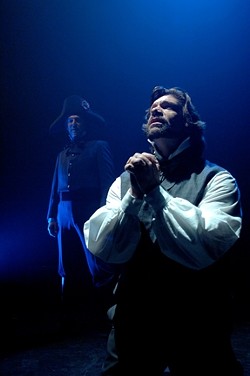 Perhaps my favorite thing about PCPA, besides eavesdropping on the conversations of fellow audience members that precede each play, is the fact that once you are somewhat familiar with the company, you begin to compare the actors’ roles in various productions, often with comedic or surprising results. Erik Stein, for example, assumes the role of Javert in the company’s current production of Les Miserables; a year and a half ago, the guest actor stalked the stage in the same black boots as the incorrigible Officer Lockstock in Urinetown.

“Javert is the cop that Lockstock thought he was,” Stein explains, comparing the two roles. There is little resemblance between the two characters in terms of personality, beyond an obvious proclivity towards law enforcement, though both serve as a highly visible appendage of the establishment, the merciless bourgeois. Caught beneath the establishment’s endlessly churning wheels, the monotonous, joyless cycle of endless poverty, is a class of people not quite as funny as Urinetown’s poor, but more compelling.

Victor Hugo’s characters and individual plot lines are undeniably winning. In particular, Valerie Rachelle’s Fantine has such a truthful, human quality that her presence seems to linger over her child and child’s protector long after her death and Andrew Philpot and Elizabeth Stuart are as bawdy, raucous, and flamboyant a Thenardier and Madame Thenardier as any production could hope for, a most welcome comic respite from the life and death struggle that consumes every moment and inch of the stage. Fantine’s “I Dreamed a Dream,” culminating in the prophetic “there are dreams that cannot be and there are storms we cannot weather” perfectly expresses that dark, sad, human hour when disenchantment conspires with defeat to overwhelm an otherwise beautiful person.

The queen of the tragic hero, in a play that is rife with them, is the luckless, loveless Eponine, played beautifully to her noble and pitiful end by Christine Alvarez. In the spirit of full disclosure, I must confess that the character of Eponine has always captured my affection and sympathy more than the cosseted and pampered Cosette. Eponine is resilient, a survivor, who—most importantly—somehow manages to retain decency and compassion in a world that has little use for either. If I have one fault with Hugo, it is that he has his dashing young student Marius, played by Michael Jenkinson, favor the wealthy Cosette (Vanessa Ballam). Eponine’s “On My Own” echoes Fantine’s “I Dreamed a Dream” as an elegy for a life that cannot be, equally stirring.

Despite the significance of these personal narratives, the production’s strength is in its numbers. A dozen voices pleading to heaven for mercy, or recognizing, brokenly, that no aid will come is innately more powerful than the cries of one, or even a few. “Look down, look down, sweet Jesus doesn’t care,” an ensemble of prisoners cry in a deep, mournful timbre that can’t fail to elicit sympathy. And the comic potential of both “Lovely Ladies” and “Master of the House” can only be exploited by an ensemble of performers, all acting, singing, and dancing. 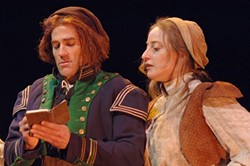 It is the students, and their rousing call to arms, that most effectively pulls the spotlight from the individual, casting the suffering of each character within a broader historical context. They negate their own significance as individuals—delivering what is essentially an historic “bros before hos” plea to Marius. They waver between the sense of impending loss, exemplified in the lyric “drink with me to days gone by” and faith in their strength and right—“damn their warnings, damn their lies, they will see the people rise.” And because of their sacrifice, their youthful courage and fear, they are impossible to forget.
In fact, confronted with the entire ensemble—living and dead—demanding, “do you hear the people singing, singing a song of angry men,” I readily would have committed myself to war, revolution, to the idealism and hope encapsulated within their blood-red flag. No movie, or book could produce the same stirring of blood and heart, not because these mediums are less worthy, but simply because neither pages nor film will ever be flesh. And Les Miserables is, first and foremost, a tale of what it means to be human, proclaiming proudly as its motto, “to love another person is to see the face of God.” Somehow, even to an agnostic, that rings right and true.

And if a tale of hope, redemption, and revolution somehow fails to tug at the heartstrings, the character of Jean Valjean is played by Sam Zeller, who played Ch’Targh in an episode of Star Trek: Deep Space Nine. Where masterful art fails, a cult fan base will often prevail. ∆

Arts Editor Ashley Schwellenbach has a feminist, and completely inappropriate response to bros before hos. Send question marks to aschwellenbach@newtimesslo.com.