For several years now artist Fred Ventura, who’s an ARTS Obispo board member, has hosted an annual party in celebration of Pi Day. Anyone who just began salivating is in for a rude awakening. Pi Day commemorates math, and more specifically the number 3.14, which is the rounded result from dividing the circumference of a circle by its diameter. Now you’re no longer hungry, but probably feeling the early twitches of a headache.

Celebrants bring circular food—pies, cheese, cubed vegetables—and solve mathematical puzzles and equations. Those who have a sense of humor often wear taped glasses and pocket protectors to the party, embracing their reputations as nerds. This year, Ventura is extending an invitation to the entire county to embrace your inner nerd by paying a visit to ARTS Obispo’s exhibit, “Pi Art: A Celebration of Art and Mathematics,” running through March 25.

“The exhibition is an attempt to bring together two diverse cultures, mathematics and artists,” explained Ventura. “In researching the intertwined influences of mathematics and art, I realized that even the earliest signs of human artistic expression involved mathematical communication.”

High-school students, teachers, and artists are among those contributing pieces to the show, which culminates in a special Pi Day Reception on March 14. Annamarie Fella, a geometry teacher at San Luis Obispo High School, was one of the first to receive an invitation to submit her work. She’s never had any formal artistic training, or even exhibited in SLO County. But she has participated in the Open Studios tour and her father, Ed Fella, a well-known graphic designer, helped spark an early interest in art. She recalls seeing markers in her father’s studio and being compelled to draw something with them.

Fella’s art is simple, in that she works exclusively with the most basic shape in the world: the circle. Starting with a single circle, she expands outward, slowly, patiently, drawing circles inside circles inside circles. The finished piece might have hundreds, clinging together, branching and bubbling as only a canvas filled with circles can do.

“My idea is to just put so many circles that it gets crazy. The circle is powerful because it’s symmetrical,” explained Fella. “As I’m doing it, if I mess up, that’s it. The whole thing is ruined. It’s like a performance.”

When Fella began her circle constructions she mostly worked with PhotoShop. Each click of the mouse represented a new circle. Sometimes people were dismissive when they realized her art had been made digitally, and she began to turn more and more to drawing by hand. In some pieces the colors are monochromatic, and in others a psychedelic rainbow confronts the eye. Especially in her digital renderings, the pattern resembles a kaleidoscope. The pieces with fewer colors remind Fella of growths of crystals.

During the summer, when she doesn’t teach, Fella becomes completely absorbed in her art. She’ll draw circles for days at a time, from 10 a.m. to 4 a.m. For her, at least, math is visual. She is doing math in her drawings, even if they aren’t mapped out like a traditional equation.

“Sometimes I try to see other things in them besides math,” she said. “Once in awhile I see seasons. Maybe I’m just more of a process artist than a conceptual artist. The funny thing is, I can’t draw a figure. I can’t make anything look real. I don’t want it to look real. I just want to use the markers.”

Then there’s Brian Claverie, a ceramics instructor at Nipomo High School who met Ventura when he attended Claverie’s adult education ceramics course. When Ventura invited Claverie to submit work for the exhibit, he had to take a minute to consider whether his artist’s brain could enter the realm of left-brain thinkers. A few minutes, and an explosion of ideas later, he decided that it could.

“It’s kind of fun to take things that are polar opposites and put them together,” explained Claverie. “I have to make stuff. It’s just part of who I am.”

Despite having a master’s degree in painting, Claverie initially had a difficult time finding a job in the arts. Teaching ceramics to high-school students was a good solution. In fact, over the course of his teaching career, ceramics became his primary medium. So, when he needed to come up with an idea for a math-based ceramics piece, Claverie turned to an assignment he gave his students. He would make a ceramic clock. But, instead of the traditional integers 1 through 12 marking the hours, Claverie used equations. At the clock’s base the equation reads (1 divided by 8) times (96 divided by 2). And at its zenith the equation is 24 divided by 2. 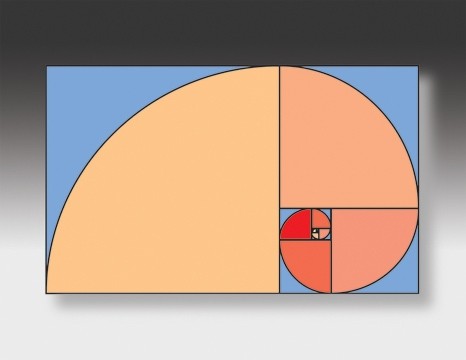 Before beginning work on the clock, Claverie googled math clocks and found a timepiece with equations. Some of these equations he used in his own clock, though he simplified some as well. He wanted someone with even a basic grasp of math to be able to read the clock.

Claverie’s second submission is based on the concept of stacking mathematical symbols, such as pi and the image that represents division. The pairing may serve as a reminder that math and art aren’t as disparate as they seem. Or, the artists in the room may appreciate the aesthetics of the exhibit while the mathematicians geek out on equations.

“Some artists are absolutely terrible with math,” Claverie laughed. “I’m kind of in the middle. I think the symbols they use are really fascinating.”