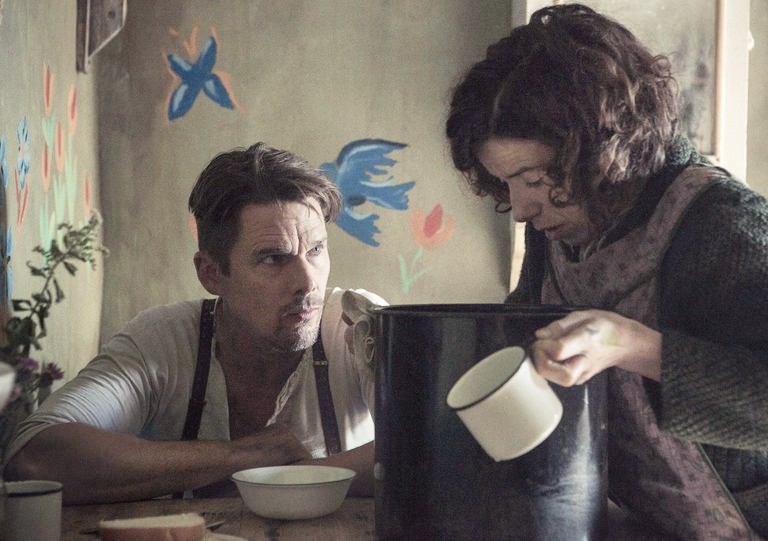 Aisling Walsh (Joyriders, Song for Raggy Boy, The Daisy Chain) directs this screenplay by Sherry White (The Breadmaker, Down to the Dirt, Crackie) about arthritic Nova Scotia painter Maud Dowley (Sally Hawkins), who after having her family home sold out from under her by her brother takes up housekeeping work for Everett Lewis (Ethan Hawke). Eventually the two find romance as Maudie hones her naïve but charming folk painting style, eventually becoming a community icon.

First and foremost, this is a love story, albeit a very unconventional one. Because of Maudie’s affliction, her family—brother, Charles (Zachary Bennett), and her aunt, Ida (Gabrielle Rose)—believes she’s incapable of taking care of herself, but Maudie has an indomitable spirit, and rather than live under her aunt’s thumb, she answers an ad for a housekeeper.

Everett is a 40-year-old bachelor, taciturn, illiterate, and proud. He’s a hard worker who sells fish door-to-door, cuts and sells wood, removes trash, and works in the orphanage where he was raised. He’s pretty hard to like at first, and though he reluctantly hires Maudie, he treats her poorly.

“It’s me, these dogs, those chickens, and then you,” he informs her of the pecking order.

They live in a one-room shack, sharing a bed in a sleeping loft. As a form of escape and a way of celebrating the beauty she sees around her, she paints on any surface she can find, including old card stock, painting little postcard scenes that she sells for a few pennies.

These are beautifully rendered characters by screenwriter Sherry White, and while biographical, from what I’ve read about Maud and Everett, she may have taken some liberties. Everett is written as being very dismissive of Maud’s work, when in fact, in real life he encouraged her to paint. If you’re looking for historical accuracy, this probably isn’t quite right, but as a story of two people coming to realize they love and need each other, it’s exceedingly beautiful. Tissues recommended!

The acting is uniformly excellent, with Hawkins twisting her body and face into a knotted mess. She does a very fine job of embodying Maudie, depicting her strong spirit and resilience.

Hawke, too, is excellent, playing Everett as a stiff and angry brute who softens to Maud. His Everett longs to be close to someone, but as an orphan and bachelor, he has no experience.

Vacationing New Yorker Sandra (Kari Matchett) takes an interest in Maudie’s work, and helps build her confidence, and the entire story takes place over several decades, from the late ’30s to 1970 when Maud dies.

The small fishing village becomes a character as well, and its seasonal changes move from a fly-infested summer to an unforgiving winter. The people who live there are tough and sometimes gossipy and cruel, and it all feels like real life—the highest compliment I can pay a film.
(115 min.)