Courtesy Photos By Teresa Lojacono HEIRLOOM Designed to last, Emma Thieme's leather bags are made with high quality materials, hand-dyed leather, and an eye for detail.

Visit Maven Leather + Design at 146 N. Ocean Ave, suite B, Cayucos. The storefront's fall hours are 11 a.m. to 5 p.m., closed on Tuesdays. For more information, and to watch the studio's creative and funny short film, visit mavenleather.com. To set up an appointment, contact emma@mavenleather.com.

There's something about leather—its durability, its unique blemishes, its primal appeal to the ancient human deep inside us all. It's the sort of material that becomes an heirloom—your grandfather's World War II bomber jacket, the small clutch your mother carried to her prom, the scarred and battered over-the-shoulder satchel that held important papers a lifetime ago and still will a lifetime from now.

That's part of the appeal for Emma Thieme, who owns the Cayucos boutique shop Maven Leather + Design, where she makes and sells her original leather creations as well as furniture, jewelry, painting, and ceramics produced by local artists.

Thieme is a newcomer to the area, having opened her storefront at 146 N. Ocean Ave. almost a year ago. Originally from Maine, she drove across the country in her van with her dog, hitting arts and crafts shows, festivals, and farmers markets along the way.

"I was just trying out the traveling artist lifestyle for the winter—Maine kind of shuts down," Thieme said. "I had a little store there at the time, so I got into my van with my dog and drove."

She packed up her sewing machine, tools, and materials, and she traveled from one coast to the other.

"I was interested in seeing how far I could go doing that. I wanted to see if I could find my way to a new kind of opportunity. I was a little bit—I don't want to say stale, but in Maine I was feeling really burned out."

Let's back up a second because Thieme's path to fine leatherwork is an interesting one. 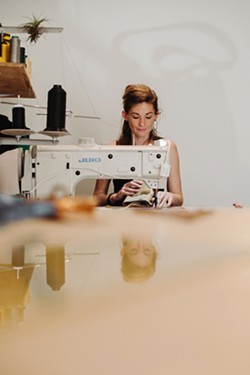 And amazingly, it didn't ruin their relationship.

"It's funny because when we look back on it now, she would get so frustrated with me because I would steal her fabric, and now as someone who collects leather and fabric, I understand how frustrating that would be, but I would take her fabric stash, and I never followed a pattern, and she's very meticulous—as am I but in a different way.

"She would never sew anything without a pattern," she continued. "I would just make up my patterns and they often wouldn't go the way that I wanted them to, and she definitely wished I would be a little bit more, I guess, respectful of tradition."

Thieme, who earned a B.A. in journalism in 2011, brought her sewing machine to college with her and began sewing leather after she got a bag of scraps from a friend. After graduation, she juggled freelance writing assignments as well as a full-time job bartending at The Wrinkled Pickle, a pub in Birch Harbor.

"I was living in Portland, Maine, and would often sell leather earrings on the sidewalk," she recalled.

From there she moved off the grid to a remote cabin in a part of Maine called Downeast.

"This is where I started to build roots as an artist in the community and began to fine-tune my craft. Nature and solitude have always been my biggest inspirations, so a simpler life in the woods has always called to me."

She also developed her eye for design in Maine.

"It's weird for me to have someone say and 'eye for design.' I think I just really need to work with my hands. I really love where I grew up, and people there are very utilitarian. They'll use anything that's around them to create what they need. I think that's where my eye for design comes from—looking around and seeing what I can use, and how it can be functional and useful." 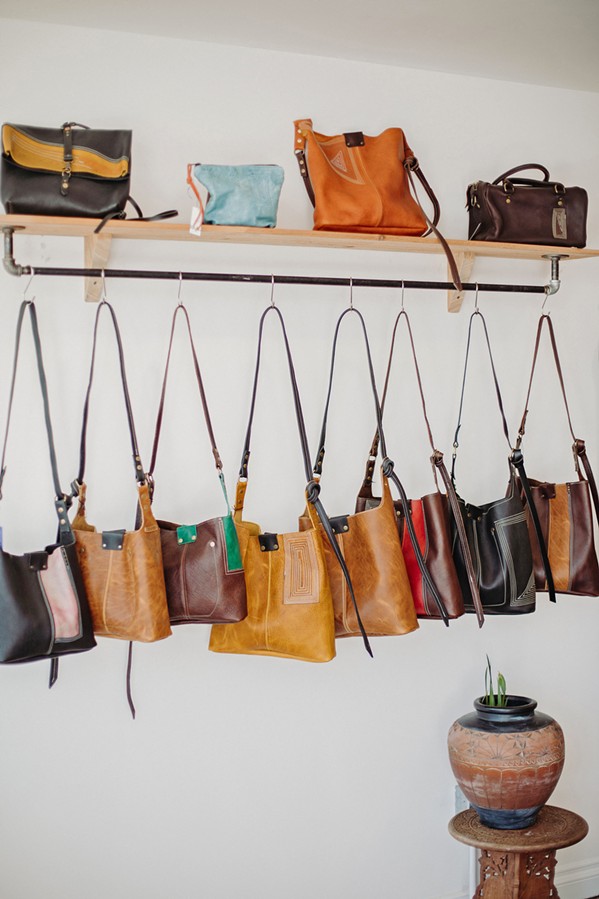 In 2015, Thieme moved to Hackensack, New Jersey, "to attend an intensive program in auto upholstery, always with the intention of focusing my training on custom motorcycle seats."

She was the only female student at the school, and it was there that she first operated an industrial sewing machine. After she finished the two-month course, her mom let her take over her sewing room to make custom motorcycle seats, and as her business grew, she eventually moved into "a humble, un-insulated workshop with a cement floor where I spent one very cold and busy winter."

"Every project was different. It was very custom. I had to create a pattern for every single job that I would take," she said. "I had to do something with my cutoffs and my scraps. I love fashion and style, and so naturally I'd just create bags for my friends or myself. That took over when I started getting accepted into fine arts and crafts shows."

For the next several years, she drove up and down the East Coast hitting shows. That's when the burnout hit.

"It's really difficult to do the show lifestyle where you're just constantly driving, setting up your entire space, and then you're breaking it down and driving back to the studio and creating."

That's when she decided to go West on her "indefinite cross-country trip." And when she finally arrived in Cayucos, "I felt inspired. I immediately felt at home. The [pandemic] shutdowns began, and I was pretty much taken in by the local community. I moved my studio into a Cayucos storefront that had been sitting vacant for some time and began sewing there. I put some designs out front for sale and kept the door open. People began to come in and support my work.

"The studio has since taken off, and I continue to feel welcomed by the community and energized by the landscape and artists around me."

Thieme now has employees, and she made a funny promotional black-comedy short film for her business called The Advertisement, which she wrote and Alex Raban of Room for Cream Films directed. The film, which is well worth the five-minute runtime, begins with a couple strolling through Cayucos who come upon Maven Leather + Design, and the woman swoons over a handbag in the window, leading her partner to complain, "Really, babe? You don't need another purse." Δ