May all your Christmases be white

The best things happen while you're dancing at PCPA's production of the musical, White Christmas

Isaac Stern, the violin virtuoso, once said, "America's music was born at his piano."

Irving Berlin, whom Stern was talking about, touted White Christmas as the best song he'd ever written, proclaiming, in fact, it was the best song "anybody had ever written!" This bold declaration came from the man who also wrote God Bless America, so his arrogance is forgiven. It is the holiday season, after all. 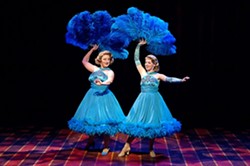 You can't tell the story of White Christmas without first touching upon the song that started it all, and the subsequent 1954 film starring Bing Crosby, Danny Kaye, Rosemary Clooney (yes, George's aunt) and Vera-Ellen. To this day, it is considered mandatory viewing in the classic seasonal cinema genre. It has stood the test of time.

The stage version, however, is just a wee toddler, having opened in 2004, with a current run on Broadway. Based on the film, this 3-D version, written by David Ives and Paul Blake, takes artistic license by adding to the story, and taking away as well.

White Christmas, now playing at PCPA (Pacific Conservatory of the Performing Arts) at Allan Hancock College in Santa Maria, is brimming with universally recognized themes and genres, yet oddly enough, not much white or Christmas. Comedy, romance, music, dance, twists and turns, and a dash of wartime era are its main ingredients.

The premise goes something like this: boys do well in the army, former General Waverly needs help, boys meet girls, and boys and girls do well all over again. All inspired by two little words, and one very big song.

Intense, comical, heartwarming: that is exactly what all four of the lead actors bring to the stage as the charismatic and charming WWII buddies turned song and dance men, and the sister act that ends up in Vermont at a picturesque inn.

Parke Morgan brings fresh emotion to his part as the leader of the foursome, Jenkinson brings the funny as the sidekick and schemer, and the ladies bring a bit of both.

The women are strong in their sister roles while totally at ease on stage. Stuart convincingly portrays the nostalgia of Betty, as well as her talent and goodness.

White Christmas is a production built on its dance numbers and, of course, the music is the heart and soul of the production. The story will draw audiences in, and imbue them with the holiday spirit.

The actors mingle with the audience in a very intimate and genuine experience. It isn't difficult in the moderately sized Marian Theater—it's neither too big nor too small and all the seats are prime. 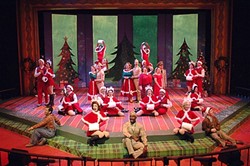 "Happy Holiday" is the opening number (which coincidentally was not in the film version but was performed in the classic film Holiday Inn, where the song "White Christmas" had its debut in 1942).

The stage is filled with bobby-soxer couples, and the women in vibrant dresses own the spectacular choreography, which is full of energy and Bob Fosse-esque style. Fosse's influence comes around again during the whimsical "Blue Skies" number—another tune written by Berlin. "I Love a Piano," which features the best set and costumes, hands down (besides the finale) takes tap dancing to a new level, all accomplished with huge smiles, and performers giving it their all.

The trip to Vermont, in the train car, (snow, snow, snow, snow!), a watershed moment, is better achieved on stage by PCPA with moving car seats, hilarious travelers, and the entire train car participating in the dance number.

You can't take your eyes off the stage as the foursome arrives at the fledgling, almost bankrupt, Columbia Inn, where they meet Martha, played with affection and no nonsense by acting veteran Kitty Balay Genge. Balay Genge's "Let me Sing" is one of the best performances in the musical.

Whether it's your twentieth, or first, time experiencing White Christmas, kids, grandparents, or college students will all feel welcomed to this very traditional, surprising, yet contemporary take on a classic.

Irving Berlin’s White Christmas is presented by PCPA through Dec. 21 at the Marian Theatre in Santa Maria, located at 800 S. College Drive (1100 S. Bradley if you use mapquest.com). Tickets range from $14-$29. For information and tickets call 922-8313 or visit pcpa.org.

Christy Heron has a lot of Christmas cards to write, travel plans to make, suitcases to pack, trees to trim, lists to make, books to write, and gifts to buy. Send her some merriness and brightness at cheron@newtimesslo.com.